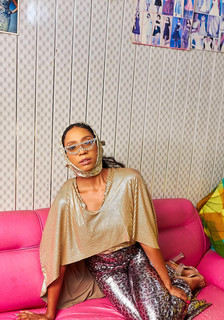 Y’akoto is a pseudonym of Jennifer Yaa Akoto Kieck (b. 1988 in Hamburg). “It feels so good to be restless.” (Moving) It is restlessness which drives her. There is this urge which impels her never to stand still and to keep growing and learning. The feeling of never arriving yet always being there. The conviction that one must lose oneself first in order to someday, find oneself. In the life of Y’akoto it is precisely this restlessness which has been the root and motive force behind all her wo...

Y’akoto is a pseudonym of Jennifer Yaa Akoto Kieck (b. 1988 in Hamburg).

“It feels so good to be restless.”
(Moving)

It is restlessness which drives her.
There is this urge which impels her never to stand still and to keep growing and learning. The feeling of never arriving yet always being there. The conviction that one must lose oneself first in order to someday, find oneself.
In the life of Y’akoto it is precisely this restlessness which has been the root and motive force behind all her work, the fount of her being and ultimately, the reason why her voice embodies so much more inherent depth, experience and life, than a singer of 23 years of age would otherwise, under normal circumstances, be endowed with. But let’s start at the beginning!

As the daughter of a Ghanaian father and a German mother, Jennifer Yaa Akoto was raised a cosmopolite from her infancy. She was born in Hamburg and grew up in Ghana with sojourns in Cameroun, Togo and Chad before finally ending up shuttling between Hamburg, Lomé and Paris, a wanderer between worlds, a modern-day nomad who has always drawn strength from a state of permanent transition, which she has always seen as the inexhaustible source of her inspiration. “The numerous relocations, all the travel, and the global adaptability this entailed – all these things strongly influenced me.” states Y’akoto. “Yet I feel no sense of displacement or inner conflict. On the contrary, it is all these stages of a journey, all the impressions and experiences en route, which together, form a sum that is greater than its parts – a greater whole – the sum of me, my totality.” And to be sure, this statement characterizes her career as an artist to date, which has turned out to be just as exhilarating and multifaceted as her eventful personal life.
Music has always defined Y’akoto’s life: her father was a renowned artist of the West African Highlife music genre while Y’akoto herself was given piano lessons at a very early age. At the age of 13, she sang in a band for the first time. With their effervescent fusion of Rock, Reggae, Soul and Funk, they toured the youth clubs and won numerous band competitions. At 16, she made a brief excursion into electronic music in a fit of adolescent whimsy which lasted until she ended up in a line-up involving beat box, guitar, bass and vocals. “The turning point in my music only came when I turned 20” reminisces Y’akoto. This was shortly after successfully graduating as a certified teacher of dance when the solo artist Y’akoto emerged full-blown, which meant, in concrete terms: less experimentation and getting down to basics; no more compulsive innovation for its own sake, but focusing upon the essentials. In short: effectiveness meets avant-garde. “Nowadays the most important thing is to tell stories with my songs. That is why the sound is stripped down to the very basics. Less is more. I took great pains to make sure that in this album, things were kept consistently purist and unadulterated.”

This record, her debut album, ‘Babyblues’ is a splendid collection of songs full of meaning and depth which Y’akoto wrote herself in the course of the past two years in close collaboration with Mocky, Haze and the Kahedi production team (Max Herre, Samon Kawamura and Roberto Di Gioia). “A number of songs on the album such as ‘Good Better Best’ or ‘Moving’ have a very strong Afro feel to them, but for me, they are, above all, folk music, because I want to address people at a very personal level. The songs deal primarily with real life, with the things that happen to each and every one of us every day of our lives; stories that everyone has experienced and can empathize with.” In consequence, Y’akoto’s tracks excel so impressively for reason of a fascinating universal validity which they express with no trace of being clichéd.
With her songs, Y’akoto follows in the footsteps of such luminaries as Billie Holiday, Nina Simone and Erykah Badu as she manages effortlessly to encapsulate grandly intense feeling in exquisite narrative vignettes, moving miniatures in which the concerns of a single individual become the concerns of many. And yet, Y’akoto is simply on a hegira of soul-searching.

At least that is what a spiritually empowered woman in Africa asserted, who Y’akoto consulted - just for fun, actually - in the course her latest sojourn there. The old lady took Y’akoto’s hand, looked deep into her eyes and solemnly declared that Y’akoto had lost her soul. A short, sharp shock. “Then the old lady said that I was in constant search of my soul, which immediately made perfect sense to me” declared Y’akoto, late of Hamburg. “And I then realized that’s why I’ve always refused to say that I perform ‘soul’ music. ‘Soul-searching-music’ would be the better term.”
And indeed, Y’akoto is actually on a hegira of soul-searching.
One thing’s for sure: a voyage of self-discovery like that can hardly be undertaken alone. You need a crew of capable, trustworthy hands to make a musical manifesto out of this soul-searching mission. And Y’akoto found this crew of kindred spirits in Mocky, Haze, as well as in Max Herre, Samon Kawamura und Roberto Di Gioia aka Kahedi. “What I like best about Mocky is his impulsiveness”, enthused the female vocalist about her work with the Canadian now residing in Berlin. “Without wasting words he knew immediately what I wanted. He always managed to bring the right spirit into our studio work and his love of experimentation was perfectly in tune with my approach to music.” Her collaboration with Max Herre turned out to be similarly rewarding. “Things could get tricky and complicated while recording vocal passages where raw, inmost feelings are revealed, but since Max is a vocalist himself, he has a profound understanding of my needs as a singer” states the 23 year-old about the studio sessions and adds: “Everyone involved were, first and foremost, really great musicians. Each an every one of them, a master of his craft. But what amazed me most was the fact that every one of them poured so much work and love into this project. Everything came so harmoniously and naturally, everything felt so right – it didn’t feel like just another job.”

And this feeling of uncompromising consistency is a recurring theme joyously audible through all the songs of the album. Each effortlessly rendered track leads smoothly to the next, the appeal of each individual song seemingly interwoven with that of every other in the album, within the greater context of an encompassing love for music which is the leitmotif.

Take, for instance, the lively and infectious song ‘Moving’, a musical allegory of melancholy mysticism and effusive sensuality. ‘Moving’ is a track which stays with you, imprinting echoes of itself in your mind, a breathtaking, continuous adventure which seems to have neither beginning nor end, with a compelling melody which stems mostly from Y’akoto’s experimental side, from her penchant for non-conformist artistic expression.

This individualistic bent is also strikingly manifest in the choice of track for her first single off the album: then instead of regaling the public with a cheerful effort like ‘Good Better Best’ styled with the help of Haze into a nimbly catchy world music hymn replete with captivating allusions to the music of traditional African dance, Y’akoto chose the moving ‘Tamba’ where she tells of the terrible fate of an African child-soldier. The song is fraught with mordant images which bury themselves into the listener’s mind like a spray of shrapnel, making the frightful lot of the child-soldier a thing to be heard and felt. “Of course, this isn’t a song that conjures a smile on the listener’s face. But it gives him food for thought” offers Y’akoto as explanation for her choice of ‘Tamba’ as first single release. “Music simply doesn’t always have to present a pleasant face. Sometimes music must hurt to make a difference.” That this album will have lasting impact is undeniable.

‘Babyblues’, where Y’akoto reveals her innermost feelings, is testament to the emotional gravity in which she was occasionally immersed in the course of writing her songs. More than anything, her title track ‘Babyblues’ underscores the mystery and darkness inherent in such an otherwise luminous personality as Y’akoto’s, where, accompanied by delicate strains of the piano, she mines the depths of her soul for that black, lightless pulsing core which she then brings to light, transmuted into a glittering prize. “There was actually a time when I felt the blues within me” confesses Y’akoto and laughs. “I got totally absorbed in the blues and that was hard – still, it was fun. A rather silly, childish sentiment came to life at the time – that’s the reason for the title ‘Babyblues’.”

The way in which the 23 year-old adds astounding weight to the meaning of her words with profound emotion; the way in which she combines her youthful vitality with the technical accomplishment of an avowed female vocalist of stature and experience; the way in which her acute flair for creating moving moments of emotion and sensibility emerges from her supreme artistic composure – all this touches the soul, moves the listener; makes a lasting impact.

There is this urge which impels her never to stand still and always to keep growing and learning. This feeling of never arriving yet always being there. The conviction that one must lose oneself first in order to someday, find oneself.
It is restlessness which drives her. 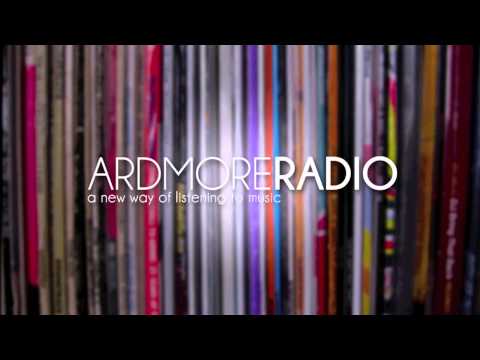 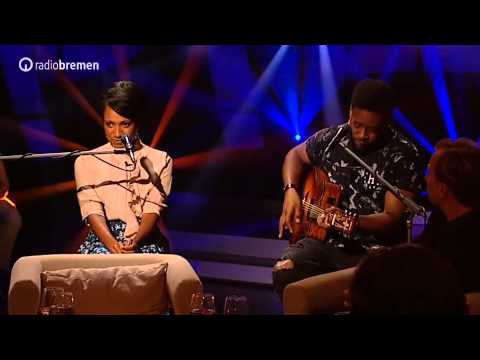