W.C. Clark (born Wesley Curley Clark in Austin, TX, on 16 November 1939) is an American blues musician. He is known as the "Godfather of Austin Blues" for his influence on the Austin, TX, blues scene since the late 1960s. In the late 1960s, he joined the Joe Tex band. After forming several bands with various names, Clark formed the W.C. Clark Blues Revue in 1975. “Modern Texas blues at its best…impeccable, soothing soul and flashy, jumped-up roadhouse blues…heartfelt emotion and sweet as molass...

W.C. Clark (born Wesley Curley Clark in Austin, TX, on 16 November 1939) is an American blues musician. He is known as the "Godfather of Austin Blues" for his influence on the Austin, TX, blues scene since the late 1960s. In the late 1960s, he joined the Joe Tex band. After forming several bands with various names, Clark formed the W.C. Clark Blues Revue in 1975.

“If the blues is played right,” says Austin, Texas native W.C. Clark, “it makes your soul feel clean.” Indeed, master guitarist/vocalist Clark – known as “The Godfather of Austin Blues” – has been playing the blues right and cleansing souls from the east side of Austin to stages around the world for over 40 years. He's been mentoring countless young blues and soul players in the finer points of the music for almost as long. Blues stars from Stevie Ray and Jimmie Vaughan to Angela Strehli to Lou Ann Barton to Marcia Ball have all perfected their craft under Clark's tutelage. Clark's mix of modern Texas blues, searing guitar and heartfelt, Memphis-style soul vocals have made him a favorite of blues and R&B fans alike.

The HOUSTON CHRONICLE said Clark is “one of Austin's most pervasive live performers…he is a powerful and poignant soul man with hard-earned blues wisdom.” The NEW YORK POST calls Clark “a legend of the blues world.”

Before he began releasing albums in 1986, Clark was often referred to in the local press as Austin's Best-Kept Secret. Between the overwhelmingly positive media attention, the popular notoriety, the bigger and better tours, the secret was out. The AUSTIN AMERICAN STATESMAN says its hometown hero is “one of the greatest modern blues performers in the world…blending rock with R&B, soul and a touch of funk.” The AUSTIN CHRONICLE describes his music as “Good rockin’, soul-drenched Austin blues. A potent combination of gritty Texas guitar wedded to devastating, gospel-rich Memphis vocals.” Clark has won several Austin Music Awards for the “Best Blues Band”. Thanks to a series of stellar albums (each accompanied by piles of passionate press) and a reputation as a powerful live performer, the man know as “The Godfather of Austin Blues,” is now among the best loved guitarists and vocalists in the blues world.

Wesley Curley Clark was born into a musical Austin family in 1939. His father played guitar and his grandmother, mother, and sisters all sang gospel in the church choir. “I had so much music in my soul,” Clark recalls, “all I had to do was pick up an instrument and play it.” He learned the guitar as a youngster and at age 16 played his first gig at the Victory Grill, where he was introduced to Texas blues legend T.D. Bell. Soon after, Clark switched to playing bass and joined Bell's band, The Cadillacs. In the early 1960s he began a six-year stint with Blues Boy Hubbard and The Jets at the popular Austin nightclub, Charlie's Playhouse. There he met R&B hitmaker Joe Tex, who recruited W.C. to fill the vacant guitar slot in his group. Clark toured the Southern “chitlin' circuit,” learning music first-hand from Tex and countless soul and blues stars along the way, including Tyrone Davis and James Brown. Along the way, Clark perfected his ability to lift an audience into a soul frenzy. When he returned to Austin, Clark found the musical landscape changing with a whole new crop of young white kids beginning to venture out to the blues clubs to learn how to play. The scene was completely transformed as future stars like the Vaughan brothers, Bill Campbell, Paul Ray, and Angela Strehli came to Austin and discovered the rich musical legacy of bluesmen like W.C. Clark.

In the early 1970s, Clark formed Southern Feeling along with singer Angela Strehli and guitarist/pianist Denny Freeman. He then met and befriended Jimmie Vaughan's firebrand guitarist brother Stevie Ray, who occasionally sat in with the band. After Southern Feeling dissolved, Clark took a day job as a mechanic, but was courted relentlessly by Stevie, who was determined to have W.C. as a member of his own band. Clark eventually quit his job to become the bass player in the Triple Threat Revue with Stevie, keyboardist Mike Kindred, drummer Freddie Pharoah and singer Lou Ann Barton. While playing in this band, Clark and keyboardist Kindred co-wrote Cold Shot, which became one of Vaughan's biggest hits and recently earned W.C. his first platinum record.

Clark left Vaughan in the late 1970s and formed his own band, The W.C. Clark Blues Revue, and self-released his first recording, Something For Everybody, in 1986. The band became stalwarts on the Austin scene throughout the 1980s and early 1990s, playing regular gigs at legendary venues like Antone's and opening for the likes of B.B. King, James Brown, Bobby “Blue” Bland and Albert King. Clark's star – at least locally – was rising.

As his celebrity increased, the critically acclaimed PBS television show Austin City Limits celebrated Clark’s 50th birthday in 1989 brought Clark together in front of a live audience, with his disciples Stevie Ray Vaughan, Jimmie Vaughan, Kim Wilson, Lou Ann Barton, Angela Strehli and Will Sexton all taking part. The broadcast, one of the series' most popular, brought Clark to the attention of a national audience for the first time. In 2000, AUSTIN CITY LIMITS aired an extended jam between W.C. Clark and Stevie Ray Vaughan as part of a Stevie Ray Vaughan special.

In 1994, Clark's friend Kaz Kazanoff introduced him to Hammond Scott of Black Top Records. Impressed by what he heard, Scott released Heart Of Gold that same year. Texas Soul followed in 1996, exciting fans and critics alike. “Honey dripping soul, the toughest of Lone Star Blues,” hailed THE CHICAGO TRIBUNE. With the accolades building and the reach of his music extending, Clark won a coveted W.C. Handy Blues Award for “Soul Blues Album Of The Year” for Texas Soul.

His next release, 1998's Lover's Plea, found Clark singing and playing stronger than ever. Lover's Plea earned him another W.C. Handy Blues Award, this time for Artist Most Deserving of Wider Recognition. Another televised performance, (as part of The Best Of Austin City Limits), hit the airwaves in 1998, setting the stage for a national tour in support of Lover's Plea. Once again, critics and fans went wild. The Chicago Reader called Clark “a veritable superstar.”

On his album, From Austin With Soul, Clark made his Alligator Records debut, he forcefully carried his soul-drenched blues to heights he's previously only hinted at. Clark wrote five of the album's 13 songs (Bitchy Men, Let It Rain, Got To Find A Lover, I'm Gonna Disappear, I Keep Hanging On), and included well-chosen covers from a variety of artists, including Clarence Carter (Snatching It Back), Gatemouth Brown (Midnight Hour Blues), Bobby Bland (Got Me Where You Want Me), Albert King (Get Out Of My Life, Woman), and Johnny Adams (Real Live Livin' Hurtin' Man). Clark's emotional duet with Marcia Ball, on Don't Mess Up A Good Thing, is only one of the album's many musical highlights. Recorded at Arlyn Studios in Austin and produced by Mark “Kaz” Kazanoff, the album features a stellar cast of the city's best musicians, including bassist Larry Fulcher, drummer Frosty Smith, guitarists Derek O'Brien and Pat Boyak, keyboardist Riley Osborne, and Kazanoff himself leading a punchy horn section. BLUES REVUE declared, “With From Austin With Soul, Clark has painted his masterpiece. Few artists rival Clark’s ability to sing as soulfully as Al Green and play guitar with such tasteful precision.” BILLBOARD celebrated the release, calling Clark “Superb. He’s a soulful vocalist and a tasty guitarist with an enormous amount of talent.”

Clark has toured relentlessly for years including performances at the Chicago Blues Festival, European Blues Festivals, Ottawa and Toronto Blues Festivals, various festivals in Europe, Russia and Turkey. Along the way he has met up with old fans and friends and undoubtedly gained new ones everywhere he plays. The rest of the world is now in on what the city of Austin has known for decades: W.C. Clark is an innovative and creative artist whose soulful singing and tasty guitar playing reach out from Austin, with soul, to all corners of the music-loving world.

With his 2011 release, Were You There?, Clark has compiled songs from his live performances that have been requested again and again by his fans. With his non-stop touring, Clark's star continues to rise, as his soulful singing and blistering guitar playing guarantees that his constantly growing fan base will never stop shouting for more. 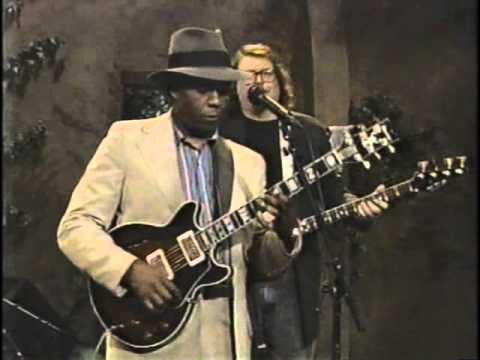