Vomepotro is a brutal Death metal band from Brazil. The Band was founded in Sao Paulo/Brazil in the second semester of 1996. Suffering influence of the most powerful death metal Bands of its time, the Band started playing covers from other Bands such as Slayer, Morbid Angel, Cannibal Corpse and Deicide, and right after, Vomepotro begins to compose its own songs, which are based on heavy and fast techniques. Vomepotro's members enjoy scare movies and splatter band’s lyrics and such profile led...

Vomepotro is a brutal Death metal band from Brazil.

The Band was founded in Sao Paulo/Brazil in the second semester of 1996. Suffering influence of the most powerful death metal Bands of its time, the Band started playing covers from other Bands such as Slayer, Morbid Angel, Cannibal Corpse and Deicide, and right after, Vomepotro begins to compose its own songs, which are based on heavy and fast techniques.

Vomepotro's members enjoy scare movies and splatter band’s lyrics and such profile led them to take this lyric theme and also inspired the Band to write songs about real and imaginary facts that report the most nasty horror stories and the most brutal ways of death.

In the end of 1996, after some shows, they recorded their first demo-training “Pressed Corpse”, that despite of the low audio quality, it has deeply congratulated due to the lyrics message. In 1997, Vomepotro goes on with its shows, spreading its work and contacting zines and other bands all over Brazil.

At the beginning of 1998, the vocal Joao Paulo leaves the Band which made the guys to postpone their firs official demo-tape. A couple of months later, the singer Leandro Silva joins the band and after some practicing’s, Vomepotro recores its second non-official demo untitled "The Putrid Odor" that , despite of have been just a recorded band training, it has became a classical tape on the extreme underground, with several favorable reviews, even though, we are talking about an amateur production.

The Band has been invited to join some underground festivals, and has played with respectable Brazilian bands. In the end of 1999, the Band recorded "Necrodemented", which is in fact, the first official production of the Band, directed by Tchelo Martins, who also produced Krisiun, Abhorrence, Funeratus and other known Brazilian death metal’s bands. After its launching, "Necrodemented" was deeply noticed in the most important magazines and specialized zines that opened the doors for new shows and finally, the Band was invited to open the second edition of “Avalanche Metal Fest”.

In the end of 2001, tired of some bad music quality shows and lack of support of show managers, the vocalist (Leandro), and the guitarist (Ricardo) leave the Band. Due to this reason, the drummer (Andre Martuchi) and the bass player (Mauro Santiango) stop the bands practicing, although, they kept searching for gifty musicians to go on with their goals.

In 2003 Cristiano Martinez (vocal and guitar) and Kleber Martinez (lead guitar) join Vomepotro, fitting as a glove in the Band’s profile. So, the Band comes back to its practicing and songs rearrangement for two guitars and also composing new songs with a heavier and violent style, but preserving however, their roots.

After so much dedication, the Band records its demo CD "List of the Dead", produced by the Band. This second official production is launched in 2004, with very good reviews from the Brazilian and European metal underground market.

In 2005, Vomepotro goes for its first CD "Zombie Gore Vomit", forecasted to be launched in 2006 by the Germany record company "Obscure Domain". Vomepotro now celebrates its 10th year’s anniversary dedicated to the extreme music, and the Band is very proud of getting its goals, and keeps on the road for the real and brutal death metal.

After their CD came out "Zombie Gore Vomit" has been getting lots of compliments from magazines, zines and webzines from Europe and North America.

One year later they started the composition of the new songs to the next Vomepotro's album but promoting their first full-lenght in Brazil with some shows around the country.

In June of 2008, the band had returned at the studio to record the new album intitled "Liturgy of Dissection", however, Sevared rec. Came in contact to offers an deal to release it besides good promotion and distribution, immediately Vomepotro signed with this great american label and "Jon Zig" is the chosen to design the cover art of "Liturgy of Dissection" combinating all your insanity with this sick stuff!!!

By December from this same year the new cd is finally ready, your production is much better than "Zombie Gore Vomit" because everything sounds more heavy, intense as well as the musics has more passages, tempo changes and of course blating beats!!!

It's the most important cd from Vomepotro after all these years in the underground, it defines what "means" the band name and your new steps into the brutal death metal scene. Read more on Last.fm. User-contributed text is available under the Creative Commons By-SA License; additional terms may apply. 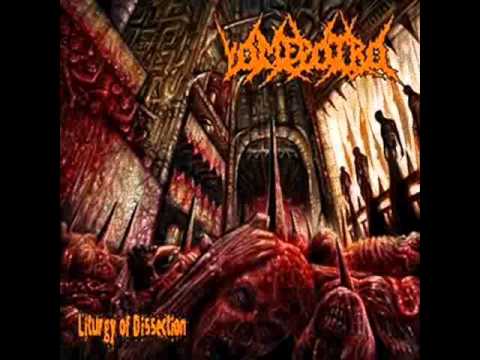