Swing is the musical manifestation of forward motion. To achieve one’s goals, one must take giant steps. Today’s modern musicians at the change of the 21st century are moving miles ahead, advancing the jazz continuum, while remaining open and engaged in other musical inventions and dimensions. The astonishingly gifted, Colorado-born, alto / soprano saxophonist / flautist Tia Fuller is such an artist. She is at home at all points of the musicverse – from her show-stopping solos as a member of sup...

Swing is the musical manifestation of forward motion. To achieve one’s goals, one must take giant steps. Today’s modern musicians at the change of the 21st century are moving miles ahead, advancing the jazz continuum, while remaining open and engaged in other musical inventions and dimensions. The astonishingly gifted, Colorado-born, alto / soprano saxophonist / flautist Tia Fuller is such an artist. She is at home at all points of the musicverse – from her show-stopping solos as a member of superstar Beyoncé’s all-female band, to her scintillatingly swinging jazz dates and recordings. Her newest Mack Avenue release Decisive Steps, is the long-awaited follow-up to her 2007 label debut Healing Space. It features her Beyoncé bandmate, drummer Kim Thompson; bassist Miriam Sullivan; Fuller’s sister, Shamie Royston on piano and Fender Rhodes; with special guests, trumpeter Sean Jones and bassist Christian McBride (both Mack Avenue label mates); vibraphonist Warren Wolf; and tap dancer Maurice Chestnut.

“It’s a continuation of Healing Space, evolving from a stationary place of healing to steps of action,” Fuller says. “I’ve been in the mindset of really moving forward to the next level in my life, constantly being in the mindset of greatness, relentless in my pursuit and progressing with purpose by embracing my talents, recognizing my strengths and improving upon my weaknesses…but also in not being afraid of change; stepping forward in faith and not in fear.”

Indeed, the ten tracks on this sumptuous CD aurally illustrate Fuller’s artistic fearlessness fulfilled by her agile, buoyant and elegant full-bodied sax lines effortlessly improvising a number of moods and grooves, as evidenced by the take-no-prisoners tempo of the title track. “The first track, ‘Decisive Steps,’ was one of the last songs that I wrote for the album,” Fuller says. “This particular song is very intricate – it has a lot of hits and time changes, so, compositionally, I wanted to portray a sonic representation of momentum; in moving forward, and really feature everybody in the quartet.” Royston’s Icarusian “Windsoar” highlights she and her sister’s telepathic compositional bond. “We have a way of writing, where our songs are almost seamless,” Fuller says. “It’s funny; when Shamie started writing ‘Windsoar,’ it begins with a melody surrounded by a concert B-flat, and I was like, ‘Shamie…I just started writing ‘Clear Mind’ with the same concept of the harmonies surrounding the melody of the B-flat.’ We were writing in the same light of each other. We didn’t talk about it; it was intuitive.”

That intuitive simpatico comes through loud and clear on the funky “Ebb & Flow,” which features McBride and Sullivan. “The concept of the song was inspired by one of my Spelman [College] sisters reunion,” Fuller says. “In preparing for my recording and taking those aggressive steps, you have to be one with the spirit – allowing the ebb and flow of the physical and spiritual to become one.” “Shades of McBride” is Fuller’s finessed take on McBride’s “Shade of the Cedar Tree.” “My melody is an expansion of his melody, over different chord changes. After a week of singing my melody over his tune, I knew it was complete,” Fuller says. “He’s been a mentor of mine and a great friend.”

The interlude “Steppin’,” featuring tap dancer Maurice Chestnut, takes Fuller’s thematic concept to a new level. “Prior to the recording I had the opportunity to meet Maurice Chestnut…we did some gigs together with the T.S. Monk Septet. I was like ‘man, I’d really like to feature him – tying it along with the concept of decisive steps…to audibly represent stepping.’ I was thinking what better way to do that, than with a tap dancer. Musically, it’s an interlude to represent moving forward and serves as a transition within the sequence of the album.”

The Latinesque “Kissed by the Sun” was “inspired by a melody I that was in my head as I awoke, the sun hitting my face...it felt like a kiss.” Likewise, the waltz-like “Night Glow,” penned by Shamie Royston’s husband [Rudy Royston], is equally impressive. The album also contains Fuller’s ingenious reworking of two well-worn standards. “On ‘I Can’t Get Started’ I wanted to feature the amazing artistry of Christian McBride and Warren Wolf,” Fuller shares. “I wanted to experience the purity of the bass, sax and vibe combination, absent of drums. This arrangement expands the timbre of the album and recording with Christian is a dream come true – this trio combination is timeless. On ‘My Shining Hour’ I wanted something we could ‘burn-out’ on, but also something that grabs the listener’s attention. This arrangement gives us the harmonic freedom…simple, yet complex bass-line over the classic melody is the ultimate balance of the familiar meeting the unfamiliar…closing the album with the excitement of the quartet.”

The bonus track, “Life Brings,” a percussive, “syncopated spiritual” featuring Chestnut and vocalist Asaph Womack, will be available digitally. “It’s a blueprint of what I want to do in the future: an orchestral piece, with a full choir, video and tap dancers – a large production.”

On Decisive Steps, Fuller’s sound is soaring, supple and in-the-pocket from years of channeling her horn heroes. “The first solo I transcribed was Cannonball Adderley’s ‘Stars Fell on Alabama’ my freshman year at Spelman,” Fuller says. “I’ve always had a deep love for Cannonball. I always find myself going back to him. He has everything in his playing: soul, technique, his sound is amazing. Also John Coltrane; he’s another person that I checked out early on. I actually heard him before I started playing the saxophone because my parents are musicians. My Dad played Giant Steps throughout the house when I was eight, nine, or ten [laughs]. Recently, I’ve really been checking out Earl Bostic. With the Beyoncé gig, I have a solo where I am playing a twelve bar G blues intro [the cadenza before “Work It Out” while Beyoncé is talking] and I thought, let me check out Earl Bostic, Trane did. More importantly, he was one of the saxophone legends that mastered the art of playing in the R&B world, the pop world and the jazz world…ultimately speaking the language and dialect of each genre.”

Fuller made the eventual move to New York, relocating to nearby Jersey City, arriving two days before September 11, 2001. Undaunted by the terrible times of that period, she forged ahead and played and recorded with some of jazz’s brightest stars, including the Duke Ellington Big Band, Nancy Wilson, T.S. Monk, Don Byron, Brad Leali, Wycliff Gordan, Mickey Roker, Ralph Petersen, Jon Faddis, Rufus Reid, Jimmy Heath, Gerald Wilson, Sean Jones, Charlie Persip, and Don Braden. Then, on June 17, 2006 she was hired by Beyoncé and, as they say, the rest is history. “Playing with her is truly amazing,” Fuller says. “I’ve really learned a lot about maintaining your integrity, and also how as an artist, you have to be the facilitator…surrounding yourself with a great team that shares and helps to facilitate your vision. Also, learning to engage and entertain your audience, as well as being consistent. There’s something to it, playing the same show every night, almost verbatim. And every night, that consistency is able to grab and keep sixteen and seventeen thousand people a night; and for them, to have the most amazing experience. So it’s really empowering – not only to be performing with her, and to see how high of a work ethic she has, but to also be in a band of all women that are ALL creative and musical legends, in their own right. The ten of us musically enhance each other. Each of us contribute a different piece of the puzzle, something completely different; yet equally important to Beyoncé’s band.”

Along with her high-profile gig with Beyoncé, Fuller has also emerged as a solo recording artist. In 2005 she released her first CD as a leader (produced by mother, Elthopia Fuller), Pillar of Strength (Wambui), which was praised by Terrell Holmes of All About Jazz for being "an exhilarating work that introduced her as a leader who strives for perfection," followed by her Mack Avenue debut, Healing Space in 2007.
Her teaching credentials are equally expansive and impressive. She has conducted numerous clinics and master classes at the middle, high school, and college levels, including: Jazz Institute of New Jersey, Aurora Public Schools, Mile High Jazz Camp, University of Colorado at Boulder, Miami-Dade Community College, Jazz Institute of New Jersey, Stanford Jazz Workshop, Drexel University, Montclair State University, Bloomfield College, and New Mexico State University.
Which brings us to Decisive Steps: Tia Fuller’s latest sonic testament to her ever upward-and-evolving evolution toward artistic perfection; an evolution that is taking place in an intricately intertwined musical world where an artist combines a myriad of genres. “The Beyoncé gig has helped me to really appreciate the artistry and freedom that we have in jazz,” Fuller says. “Playing in jazz settings helps me to appreciate and integrate what we’re doing with Beyoncé. They balance each other out. And I’m learning that they’re both the same. Playing in front of sixteen thousand people, or sixty people, it’s the same, because it’s all about people, transferring energy, uplifting and encouraging spirits and sharing the love of music. There’s a common thread between the two, and they enhance each other. I think musicians are taking a step forward on both sides; we’re moving forward with combining all forms, and more people are accepting that concept, because it’s all inter-connected. We, as a people, are taking Decisive Steps!” 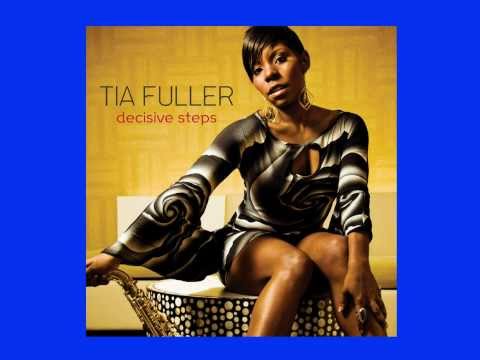