There have been at least three artists named The Termites:

1. The Termites were a Jamaican rocksteady duo consisting of Wentworth Vernal and Lloyd Parks. Their career was a rather short one, although they did manage a big hit in "Have Mercy Mr. Percy" in the late '60s and tracked enough for a single album, Do the Rock Steady, while working almost exclusively with producer Coxsone Dodd at Studio One. Vernal eventually retired from the Jamaican music business, but Lloyd Parks went on to a long and respected career as both a bass player and singer, in time forming his own band, We the People. We the People is probably best known for backing Dennis Brown and numerous other reggae singers on international tours.

2. The Termites are a psychobilly 5-piece from Scotland. The band formed during bleak mid 1980's Kilmarnock - A town that was, at the time, rich in psychobilly fervor, with great bands such as The Longhorns - indeed, it was with this band that the Termites first started out, supporting The Longhorns in Kilmarnock's smoke and aggression filled clubs. The band were playing sellout gigs within a matter of months. Initially, a four piece of Kenny Mitchell (vocals), Scott Ballantyne (guitar), Ewin Murray (drums) and Gerry Doyle (electric bass), the band were gaining the attention of the music industry for their powerful, and usually violent, live shows.

All four members of the band were brought up around the 'Tap Shoaps' (Top Shops) of Kilmarnock housing scheme, New Farm Loch, and, as a result, were as much a gang as a band. This could be seen in the relationship between the members, a relationship that would almost kill off the band from the start.
The Termites, Live in Dordecht, Netherlands 2006
The bands recording career began in 1987 with the release of "Devil Call" on Fury Records compilation "Gypsy Girl". Closely followed by the 4 track EP on Raucous Records in 1988. After kicking up a storm with live performances up and down the UK and Europe the first album "Overload" came out in 1989 on Link Records. Various other tracks have appeared on many different compilation albums around the world. The Overload album was recorded in Bracknell, England, with the legendary Chuck Flintstone behind the mixing desk. The album sessions were fraught with arguments and fist fights, but the album did see the light of day, released on the ‘Chuck Flintstone Presents’ series on Link, it became an instant classic. It was the bands internal fighting, the fuel that propelled the band, that was to ultimately be their downfall. No sooner had the Overload album been released, the band members were leaving. The lineup changed throughout the late 1980's to the early 1990's however the dynamism of the band had gone, leaving singer Kenny Mitchell, the sole original member. The Termites were no more.

1991 saw the last gig in Irvine's Attic nightclub. Billed as a warm-up gig for an imminent gig at London's Leicester Square, this was ultimately to be the last. Ewin (drummer) was to leave the band within days, signaling the end the Termites dream however an awakening for others. An 18 year old punk at the time remembers the night well, "I remember getting on a bus at Kilmarnock's Kay Park Tavern, hired to shuffle the entire pub to Irvine for the gig - such was the popularity of the band. I was amongst the audience and was blown away by the energy of the band. I was also covered in blood from an injured skinhead at the front of the crowd. From that day onwards, I knew I wanted to be a musician". The band may have split however that 18 year old, also initially raised in the same area of New Farm Loch, Kilmarnock, would go on to learn to play the fiddle and would ultimately become the fifth member of the Termites in years to come.

The mid 1990's, through to 2000 saw all members of the band go their separate ways. The turn of the century saw a reappearance of the Termites for a few one-off shows however this was not the original lineup and the spark wasn't there. Ironically, it was vocalist Kenny Mitchell's relocation to Boston, USA for several years that ensured that the band that he fought so well to keep together would not rise from the ashes. Kenny was to go on to become one of Scotland's most respected tattoo artists and currently runs a successful tattoo parlour in Glasgow, Land Ahoy Tatto Parlour.

By late 2005, original members Kenny Mitchell and Scott Ballantyne had decided to bring the Termites back. Original drummer, Ewin Murray, also agreed and so the original three were back for the first time in 15 years.
This time, Matt Black, bass player from Kenny's previous band, "The Hateville Heroes", joined as upright bass player. The band started touring again. 2006 also saw the re-release of the Overload album, further increasing demand for the band. During the summer of 2006, an additional member of the band was recruited to bring a fiddle to two new tracks, "Somebody's Gonna Pay", and "Bubblegum". Fiddler, Jonny Fiddles was found living three houses away from Kenny Mitchell. Since then, Jonny has remained in the band, now appearing in many of the new tracks.
The band signed to German record label "Crazy Love Records" in January of 2007, with a new album, provisionally entitled, "Square Go" and is expected to be released in the first quarter of 2008.

3. The Termites were a 1960s female beat group. Read more on Last.fm. User-contributed text is available under the Creative Commons By-SA License; additional terms may apply. 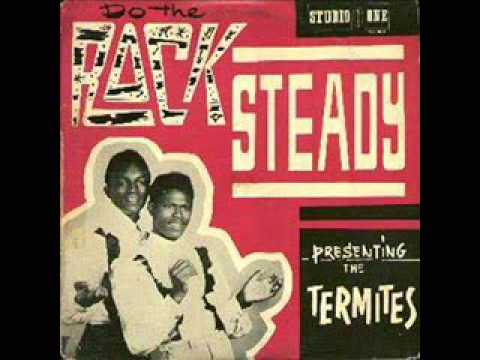