2 bands: 1) Formed in Los Angeles in 1983 by Spencer Eldridge, Larry Fortunato, Kevin Grover, Jacques Olivier and Eddy Sill, The Mutts became an influential garage rock group during LA's post-punk period and played on bills with many popular acts of the era, including The Go-Go's, The Bangles, Adam Ant, The Dickies, The Minutemen, X, Fishbone and many others. Fishbone debuted as an opening act for the band at Madame Wong's in LA's Chinatown. The group released two EPs on local independent label...

1) Formed in Los Angeles in 1983 by Spencer Eldridge, Larry Fortunato, Kevin Grover, Jacques Olivier and Eddy Sill, The Mutts became an influential garage rock group during LA's post-punk period and played on bills with many popular acts of the era, including The Go-Go's, The Bangles, Adam Ant, The Dickies, The Minutemen, X, Fishbone and many others. Fishbone debuted as an opening act for the band at Madame Wong's in LA's Chinatown. The group released two EPs on local independent labels, "Fire Hydrant" on Music Rage Records in 1984 and "The Mutts" on Shanghai Records in 1985, but the combo wouldn't come into its own until Grover and Sill took over as frontmen after singer Eldridge and guitarist Olivier left the group in 1986.

Musically reminiscent of artists like The Faces and The Replacements, the jangle 'n' crash Mutts were billed as "Drunk and In Concert" and headlined Saturday night shows on the Sunset Strip for nearly a decade with the addition of a new guitar player, Billy Murrell (aka Stinko the Clown), and numerous drummers, including Paul Legaspi and Robbie Rist. Michael Bernheim and Victor Junger, two hall of famers from Burbank's hell-raising hotrod gang, teamed with the group in the 1980s to assist with public relations and road management tasks. Bernheim (aka the Party Fascist), functioned as a sixth member of the combo by providing tireless business support and zany antics, which eclipsed the dysfunction of the band's members combined. Perhaps more notable than the band itself, the group's practice haven on the corner of Sunset Boulevard and Wilton Place, lovingly called Stinko's Ranch, was used to host after-hours parties with free beer after the group's shows, and the parties became a popular stomping ground for celebrities before and after stints in rehab. If the Mutts played to a house of 200, it was an easy bet that 400 would converge on Stinko's Ranch for loud music, nudity and beer that never ran out.

Many members of the local press corps were seen, heard & drank at the Mutts' parties, though to this day many forget to remember. From time to time, many bands tried to impersonate the tactics of The Mutts, but the music business in general was ultimately no match for the band's famous pants-dropping attorney, publishing sidekick and the bands duo of melodic, power-popish song writing talent. In what is best described as a terrifying ballet of sheer stupor, the Mutts whirled in bum suits without caution to the edges of staging in stop-and-go sets, which were often interrupted by food fights, on-stage pizza deliveries and the kind of pandemonium that occurs when fast friends disagree behind liquor stores. If all went well, the crowd was treated to a slamming Sex Pistols cover while fans performed impromptu bathroom remodeling jobs and wolfed mouthfuls of mints in hopes of making it to Stinko's Ranch alive and un-handcuffed.

The band received widespread notoriety when their only major release, "Stinko's Ranch" Loud/WEA, debuted in late 1992. The album received an A in Entertainment Weekly, and the single, Emilyn, became a top-5 hit on P-1 (million+) radio markets in North America. The group appeared on the cover of BAM Magazine, and the late Eric Douglas played the bartender in the video for "I Live With a Cat." The owner of the WEA-distributed record label, Rick Laudati (Loud), mysteriously vanished into thin air the day after the album was released, and this threw the album into a hopeless legal debacle, which wouldn't be resolved until 1994. The band continued to play in Los Angeles until their famed rehearsal hall and party house was leveled to accommodate a Home Depot in 1996. Singer and bassist Sill fronts a new Los Angeles-based group, The Popravinas; singer Eldridge enjoys a career as a painter and performs with his NYC-based group, The Contraptions. Grover writes and records music as Kevin Michael.

2) The Mutts were a rock and roll band from Brighton, England.

The sound created by The Mutts was in part derived from the Detroit bands of the late sixties and in part from British rock. The band was mainly a live phenomena. Releases by the band include the 7" Missing My Devil (2003), an eponymous EP (2004), and albums Life in Dirt (2005) and I, Us, We, You (2006) all released by Fat Cat Records.

The band toured with Detroit garage rock artists The Dirtbombs. The band played at the Glastonbury Festival in 2005 and completed one tour of America culminating in a performance at the Texas SXSW Festival before folding in September 2006 Read more on Last.fm. User-contributed text is available under the Creative Commons By-SA License; additional terms may apply. 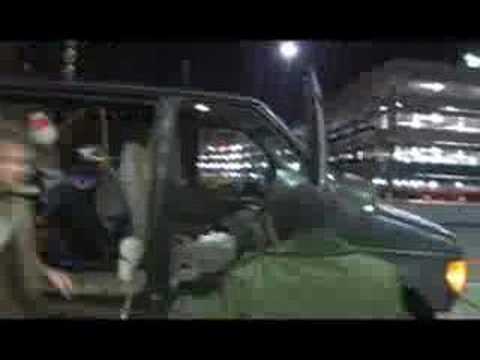