Ryan Perry (18) -- vocals, guitars,Kyle Perry (16) -- bass,Taya Perry (12) – drums “These young kids have got energy, talent and do the blues proud with their own flavor. I believe they’ve got a GREAT future ahead.” – B.B. King See Also Homemade Jamz Blues Band: http://www.last.fm/music/+noredirect/Homemade+Jamz+Blues+Band How does a seven-year-old kid get the blues? Ryan Perry, now 16, laughs heartily at the notion—like he’s a father himself, maybe even a grandfather, as if fondly recallin...

Ryan Perry (18) -- vocals, guitars,Kyle Perry (16) -- bass,Taya Perry (12) – drums
“These young kids have got energy, talent and do the blues proud with their own flavor. I believe they’ve got a GREAT future ahead.” – B.B. King
See Also Homemade Jamz Blues Band:
http://www.last.fm/music/+noredirect/Homemade+Jamz+Blues+Band
How does a seven-year-old kid get the blues? Ryan Perry, now 16, laughs heartily at the notion—like he’s a father himself, maybe even a grandfather, as if fondly recalling his precocious past self. “We haven’t had any bad xperiences as a family,” says Perry, who sings and plays guitar in the Homemade Jamz Blues Band (HJBB) with his brother Kyle (14, bass) and sister Taya (10, drums). He understands the irony of a world-weary anklebiter but more importantly the simple, youthful concept of doing what comes naturally.

HJBB started in Baumholder, Germany when father Renaud Perry returned from military service in Korea. Young Ryan found a Stratocaster copy among dad’s bags and wanted it. A week later, Ryan had composed a short instrumental tune (which he’d play at his school talent show) and was playing along to commercials. When the family relocated to Tupelo, the passion stayed with him. Returning home, Ryan, now 11, dove head first into the blues.

“I heard B.B. King, Albert King and Stevie Ray Vaughan,” he recalls, “and I would listen to them all the time and try to emulate them.” Having found his muse, Ryan’s playing progressed “like, tenfold. As soon as I knew which direction to go, it really took off.”

Two years later, Ryan was playing live with a drum machine and little brother Kyle, then nine years old, wanted in on the action. After first trying piano and becoming frustrated that he didn’t progress as fast as Ryan, Kyle switched to bass, teaching himself the nuances of the instrument and its role in the blues. Soon he was playing out with his brother, as confident as any wizened old pro and digging his role. “ keep the timing and lock down the beat along with the drummer, which allows the lead guitar player to do his own thing while everyone is juking to the beat.”

Eventually proud papa Renaud called Robert Stolle of Clarksdale’s storied Ground Zero Blues Club and insisted on an audition, HJBB—Ryan, Kyle and an unrelated drummer wowed Stolle enough to get a booking. When that drummer didn’t work out, seven-year-old Taya wanted to give it a shot. Already possessing a rhythmic sense from playing tambourine, Taya settled onto the stool and in two months was providing the beat behind Ryan and Kyle. “It's very exciting to play drums,” she says.

It’s likewise energizing to watch HJBB work out, and soon the cherubic trio was a hot ticket. Ryan’s gruff vocals and visceral, stinging, guitar licks, Kyle’s solid rumble and Taya’s cool stomp have electrified crowds across the country, up and down Memphis’s famed Beale Street and on the festival and blues cruise circuit. The band saturated their local media, appearing numerous times in several local papers and national blues magazines, and on local and national TV—including a feature segment on CBS Sunday Morning when the band played the WC Handy Festival last July. Even B.B. King said in a YouTube video, “In my 82 years, I’ve never seen something musically… so remarkable.”

As well, HJBB won the 3rd Annual MS Delta Blues Society of Indianola’s Blues Challenge (2006), and were the youngest band ever to compete in the International Blues Challenge (2007), taking 2nd in a field of 157 bands. Fred Litwin, president of the esteemed label NorthernBlues Music, was a judge for the event. Fred called HJBB and announced he was keen to make them the youngest blues band to sign with a major record label. “Mister Fred,” as the Perrys call him, made it happen. True to their name, the band recorded Pay Me No Mind at home, over three days in January 2008.

Rife with powerful, puissant songs (lyrics by Renaud, music by HJBB) that lyrically and musically epitomize the blues, Pay Me No Mind blends Chicago and Mississippi juke joint blues, copping the gritty slickness of the former and the dirty soul of the latter—never betraying its authors’ age. The trio exudes nothing but confidence and attitude as they sing of betrayal, love, hard times and other bad things gone down as if they’ve lived a life rich in strife. They are, to be sure, a veritable blues explosion poised to make the big sound.

Which again begs the question: how do a seven-year-old and his younger siblings get the blues? Ryan says they just “connect” with the music, like it’s hard-wired into them. He and his siblings don’t think in those terms. “We all love the blues,” he says matter-of-factly. “For some reason it just comes naturally to us.”
See Also Homemade Jamz Blues Band:
http://www.last.fm/music/+noredirect/Homemade+Jamz+Blues+Band 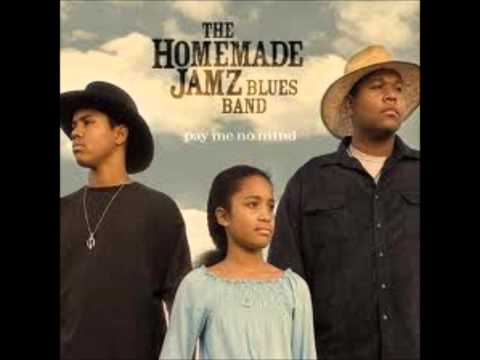 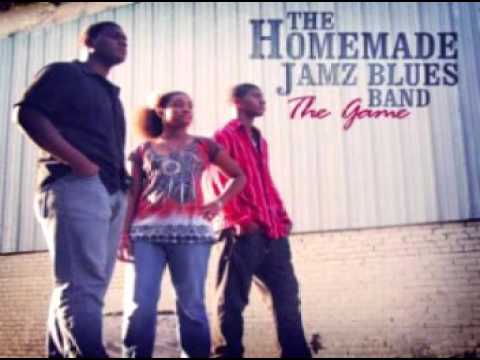 Burned Down the House 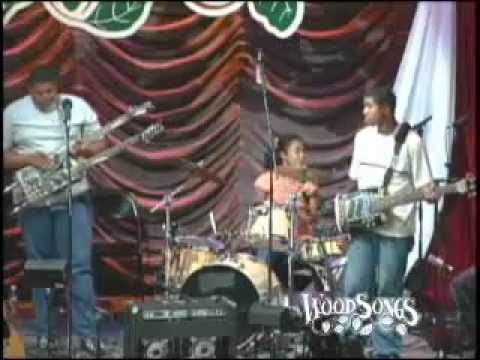 Pay Me No Mind 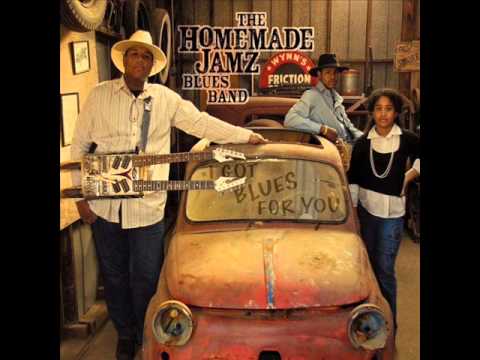 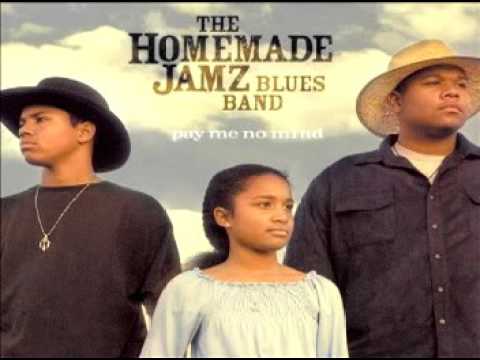