Josh Malerman, the voice of the High Strung, likes to say it's because the band has been best friends since they were eleven that they were able to live in a bus together for 300 shows a year, five years running. But he also says it's the songs... and the way Derek Berk (drums) and Chad Stocker (bass) play them... that gets them to love the experience as much now as when they were, well, eleven. The High Strung are a curious band. Extremely hard workers (Malerman once hung up on a potential man...

Josh Malerman, the voice of the High Strung, likes to say it's because the band has been best friends since they were eleven that they were able to live in a bus together for 300 shows a year, five years running. But he also says it's the songs... and the way Derek Berk (drums) and Chad Stocker (bass) play them... that gets them to love the experience as much now as when they were, well, eleven.

The High Strung are a curious band. Extremely hard workers (Malerman once hung up on a potential manager who said a band wasn't good just because they work hard), they are often mistaken as something much more simple than they are. The High Strung are not a traditional rock and roll band. The High Strung don't have a bluesy bone in their body (though they sometimes long for one). And because of a vigorous tour schedule that wasn't planned but continued to feed off itself nonetheless, the High Strung do not belong to any one scene or "movement". They can't sit still! It is hard to say exactly who the band sounds like (the words "quirky" and "autonomous" are ascribed them often) and it's maybe more telling to explain them in unusual musical terms.

Maybe the High Strung have the SPIRIT of The Flaming Lips. Guided By Voices. Bands who produce seemingly impossible numbers (1200 shows, 400 songs) and who's audience exists more from word of mouth than by being in the right place and the right time.

Maybe the High Strung have the SPIRIT of the Merry Pranksters. Leaving their tour bus at the front door of the Rock N' Roll Hall Of Fame (with a plaque, making it look like a real exhibit) suggests they do.

Maybe the High Strung have the SPIRIT of Lewis Carrol. Malerman's lyrics, one of the most striking features of the band, usually describe characters more likely found in the pages of an eerie children's book than those who so often adorn the rock n' roll cannon. A young girl who builds the world's biggest "something" in "Seems It's One Thing". A museum curator who's envy of the paintings he protects drives him to some very mischievous deeds in "The Curator". A workaholic who is mooched off in different ways for each stage of his life in "A Real Meal Ticket" (it's maybe worth noting that Bob Pollard called MOXIE BRAVO, the band's second record, and the one that includes many of these characters, a "masterpiece").

Or maybe the High Strung have the SPIRIT they had when they fell in love with rock n' roll in the first place. As kids. As teens who once heard The Zombies and Brian Eno and The Ramones and decided to make some noise of their own.

There are other things, too, other properties that make the High Strung difficult to zero in on. Harder to describe than most. Chad Stocker, whom Malerman insists is the world's defacto bass player, is the band's lead guitarist. Derek Berk, sitting behind huge vistalite drums, is the band's MC, so to speak, informing the crowd, very nearly doing stand-up, and describing the songs, using whatever description he heard Malerman say in the bus. And Malerman writes horror novels too... something irreconcilable to some after hearing him sing twenty pop songs, but something that he insists is a "linear connection."

NPR's This American Life did a feature on the band for a tour of public libraries they did this past summer. How does one explain that exactly? A band who doesn't play anything close to kids' music, playing libraries at three in the afternoon or seven at night... standing on their amps... answering questions about girlfriends and volume and beer?

The press has been kind to the High Strung. Their Rolling Stone feature was bigger than Jewel’s on the same page. They had a full page in Entertainment Weekly. And the Washington Post named "The Songbird" the second best song to come out that year. NPR has done three separate features on the band. Playboy, Spin, MTV2. Stuff Magazine named "Never Saw It As Union", the lead-off track for Moxie Bravo, as the song to download that issue... ahead of Kanye West's enormous hit Goldigger.

The band has finished their third album, Get The Guests, their most electrifying and unique work to date. Produced by dynamo Jim Diamond, the band admits that the best compliment they've received from the early listeners is that " Get The Guests is so unique, it would be impossible to say it sounds like this or that band, but instead should be looked at as what other bands may sound like in the near future."

The High Strung are a band to root for. A band you can get behind. And the landscape (mountains, we'll say) created by a rhythm section who do not quit, and the bird-like voice that echoes off those mountains, makes for a hell of a back-drop for characters who do not fit exactly into the traditional rock n' roll landscape.

Both the characters sung about and the ones doing the singing too.

(from thehighstrung.com and it's all true!) Read more on Last.fm. User-contributed text is available under the Creative Commons By-SA License; additional terms may apply. 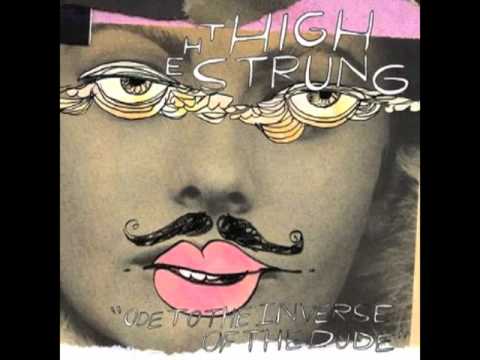 Standing At The Door Of Self-Discovery