The Golden Horde (1982–1994) were a rock, punk, neo-psychedelic, pop band based in Dublin, Ireland. The most renowned line-up of the band was: Sam Steiger, John Connor, Peter O'Kennedy, Des O' Byrne & Simon Carmody, although at their very first live performance, there were 13 band members on stage. The group disbanded in spring 1994, members going their separate ways, to pursue a variety of personal projects. Even though the band experienced some commercial success, that has always been oversha...

The Golden Horde (1982–1994) were a rock, punk, neo-psychedelic, pop band based in Dublin, Ireland. The most renowned line-up of the band was: Sam Steiger, John Connor, Peter O'Kennedy, Des O' Byrne & Simon Carmody, although at their very first live performance, there were 13 band members on stage. The group disbanded in spring 1994, members going their separate ways, to pursue a variety of personal projects.

Even though the band experienced some commercial success, that has always been overshadowed by a cult underground following they retain to the present (see "SoundCloud", YouTube, "BandCamp", Facebook). More significant, has been their influence on a variety of alternative musical acts, which continues to propagate further with the digitization of rare, unreleased or live recordings and performances.

Their own music was inspired by punk rock bands such as The Ramones, Johnny Thunders, The Damned and The Cramps. 1960s Psychedelia, Soul and Garage Rock. The Stooges, The Velvet Underground and UK/US early 1970s Glam rock. As well as rock artists such as The Faces, Big Star, Slade, Badfinger and the Rolling Stones.

links[edit]
The Golden Horde - blog
The Golden Horde – on YouTube
The Golden Horde – on SoundCloud
The Golden Horde – on BandCamp
The Golden Horde – on Facebook
101 Irish Records You Must Hear Before You Die – 2012
The Golden Horde – on LastFM' '
unofficial fan site's comprehensive history/discography of the band
The first recording, the EP-single: Dig That Crazy Grave, was released in 1983, and featured the tracks: 'Brainiac', 'Dig', 'The Curse' and 'Vampire Bat'. The first EP-album, The Chocolate Biscuit Conspiracy! (I.D. Records), followed in 1984, and featured spoken-word contributions from futurist and satirist Robert Anton Wilson. Tracks on this album included: 'The Chocolate Biscuit', 'Young and Happy', 'Communist for the FBI', 'Little UFO', 'Black Flag' and 'Lawrence Talbot Suite', bonus tracks on some formats included: 'We Know What's Good For You' and 'Fiona'. Des O' Byrne scored the music for the premiere performance of Wilson's "Wilhelm Reich in Hell" play, which debuted at the Edmund Burke Hall in Trinity College, Dublin. Robert Anton Wilson later went on to include 'The Golden Horde' (as a fictitious rock group performing at a music festival) in a later Illuminatus! ('Cosmic Trigger') book series. From this album, a sheir single, "Young & Happy", was chosen as the theme song for the "EuroSurf '85" championships.

The second EP-album ...in Reality, recorded throughout 1985, was released on MediaBurn (distributed by Rough Trade/Cartel) in 1986. This collection featured the tracks: 'Crash Pad Chick', 'I Knew Sky', 'Name in the Bullet', 'Brainiac', 'Vampire Bat', 'The Curse', and the bonus track on some formats 'Adrienne'. Donald Murray bass guitarist since 1982, departed late 1985. His successor, John Connor, along with a second guitarist, Sam Steiger, augmented what was to become the most acclaimed line-up of The Golden Horde 1985–1994. During this period the band played with acts as varied as The Fall, The Prisoners, The Ramones, The Pogues, The Damned, The Mighty Caesars, Johnny Thunders and The Nomads amongst others.

Numerous BBC and RTÉ Radio Sessions were completed between 1985–1993, featuring Golden Horde originals as well as their own often eclectic choice of cover songs. In 1988 they appeared at the "Eurorock Festival" in Groningen, Holland (a major showcase of European underground/independent music) where the legendary journalist and music Critic, 'Wierd Duk' wrote:

“Apart from the solid ramones-like rock’n’roll of The Golden Horde, the rest of Europe had no bands worth mentioning”. That night, the Horde followed up an intense one hour and forty-five minute set performance at the festival, with a legendary, secret free show at “Club Vera”, a renowned and beloved venue in that same city. Dec 1988, The band contributed to the Temple St Children's Charity Concert, performing along with The Hothouse Flowers, The Pogues and The Dubliners.
Other recording projects/collaborations during this time period were the sessions written & recorded with Mick Blood of Australian band "The Lime Spiders", which generated the songs "Solar System" & "Repetition!".

Recording under the pseudonym 'The Last Bandits' (i.e. The Golden Horde and friends— with Anthony Thistlethwaite, Henry McCullough, Mark Sheppard, Steve Wickham, Johnny Fean and Nikki Sudden amongst other contributors) yielded the recordings "Til The Next Goodbye", 'The Angels are Calling' and "Christmas Morning". Some of these, as well as other rarities e.g. The Golden Horde b-side "I'd Much Rather Be with the Boys", can be viewed on YouTube. Yet another external Golden Horde project of note was their contribution to the Aidan Walsh: Master of the Universe recordings.[1] During this era the band performed with Psychic TV, The Ramones, The Pogues, Zodiac Mindwarp, The Damned and The James Taylor Quartet amongst others. They also performed at the legendary Clifden Music Festival with the Waterboys & Bob Geldof.

An unreleased album, known as The Recording Company, recorded with Paul Thomas[2] (U2, Clannad), as well as further unreleased recordings with legendary producer Denny Cordell, and other demo and live recordings, continue to surface on Horde fan sites across the internet (see "SoundCloud", YouTube, "BandCamp", Facebook, and LastFM etc.).

From April–May 1990, Johnny Thunders during an acoustic tour of the UK and Ireland joining up with John Connor, Sam Steiger & Peter O'Kennedy of The Golden Horde for electric performances. Johnny had befriended and performed with the Horde previously in 1984 at the TV Club, Dublin and Belfast and both acts were concurrently on tour (of the UK & Ireland) at that time. 8 May 1990, recording sessions in London for a joint EP-single cover version with Johnny Thunders and The Golden Horde of "Sugar, Sugar" by The Archies, and original material, had to be cancelled when Johnny experienced "health problems" following his performance in Wakefield, UK while on tour. Bootleg live recordings, although very poor in quality, do exist ""Louie, Louie/Hang on Sloopy": Johnny Thunders with The Golden Horde".

In 1990 The Golden Horde signed to Mother/Island Records label. The independent-style label had been established by U2. Recordings for the singles "100 Boys" and "I Never Came Down" were initiated with producer Daniel Rey (Ramones, Misfits, Ronnie Spector), and completed with co-producer Andy Shernoff (The Figgs, Guided by Voices, The Dictators) for the album that would be self-titled The Golden Horde. During this period the band toured with The Damned, The Ramones and The Cramps amongst others.

Music videos for "100 Boys" and "Friends in Time" (see YouTube) were directed by Ritchie Smith, who as a result, was later employed to work with U2 on the videos for "The Fly", "Even Better Than the Real Thing", "Mysterious Ways", "Until the end of the World" and "Last Night on Earth". He also later created work for The Verve amongst others.

The Golden Horde headlined 'The European Skateboarding Expo Festival'—an event held in 1991 at The Point Depot, Dublin. During this time period they performed along with Sonic Youth, Red Hot Chilli Peppers and Sugar at the SunStroke Festival, numerous 'Feile' and 'Fleadh Mor' festivals, as well as many other european festivals.

Released in 1991, the album "The Golden Horde" was voted joint No. 1 record with U2's Achtung Baby in the Hot Press Music Awards of that year.[3] Singer and Golden Horde cohort Maria McKee, contributed vocals to the song "Friends in Time" and "Hell" amongst others on the album. The album was celebrated in the book 101 Irish Records You Must Hear Before You Die, released in 2012. Some single releases were "100 Boys", "Endless Weekend", "Hell (live)", "I Never Came Down" and "Friends in Time". Official video releases as well as many 'fan-made' videos and a new series of unreleased demos and live material are available for viewing on The Golden Horde on YouTube. In 1992-93 Tim McGrath succeeded Peter O'Kennedy as drummer. The band supported U2 on the Zoo TV 'Zooropa' tour in 1993.

The Golden Horde disbanded in early 1994.
Sam Steiger is now with The Sultans of Ping FC.
John Connor is now based in NYC. One of his solo projects is under the alias 'messyheads' [4][5]
Peter O'Kennedy now works in sculpture, art and design.[6]
Des O'Byrne is a DJ in Manhattan, NY.
Simon Carmody now pursues a career in screenwriting.
other members have included: 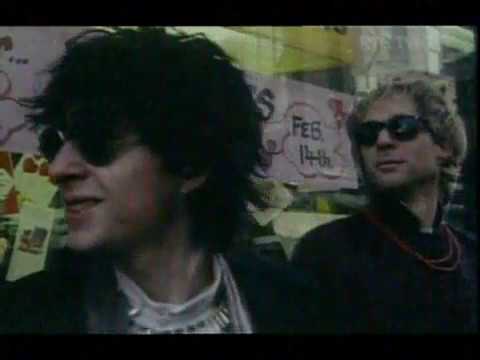