Letting Go is something The Darins have learned a lot about since Pamplin Music released their self-titled debut in 1999. So when this phrase appeared in not one but two songs on their new CD, it seemed the perfect title for the sophomore release from this talented sister act. The theme set forth in the infectious, rhythm-infused “A Matter of Trust,” and echoed in the lush pop ballad, “Take Me,” has become the cry of The Darins’ heart. When they sing, “Give it up, let it go, let God have the c...

Letting Go is something The Darins have learned a lot about since Pamplin Music released their self-titled debut in 1999. So when this phrase appeared in not one but two songs on their new CD, it seemed the perfect title for the sophomore release from this talented sister act.

The theme set forth in the infectious, rhythm-infused “A Matter of Trust,” and echoed in the lush pop ballad, “Take Me,” has become the cry of The Darins’ heart. When they sing, “Give it up, let it go, let God have the control of your life,” they mean it. They’ve learned that grabbing hold of God’s hand means “letting go” of the things you hold, or think you hold, in your own hands... like complete control over your life, your career, or your loved ones’ well-being.

In less than two years, Krista, 28, Stacy, 27, Rachelle, 24, and Heather, 23, have moved cross country (from Buena Park, CA, to Nashville, TN); endured the struggle of Stacy’s yet-unfulfilled desire for a child; and gone public with Heather and Rachelle’s battle with a seizure disorder.

Though their debut CD spawned two top-10 adult contemporary radio hits (“Faith in You” and “Crosses and Crowns”), it didn’t achieve all that they hoped it would.

“We’ve learned to let go of a lot of ‘stuff,’ ” says Krista. “Mainly, our own ambition, as we’ve seen how our ministry has affected people’s lives. People come up to us after concerts and thank us for being ministers and not just entertainers. That’s where our hearts are—that’s what has become our passion. That’s the huge growth that we’ve had as a family, as sisters.”


“Family to family” ministering is what matters most to The Darins, perhaps because they’ve experienced first-hand the value of a solid Christian upbringing. They were raised in Southern California as a part of a close-knit family that nurtured faith, music and togetherness—whether it was harmonizing in the family sedan, staging Broadway musicals in the den or playing sports together. Their mom, a music teacher, and father, who played the trumpet, introduced them to all kinds of music—from classical to contemporary Christian, from Broadway to Motown. But it was the soccer and softball fields, not the rehearsal room, where The Darins spent most of their free time while growing up.

Krista recalls singing her first solo at age eight, though she cried afterwards, thinking music was not for her. The girls also recall staging Broadway musicals at home, as well as singing along to their favorite artists, Whitney Houston, Boyz II Men and Mariah Carey. The sibling harmony of BeBe and CeCe Winans also inspired them, as did other contemporary Christian artists such as Take 6 and Crystal Lewis. The Darins even attended the church pastored by the father of Christian singer Crystal Lewis. Her ministry inspired the sisters to pursue a career in Christian music.

Right after high school, Krista and Stacy formed an R&B band that made a name for itself performing in bars and clubs in Hollywood. But, when a deal with Motown fell through, they sensed God’s protection from a career they were never meant to have. In 1995, all four sisters began performing together, first in a tribute to their high school music director, and afterwards in concerts throughout Southern California. Then, in December 1996, the music minister at their church introduced them to producer Dino Elefante, Sr. Vice President of A&R at Pamplin Music. That meeting eventually led to their recording contract with Pamplin.

It is Dino Elefante, and his brother, John, who have produced both of The Darins’ CDs. This time, though, The Darins participated more fully in the recording process, choosing the songs they wanted to record and even co-writing three of the songs, “Can’t Stop”, “Let Forever Begin” and “Out of the Rain.”

Their optimistic trust in God is woven throughout the R&B-flavored, energetic pop of Letting Go. The Darins’ blue-eyed sister soul is carried on the wings of melodic pop hooks straight to heart of listeners. Songs such as the danceable “Head Up To The Sky” and the upbeat “I Know” showcase The Darins’ dynamic harmony behind the diva strength of lead vocalists Krista and Stacy. Their passion to share their faith is evident on songs such as the hopeful “Let Forever Begin” and the urgent “Can’t Stop” which affirms, “I want them to know You’re the love of my life.” Their amazement at a God whose mercy extends to all, even to them, is powerfully expressed in the emotive duet with Jonathan Pierce, “Somebody Like Me,” and the awe-inspiring ballad, “The Greatest Miracle.”

The fact that relationships are of primary importance to The Darins is emphasized in the song “Samaritan Way,” which encourages coming alongside friends in need. They are advocates of what they call “friendship evangelism,” a philosophy they put in action on a recent missions trip to Sweden with Nashville-based Ultimate Goal Ministries. The Darins, along with a team of teen girls, combined two of their favorite pastimes—singing and soccer—on the two-week trip to Sweden for soccer’s Gothia Cup championship.

“We were really encouraged by the teens’ willingness to be open and share their faith, and the great sportsmanship on the field. We were encouraged by their boldness. After each game they’d pass out New Testaments to the other teams and share Christ with them,” says Stacy. “We planted a seed in the people we talked to. Maybe one day it will be watered and will blossom. We realized that the only thing that we can do is tell people about Jesus, the rest of it is up to Him—He’s the one that’s going to change lives.”

It’s seeking after God, and not industry accolades, that keeps The Darins focused on what really matters. Their vulnerability in sharing their struggles has also endeared them to those who attend their concerts and buy their CDs.

This became most apparent after The Darins began to talk about two of the sisters’ private struggles with a seizure disorder, a year after Heather narrowly escaped serious injury in a car accident caused by a blackout seizure. “I’ve never asked God why He gave this to me,” says Heather. “But I did try to handle it all by myself until the accident. Afterwards, I realized that I could have been killed, or injured someone else, but no one was hurt. God used the accident to show me that He is in control, and it was like a ton of bricks rolled off my chest.”

Acknowledging their dependence on God has helped both Heather and Rachelle to come to terms with the way the disorder affects their lives. Though Heather continues to have petit mal (smaller) seizures, it’s been over a year for Heather and three years for Rachelle since they’ve had grand mal (larger) seizures. Each year that passes without a grand mal seizure for either of them is a time of celebration for their family, though they’ve learned to abide in the grace and mercy God provides in the midst of the struggle.

“For a long time, we thought it was a rare thing that few people had, but now we go to churches and moms come up and tell me that they have it, or that their son or daughter has it, and I’m able to talk to them,” says Heather. “ It’s also been a blessing because our audience is able to minister to us as well.”

Rachelle adds, “We try to glorify God in everything, and He’s shown us what we need to do with this particular struggle, and that is to tell other people.”

By telling their story, they’ve opened the gate for ministry to flow into their own lives as well—not only for Heather and Rachelle, but also for Stacy and her husband Bill as they deal with trying to have a baby. The only married member of The Darins, Stacy shares her struggle because, as she says, “If I can help people with the same problem, and if it makes us have that bond, then it’s all worth it.”

The kinship of shared suffering motivates many people to reach out to Stacy and Bill, not to receive comfort but to give it.

As Krista reports, “Couples come up after concerts with these amazing stories about their own struggles and how, in many cases, God finally blessed them with a child. That’s encouraging for Stacy and Bill to hear.”

For these couples, and partly as testimony to their parents’ 30-year marriage, The Darins have included a song called “Out of the Rain” on their new CD, which encourages the kind of communication with God and with each other that fosters healthy relationships. “I’m sure there were times our parents wanted to call it quits, but if they had, none of us would be here,” says Stacy. “We want to remind couples that marriage is a commitment and a vow they make to God, and they need to look to Him to help them work things out.”

The Darins can’t stop telling the world about Jesus, and their firm belief in God’s miraculous ways keeps them from letting go of Him, no matter what. “Going to Sweden with Ultimate Goal was our very first overseas missions trip, and we were a little apprehensive because we didn’t really know what to expect,” says Krista. “But I think God used it to take us out of our comfort zones and totally rely on Him to give us the courage to go up to total strangers and tell them about the Lord.”

Taking people out of their comfort zones to totally rely on Him—that’s the thread that runs through Letting Go, and a constant theme in the lives of The Darins. For four sisters from southern California, Letting Go means holding the hand of their creator, and trusting Him to lead the way in their music, their ministry and their lives, while reaching out to take the hand of a friend. Read more on Last.fm. User-contributed text is available under the Creative Commons By-SA License; additional terms may apply. 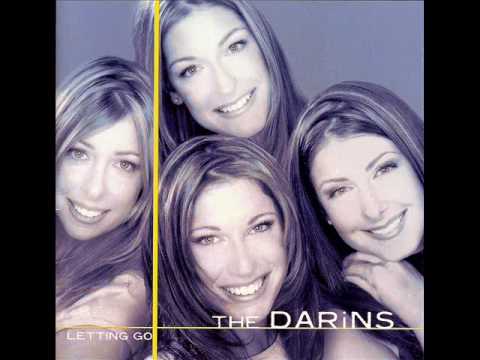