The CNK plays a kind of Electro Black Metal. The band changed its name two times: from Count Nosferatu, to Count Nosferatu Kommando, and now The CNK, which means "The Cosa Nostra Klub". 1996. After being fired from his first band Malveliance as he was accused of being too bossy with his fellow band members – it seems that his charisma was already a problem for some people – Nicolas Saint Morand (best know under the Hreidmarr moniker) founded the Count Nosferatu Kommando, aka CNK, together with...

The CNK plays a kind of Electro Black Metal. The band changed its name two times: from Count Nosferatu, to Count Nosferatu Kommando, and now The CNK, which means "The Cosa Nostra Klub".

1996. After being fired from his first band Malveliance as he was accused of being too bossy with his fellow band members – it seems that his charisma was already a problem for some people – Nicolas Saint Morand (best know under the Hreidmarr moniker) founded the Count Nosferatu Kommando, aka CNK, together with very close friend Jean-Sébastien Ogilvy (aka Heinrich Von B). The boys’ goal was quite simple: to create the dirtiest, meanest and most borderline black metal band ever. CNK scoured the local bars and took part in a few underground festivals with haphazard performances, but they eventually got noticed thanks to the chaotic and quite dangerous atmosphere they delivered through their shows. After two rather badly produced demos and the recording of a track meant to appear on a compilation that would foresee their upcoming musical style, CNK was put aside in 1999, due to Hreidmarr’s busy schedule as he just joined symphonic black metal act Anorexia Nervosa.

The band’s real rebirth came in 2002, with the release of properly entitled “Ultraviolence Über Alles” album, on the late Kodiak Records label. This hard to describe and scathing first opus would spread the word about CNK in France, since nobody could be indifferent to it:
“Ultraviolence is not a phoney title, since the production and martial rhythms really hammer you to death. […] No one in France had ever dared to put out an electro metal album so full of surprises, so innovative and so violent. This unlikely but seemingly real meeting between Rammstein and Slayer, Skinny Puppy and Deicide, sounds like some “Jesus Christ Superstar”-era Laibach doped with electro black-metal.”
Pierre Rossignol, D-Side Magazine.“ CNK depicts today’s world and its stupidity with coldness, scorn and smartness. That’s why this fucking new Baader-Meinhof Gang is so scary, and will most probably kick the national microcosm’s ass, who seems to be yearning for it.” Philippe Lageat, Rock Hard France.
Due to a lack of steady line-up, CNK wasn’t able to support their album on stage. Then, because of several problems such as the label’s demise, the band was once again put aside.

When Hreidmarr left Anorexia Nervosa in December 2005, Heinrich and himself immediately came up with the idea of resurrecting CNK and making it their top priority. Count Nosferatu Kommando thus became Cosa Nostra Klub, and Heinrich locked himself in his home studio to write the rightful successor of “Ultraviolence Über Alles”. Two new members then joined the fold: arty designer Jean-Emmanuel Artfield-Lautrec (aka Mr. Valnoir) on bass, known for his outrageous artworks with Metastazis, and French EBM star Sylvain Deslaves (aka Mr. Sylvicious) on drums, also a founding member of Tamtrum and acting drummer in Punish yourself.

By winter 2007, CNK entered the Drudenhaus studio with Stefan Bayle (Anorexia Nervosa), to record sophomore album “L’Hymne à la Joie”, a more orchestral, more martial and more subversive opus, widely influenced by classic science fiction films and novels (e.g. Brave New World, A Clockwork Orange, 1984, Farenheit 451, Soylent Green…). Back from the studio, the band signed a deal with Season of Mist, and “L’Hymne à la Joie” was released in late 2007.
In 2009, after the departure of Valnoir and Sylvicious, replaced by Zoé H on bass and Volponi on drums, came out the reissue of the sold-out first album. “Ultraviolence Über Alles Übercharged Edition”, featuring as bonus tracks the entire album covered or remixed by artists such as HIV+, Blackrain, Varsovie, Herrschaft…

Fall 2012, the scandalous collective is back with “Révisionnisme”, a cover album taking on some famous pop, rock and metal standards. Devastation, beating up, sabotage, profanation: words don’t fail to describe the offence the band is just about to give to the Occident’s outraged face.
Supported on this opus by the crazy veteran Snowy Shaw (King Diamond, Mercyful Fate, Dream Evil, Dimmu Borgir, Notre Dame, Therion…), The CNK mistreats 10 different artists such as the Beastie Boys, Leonard Cohen, Emperor, Nick Cave & the Bad Seeds, Guns n’ Roses, or even the very controversial Gary Glitter!

With the help of heavy industrial and authoritarian rhythmics, backed with Snowy and Hreidmarr über versatile voices, these 10 hits are crushed in The CNK steamroller, to finally be born again as death and fight stadium anthems.
The bell tolls for the Western culture! Here is its Requiem as it’s supposed to be: subversive, amoral, cruel, and violently funny.

You can already listen to one song of the futur album of The CNK:
Cosa Nostra Klub

The Official message board:
http://thecnk.easyforum.fr/ 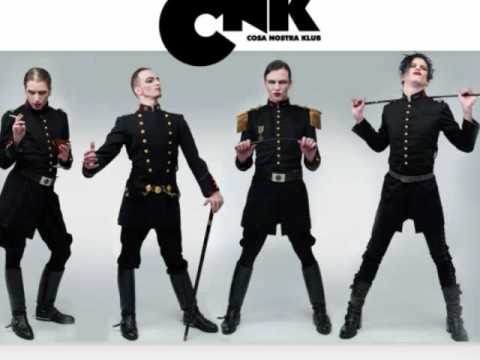