The Brunettes were formed in Auckland, New Zealand in 1998 by musical couple Jonathan Bree and Heather Mansfield. They were a paradox from the beginning - creating boy/girl melodramatic pop inspired by 70s New York punk and 60s girl groups but surrounded in an Auckland scene of opiate-infused garage rock 'n' roll. Inspired by his dreams of domestic bliss while a teenager living in rat infested junkie flats, and in direct rebellion to the messy hair, tight pants and leather jackets of the local...

The Brunettes were formed in Auckland, New Zealand in 1998 by musical couple Jonathan Bree and Heather Mansfield. They were a paradox from the beginning - creating boy/girl melodramatic pop inspired by 70s New York punk and 60s girl groups but surrounded in an Auckland scene of opiate-infused garage rock 'n' roll. Inspired by his dreams of domestic bliss while a teenager living in rat infested junkie flats, and in direct rebellion to the messy hair, tight pants and leather jackets of the local music circle - Jonathan decided to craft a carefully constructed 'cutesy carpenteresque consumerist' image for the duo.

The Brunettes soon produced "Mars Loves Venus," a lathe-cut EP pressed up by King Records, Geraldine. The short run quickly sold out and Jonathan set to work demo-ing up the band's first six albums. Heather and Jonathan's relationship suffered, understandably. Heather was often seen in New Zealand's society pages with champagne flutes in each hand, while Jonathan's striving for sonic perfection within the constraints of four-track cassette recording drove him to Smile-like levels of madness.

Dressed in his fireman's helmet, Jonathan applied for a job at Marbecks, a downtown Auckland record store. It was while he worked there that one of those four-track recordings, 'Talk to Jesus', was noticed by local manager and promoter Melinda Olykan on Auckland's student radio station BFM. Pulling out her cheque-book straight away, she managed to get Jonathan away from the store counter for a two-figure sum, and soon the Brunettes were playing shows again. They developed a reputation for quiet, intimate shows of fragile garage pop, the audience laughing at the wry pop culture references in the lyrics, and shushing each other for talking during the songs.

The Brunettes finally released their debut album Holding Hands, Feeding Ducks in the spring of 2002, and six months later put out a mini album, The Boyracer E.P. The uniqueness of these releases and the engaging charm of their live show, gained them a swooning national fan base in New Zealand, made them darlings of its college radio stations, and placed them as the nation's undisputed number one bubblegum pop band. Tours of Australia and the United Kingdom in 2003 and 2004 put the Brunettes in the hearts of indie-pop fans in those corners of the globe too, with rapturously received shows with Architecture in Helsinki, the Postal Service and the Futureheads. It was at one of these shows that they first won the heart of Sub Pop bigwig Jonathan Poneman, a relationship which would later culminate in a record deal.

In June 2004 they released their second album, Mars Loves Venus, which reprised the title track of their very first release, and saw the production progress from the bedroom Spector-isms of Holding Hands Feeding Ducks, to a multi-spectral smorgasbord of pop production references from the Grievous Angel to Paisley Park.

Since this release, the Brunettes live show has grown in stature to accommodate the so-dubbed "Lil' Chief Pop Orchestrette," a changing, waxing and waning crew of amateur instrumentalists associated with Auckland's Lil' Chief Records.. Sometimes touring as a five piece and sometimes playing as a ten piece orchestrette, the Brunettes incorporate marimba, glockenspiel, banjo, cello, trumpet, alto and tenor saxophone, the clarinet and more.

In 2005, the Brunettes were invited to tour the US with the Shins, Rilo Kiley and later a tour supporting Clap Your Hands Say Yeah. To coincide with this - their first tour of North America, the Brunettes released their second E.P 'When Ice Met Cream' which featured six tunes, some new and some favourites of live shows dating back to 2001.

2007 saw the release of the Brunettes third album "Structure and Cosmetics" - an album drawing heavily on the ideas of domestic bliss and consumerism which had been so influential in their early beginnings. It was however, as most Brunettes albums are, coupled with dark and sometimes sinister undertones - perhaps a testament to the emotional hardships brought on by excessive touring. Sonically, there was an introduction of more electronic elements on the album than had existed on previous recordings. This would be their first album to become available in North America and Europe - being released in those territories by Sub Pop Records. The Brunettes supported this vote of confidence by touring for the best part of a year throughout the globe, both independently and alongside 'Broken Social Scene', and Sweden's Shoud Out Louds. At the end of this tour, the Brunettes were in invited to appear on the album 'Just Like Heaven - A Tribute to The Cure' (American Laundromat Records) so they set about recording their very own version of "Lovesong".

Sense of fun firmly intact with new record Paper Dolls, The Brunettes have managed to build on previous work without sacrificing the aesthetic that has gained such wide-spread acclaim, instead injecting their new batch of songs with a sense of modernity. Opener “In Colours” and closer “Thank You” are entrance and exit into this world, as both sit comfortably with previous efforts; in between, however, principle songwriter Jonathan Bree has augmented his pop leanings with drum machines and an intimidatingly wide array of synths to fantastic effect.

Lyrically, the album combines clever call-and-response levity, an undercurrent of smoldering romance, and a penchant for idiosyncratic storytelling. All are on display in lead single “Red Rollerskates”, which finds Jonathan and (Brunettes co-lead vocalist/instrumentalist) Heather Mansfield solving their relatively ordinary problem (Jonathan walks too fast for his asthmatic girlfriend) with a quirky but playful solution (buying her a pair of red rollerskates and pulling her around with a rope). On “The Crime Machine”, Heather longs to live as a 1920’s Queen-pin, “Bedroom Disco” (fast becoming a live favorite) lives up to it’s title as a stay-at-home party song, and the title track combines surreal lyrics about a stationary fetish with (good) Bond-movie string arrangements and guitar tremolo.

A short and concise 35 minutes, Paper Dolls reaffirms the glory of a simple melody. “Thank you for the time,” Heather sings to close out the record. So polite, those New Zealanders. Read more on Last.fm. User-contributed text is available under the Creative Commons By-SA License; additional terms may apply. 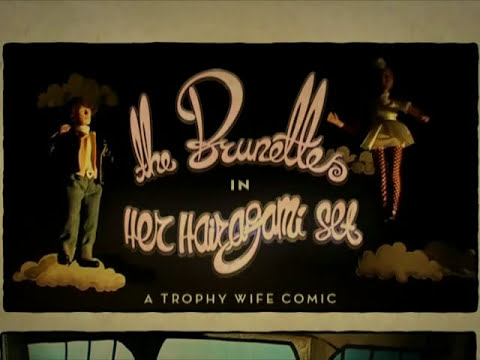