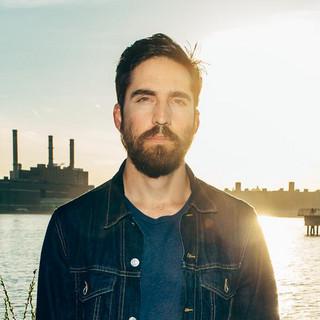 The Album Leaf officially began in 1998 as the solo project of Jimmy LaValle, guitarist for San Diego, California-based post-rock band Tristeza. LaValle has also performed in several other San Diego-area bands, including Swing Kids, The Locust, GoGoGo Airheart, and The Black Heart Procession. An Orchestrated Rise to Fall Jimmy LaValle had been playing an ocarina in the post-rock instrumental band Tristeza. Being a multi-instrumentalist, during downtime in the fall of 1998, he began playing dru...

The Album Leaf officially began in 1998 as the solo project of Jimmy LaValle, guitarist for San Diego, California-based post-rock band Tristeza. LaValle has also performed in several other San Diego-area bands, including Swing Kids, The Locust, GoGoGo Airheart, and The Black Heart Procession.

An Orchestrated Rise to Fall

Jimmy LaValle had been playing an ocarina in the post-rock instrumental band Tristeza. Being a multi-instrumentalist, during downtime in the fall of 1998, he began playing drums for San Diego band GoGoGo Airheart. The singer and guitarist for the group, Mike Vermillion (which later inspired the song name "Vermillion" on One Day I'll Be on Time) recorded LaValle doing improvised material playing to a vintage roland drum machine on a Rhodes Piano that would become his first full-length album, the 10-track An Orchestrated Rise to Fall. Benjamin White of GoGoGo Airheart and Vermillion both supplied added improvisation with synthesizers and vocals to these recordings.

Before Tristeza released Spine and Sensory on Makoto records in 1998, the band was talking with a handful of different indie record labels. One of the record labels was "The Music Fellowship" out of Salt Lake City, Utah. LaValle asked them if they would be interested in releasing his solo material. They accepted, and An Orchestrated Rise to Fall saw release in 1999 on CD. Later in the year, Tristeza and The Album Leaf both signed with newly started Tigerstyle Records out of New York City. A&R rep for the Tigerstyle, Mike Treff, had previously done his own record label named Linkwork Records. Tigerstyle wanted to release the vinyl version of An Orchestrated Rise to Fall, since it would be one of the first Tigerstyle releases, and being only on Vinyl format, Mike opted to make it Linkwork Records last release.

LaValle played his first official Album Leaf show at the Che Cafe in the winter of 1999. Band members for this show consisted of Rafter Roberts, Jimmy Lehner (of Tristeza), Leilani Clark (of local San Diego band, "the Straight A's" also with LaValle), and Benjamin White (of GoGoGo Airheart).

One Day I'll Be on Time

Soon after signing with Tigerstyle Records, LaValle received his first recording advance. He used this money to buy his first computer, and purchase equipment for a home recording studio. He did his first recordings and those songs were released as a 4 song EP entitled In An Off White Room on Troubleman Records Unlimited. The title for the EP was named after the color of his home studio, which was in his living room. During off time of Tristeza's busy tour schedule promoting their Tigerstyle records release of Dream Signals in Full Circles in 2000, he began writing One Day I'll Be on Time.

The Album Leaf performed their second show during Tristeza's 2000 spring tour, at South by Southwest in Austin, Texas. This show was at Club Deville, at a day party for online distributor, Insound.com. This line-up consisted of Lavalle, Leilani Clark on guitar and keyboards, Tana Helean on keyboards, Susanna Waiche on bass and Jay Hough (of GoGoGoAirheart) on Drums. They shared the stage with Tristeza and The American Analog Set. This lineup also did a 4 week U.S. tour in the summer of 2000 with Andy Robillard (also of GoGoGo Airheart) replacing Hough on Drums.

After the summer tour, he took a full time job in San Diego at newly started music house, "Singing Serpent" producing jingles for television commercials. This also gave him access to a full service recording studio. LaValle used this studio to re-record the material he had written for One Day I'll be On Time. Rafter Roberts recorded the track "Storyboard" and can be heard in the beginning of the song talking with LaValle about his guitar tone. Jason Soares of San Diego band Aspects of Physics provided drum programming for the song "Vermillion", and fellow Tristeza band-mate, Christopher Sprague, played guitar on "In Between Lines" and designed the album art. After completing this record, LaValle left Singing Serpent citing "Making jingles was killing my creativity!"

One Day I'll Be on Time saw worldwide release in early 2001. Jón Þór Birgisson of Icelandic band, Sigur Rós, picked up the record at a record store in Reykjavík, Iceland. This prompted them to ask LaValle to support their upcoming U.S. tour. This would put The Album Leaf in front of new audiences, which helped the band gain popularity. The Album Leaf supported Sigur Rós on their first full US tour. This line-up consisted of LaValle, Luis Hermosillo (of Tristeza) on bass, Nathan Delffs on keyboards and guitar, Eric Hinjosa on keyboards and Andy Robillard still on drums. This line-up also toured the U.S. during December of 2001 and Summer 2002 without Hinojosa.

During this time LaValle wrote 2 songs for Conor Oberst of Bright Eyes to sing on and 2 songs for Marc Bianchi of Her Space Holiday beginning a series of 7" singles entitled the "Collaboration Series" released by Better Looking Records. This series is limited to 1000 copies and is only available to subscribers. The tracks with Oberst were titled "Hungry for a Holiday" and "Bad Blood". The tracks with Bianchi were titled "Call in Blue' and "Reso" (after future violinist, Matt Resovich). The Her Space Holiday collaboration would not be released until 2003.

In January of 2003, The Album Leaf toured Japan for the second time. The first time was an opening slot for LaValle's band, Tristeza, in spring of 2002 where he performed with fellow band members Luis Hermosillo and Eric Hinojosa. This was a headlining tour with fellow San Diego band, Ilya supporting. LaValle enlisted Duane Pitre, Matthew Baker and Hank Morton of Ilya to back him along with Robillard on drums.

Immediately following this tour, LaValle was offered to support Sigur Rós' European tour. This tour he performed solo and started incorporating electronic beats and loop pedals into his live show in order to perform his songs as a one man band. Later during this tour, Kjartan Sveinsson, Orri Páll Dýrason and María Huld Markan of Sigur Rós and Amiina respectively, began to join LaValle on stage performing on a couple of songs during his half-hour performance slot.

Upon returning home, he had put together another line-up for supporting the U.S. portion of Sigur Rós' tour. This line-up was Hermosillo, Delffs with Tim Reece now on drums. Kjartan Sveinsson, Orri Páll Dýrason and María Huld Markan would still join them on stage. This tour saw the Album Leaf playing at music venues such as Radio City Music Hall in New York City, gaining even more popularity for the band.

After these tours, LaValle decided to leave Tristeza and focus on the Album Leaf full time.

A Lifetime or More and the Seal Beach EP

During the following months of 2003, LaValle began recording again. He recorded 3 tracks for a split EP with New York City's, On! Air! Library! for the Arena Rock Recording Co. called A Lifetime or More. Drew Andrews provided guitar for the track "Another Day". During May of 2003, with his new addition of electronic beats, he recorded 5 songs released as the "Seal Beach EP" for Spanish record label Acuarela Discos.

In August of 2003, The Album Leaf headlined a tour of the U.S. with fellow San Diego band, Ilya. This tour introduced the Album Leaf's use of live visual projection art by Andrew Pates and the line-up went down to just LaValle and Drew Andrews on keyboards and guitar with them incorporating laptops and Pates projecting visuals onto a backdrop of the stage. The line-up was becoming more permanent.

Following this tour, LaValle traveled to Iceland to begin recording his third full length. During the Sigur Rós European and U.S. tours. LaValle received an invite from Sigur Rós to record in their Icelandic studio. During these recording sessions the Album Leaf performed 2 shows in Iceland, one being a part of the Iceland Airwaves music festival with LaValle being backed by Kjartan Sveinsson, Orri Páll Dýrason and María Huld Markan of Sigur Rós and Amiina with Sindri Mar Finnbogason playing bass.

In a Safe Place

In the January of 2004, LaValle signed with Seattle based record label, Sub Pop Records and Berlin, Germany based European label City Slang Records. LaValle completed In a Safe Place in February of 2004. Jón Þór Birgisson, Kjartan Sveinsson, and Orri Páll Dýrason (most of the members of Sigur Rós), María Huld Markan (of Amiina), Gyða Valtýsdóttir (formally of múm) , Pall Jenkins and Matt Resovich (of the Blackheart Procession) all contributed to the record with Birgir Jon Birgisson, “Biggi,” engineering at Sigur Rós’ Sundlaugin studio.

In a Safe Place was released on June 22, 2004. The Album Leaf played a record release show at M-Theory Records in San Diego with its current line-up of Matt Resovich on violin, keyboards, glockenspiel, guitar, and vocals, Drew Andrews on guitar, keyboards, and vocals, Tim Reece on drums and keyboards with Andrew Pates projecting live visuals. Following the release, the Album Leaf toured for a year with little time off performing in the U.S., Europe, Taiwan, and Japan. During this time, the Album Leaf self released the Red Tour EP with 5 tracks. This was to showcase the band as individuals and each member (With the exception of Reece) providing their own song, the cd is also enhanced with a tour video made by Andrew Pates. The EP also featured a live recording of "Micro Melodies" a song that only appeared on the soundtrack for the film Moog, a documentary about Robert Moog, the inventor of the Moog synthesizer. The track "Over the Pond" is also used in the film The Family Friend (L'Amico di Famiglia) by Paolo Sorrentino.

This record saw more commercial success and popularity establishing LaValle's The Album Leaf on the map and playing to bigger audiences.. Many of the tracks from In a Safe Place were used in the soundtracks for television shows such as The OC and CSI: Miami.

Following the extensive touring, LaValle re-joined Tristeza filling in on guitar for 2 shows in Guadalajara and Mexico City in place of Alison Ables, the replacement to the band for himself. When he returned, LaValle began writing his next full length.

In December of 2005, LaValle traveled to Seattle, Washington to Bearcreek Recording Studio to begin tracking the record. After tracking, he then traveled back to Sigur Rós’ Sundlaugin studio to mix the record with the help of Brigir Jon Birgisson and Joshua Eustis (of Telefon Tel Aviv).

Into the Blue Again

On September 12, 2006, Into the Blue Again was released on Sub Pop Records in North America. The album saw an earlier release in Germany on September 8, 2006 and throughout the rest of Europe on September 11, 2006 courtesy of City Slang Records. Into the Blue Again sees a return to The Album Leaf’s conception and LaValle handling virtually all instrumental duties. LaValle’s few collaborators on Into the Blue Again are Josh Eutis of Telefon Tel Aviv, who aided additional drum programming and engineering on choice songs, The Black Heart Procession’s Pall Jenkins adding vocal harmonies on "Wherever I Go," violinist Matt Resovich (who performs with The Album Leaf live, and also played on In a Safe Place), Drew Andrews adding additional guitar work on select songs (Drew also performs with The Album Leaf live) 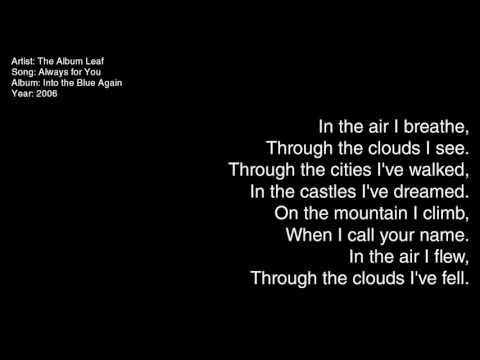 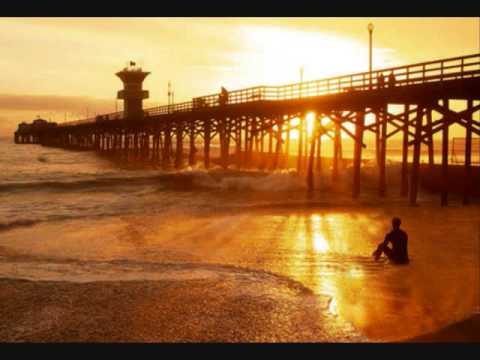 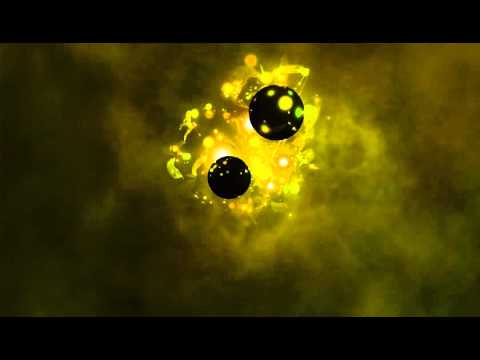 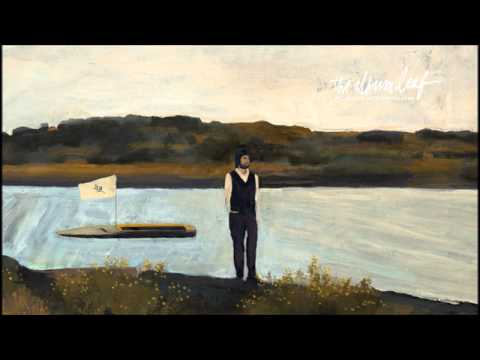 Falling From the Sun 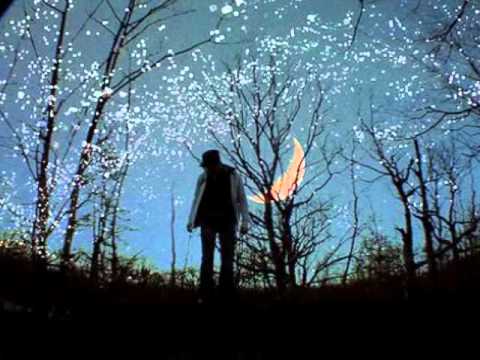 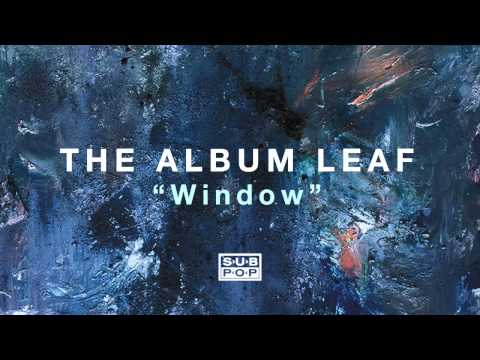 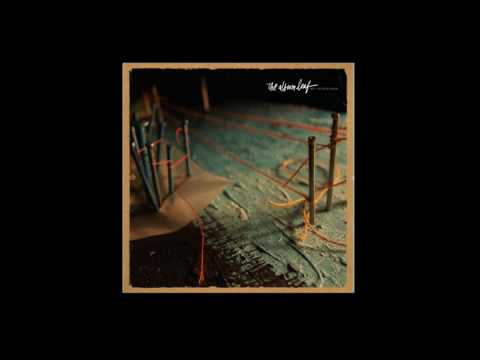