Steve Lucky and the Rhumba Bums

Called "Instant Crowd Favorites" by the San Francisco Blues Festival and "Consummate musicians and entertainers" by New York City's Lincoln Center, Lucky and Getit really shine before a live audience, bringing an intense energy and sheer personal magnetism to the stage, exercising wit in a continuous battle of the sexes. They've earned a reputation as captivating entertainers with "superior musicianship" (Downbeat), engaging audiences at the Montreux Jazz Festival in Switzerland, the Half Note J...

Called "Instant Crowd Favorites" by the San Francisco Blues Festival and "Consummate musicians and entertainers" by New York City's Lincoln Center, Lucky and Getit really shine before a live audience, bringing an intense energy and sheer personal magnetism to the stage, exercising wit in a continuous battle of the sexes. They've earned a reputation as captivating entertainers with "superior musicianship" (Downbeat), engaging audiences at the Montreux Jazz Festival in Switzerland, the Half Note Jazz Club in Athens, Greece, the San Francisco Blues Festival, as the house band at the Derby in Hollywood, and hundreds of nightclubs, festivals, and performing arts centers around the world.


Born in Seattle and raised near Detroit, Steve Lucky started playing piano at age eight and was playing and singing professionally by the time he was thirteen. He founded and led the six-piece Blue Front Persuaders through the ‘80s, playing swing, jump-blues, and ‘40s and ‘50s R & B, while living in Ann Arbor and attending the University of Michigan. Their novel sound and wild show was a big draw on the Midwest college circuit, earning them a spot on Star Search and a notable review for one of Lucky's original songs in Billboard magazine.

In 1987 Lucky moved to New York City to play keyboards for Grammy award-winning guitarist and vocalist Johnny Clyde Copeland. During the next five years he was active in the Greenwich Village music scene, was hired to score performance art and theater, and performed with a diverse group of musicians including Joan Osborne, Blues Traveler, and the Spin Doctors.

Sticking to his musical roots, Lucky formed his own band in New York City working the nightclubs and touring throughout Europe. In 1993 he moved to San Francisco and started the Rhumba Bums as a quintet, but admits the band really took shape in ‘94 with the addition of Miss Carmen Getit on vocals and guitar.

In Carmen's powerful vocals, one can hear echoes of her idols Ruth Brown, Etta James, and Dinah Washington. Miss Getit is a dynamic performer and versatile vocalist, interpreting "slick jazz a la Dinah Washington" or shouting down-and-out blues according to the Ann Arbor Observer.

Miss Getit got her musical start plucking out melodies on the piano before she learned to read. Piano lessons soon followed, and at age ten Carmen began singing and playing acoustic guitar with a group of girl guitarists at her local church. Over fifteen years later Steve Lucky bought her an electric guitar and turned her on to early blues and jazz. In 1998 she recorded a critically acclaimed release with the Rhumba Bums, "Come Out Swingin'!", earning four stars in both Downbeat and Blues Access Magazines and accolades from the press. Getit is recognized for her more swinging styles in Guitar Player Magazine as "smooth and steady", and her grittier blues playing in Experience Hendrix Magazine, where Frank-John Hadley calls Getit "one of the most striking young blues guitarists in the country".

Carmen has performed and recorded with Elvin Bishop, Willie "Big Eyes" Smith, and piano blues legend Pinetop Perkins on his CD “Ladies Man”, which was nominated for a Grammy award in 2005 and won the 2005 W.C. Handy award for "Best Traditional Blues Album". She is featured in productions like "Queens of Boogie Woogie", "Women In Blues" and "Divas of the Blues" with other women artists including Lavay Smith, Carol Fran, Wendy DeWitt and Ruth Davies, and is profiled in the All Music Guide's "500 Top Jazz Vocalists" to be released in 2005. Carmen graduated with a bachelor's degree from the University of Michigan, and received awards as a professional dancer and dance instructor.

The band is rounded out with some brilliant musicians including Scott Petersen, Matt Cowan and Doug Rowan on saxophones, Brian Fishler on drums, and Lukas Vesely on bass. They have performed and recorded with a diverse group of musicians including jazz greats Joe Williams, Dizzy Gillespie, Rosemary Clooney, Weather Report's drummer/percussionist Alex Acuña, classical clarinetist Richard Stoltzman, reggae legends The Abyssinians and Don Carlos, and pop stars Aretha Franklin, The Four Tops and the Temptations. Their accomplishments include jazz scholarships to the Berklee School of Music in Boston, and jazz faculty positions at the Stanford Jazz Workshop and Oakland University.

A knowledgeable music historian with a degree in Anthropology, Steve Lucky conducts performance-lectures on the history of boogie woogie and its significance to the evolution of American popular music.

Steve Lucky & the Rhumba Bums appeared on CNN's "Showbiz" with Jim Moret, PBS' "CD Highway", a Bravo! documentary "This Joint Is Jumpin'!", “Locals Only” on FOX, and on CBS’ Good Morning America. Look for the Rhumba Bums in "Be Cool", MGM's sequel to "Get Shorty" in 2005. Read more on Last.fm. User-contributed text is available under the Creative Commons By-SA License; additional terms may apply. 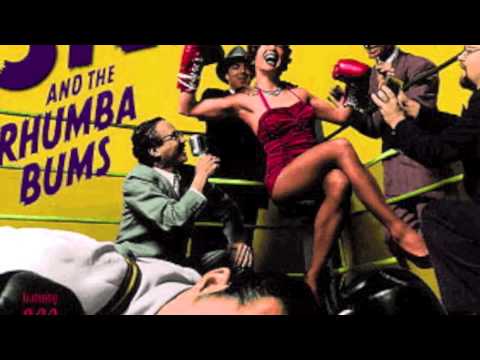