State Radio is an alternative rock group formed in Sherborn, Massachusetts, United States in 2002. They consist of former Dispatch vocalist Chad Stokes Urmston (vocals, guitar), Chuck Fay (bass) and Mike “Mad Dog” Najarian (drums), For generations of great American songwriters, the music and the message have been inextricably linked. Word and deed are one in the same, and the only thing more moving than the rousing call to action is the evocative melody that transports the words like a shell ca...

For generations of great American songwriters, the music and the message have been inextricably linked. Word and deed are one in the same, and the only thing more moving than the rousing call to action is the evocative melody that transports the words like a shell casing. These are fire-breathing poets of justice who sing about ordinary people in extraordinary ways, and can turn the world inside out with three chords and the truth. These are the tenets by which STATE RADIO’s Chad Stokes Urmston, Chuck Fay, and Mike “Mad Dog” Najarian are driven, and they once again flex that strength and sense of purpose on their third album, LET IT GO. But this is no soapbox symposium.

“It’s the only way I know how to do it,” says singer/guitarist Stokes about the band’s impassioned social consciousness. “It’s the only way State Radio has done it. This has always been an organic, grassroots thing. It’s about trying to be true to what we do.”

Like Rage Against The Machine and System Of A Down before them, State Radio roll up their sleeves as they practice what they preach, whether it’s riding bikes to gigs to support Bikes Not Bombs, hosting food drives in conjunction with Rock For A Remedy, or playing shows to raise money for the Learning Center for the Deaf. How’s Your News?, a film project created by Stokes while working at a camp for adults with disabilities, where the campers are the reporters, was just a way for Stokes and company to flip the standard interview format on its head with a different viewpoint before it was picked up by Trey Parker and Matt Stone for a run on HBO and MTV.

Action is hardly a new concept for all the members of State Radio. Before the band, Mad Dog volunteered as mentor with Big Brothers Big Sisters, while Fay was and continues to be a powerful voice for Instant Runoff Voting and comprehensive election reform across the country. On tour, State Radio has joined with Amnesty International to expose the injustices and improprieties of the legal system by protesting the death penalty for Georgia’s Troy Davis. They’ve worked to minimize wildfire danger by removing invasive plants from areas in California, and have partnered with Oxfam America to organize home run derbies and 5K road races to raise money and awareness to help protect women against violence in Sudan. Most bands have touring schedules. State Radio have an Action Calendar.

During their sold out, 25-city tour this past February, the band performed service projects in every town they visited, from serving lunch at a homeless shelter in Houston to building a community garden at an inner city elementary school in Washington, D.C. Calling All Crows (callingallcrows.org), the group’s platform for social action started by Stokes and State Radio tour manager Sybil Gallagher, is committed to continuing the group’s socio-political dialogue once the music ends and the lights come up. In less than a year, State Radio and their fans have amassed over 1,800 hours of community service through projects that have local, national, and global impact.

“There are times when there’s a service project every morning at 9am—and we’d had a late night the night before—where it’s like, ‘Are we a service group that plays music, or are we a band that does service projects?’” Stokes laughs. “There’s a balance between the two things because they feed each other. I want to experience the stuff I’m writing about.”

That same mindset held true for Stokes’ previous band, the roots rock outfit Dispatch, who formed while Stokes was a student at Middlebury College in Vermont. Though the group disbanded in 2002, they’ve reunited three times, the most notable being a three-night, sold out run at Madison Square Garden in 2007 to raise funds and awareness for poverty-stricken Zimbabwe. It marked the first time in history an unsigned band had headlined the Garden, let alone sold it out.

“It was a progression,” says Stokes’ of the shift from Dispatch to State Radio, who formed in 2002. “I think had Dispatch stayed together, all these State Radio songs would have been Dispatch songs.”

State Radio’s first album, Us Against The Crown, introduced listeners to the band’s raw, pop-punk sound. Tracks like “Mr. Larkin” and “Black Cab Motorcade” had all the boundless energy of a vigorous protest, while “Right Me Up,” a personal account of a friend with a disability, showcased Stokes’ reggae harmonies.

Their second album, Year Of The Crow, was recorded in the UK and produced by Tchad Blake (Peter Gabriel, Pearl Jam, Soul Coughing). Featuring songs like “Sudan,” “Guantanamo,” and “Gang Of Thieves,” the album pushed the group’s socio-political motivations even further into the forefront. It also broadened their sonic palette with bigger guitars (“CIA”) and more diverse instrumentation (“The Story Of Benjamin Darling, Part 1”). But the bridge between both records has always been Stokes’ transcendental storytelling, which continues to mature and evolve on Let It Go.

The album kicks off with “Mansin Humanity,” a gripping song about the Armenian genocide, then slides into “Calling All Crows,” a one-drop groove that calls the band’s legion of fans to attention as Stokes beckons, “It’s gonna be a showdown, said the rebel to the revolutionary, come with me!” Elsewhere, State Radio invoke the spirit of the Clash on “Doctor Ron The Actor” and “Knights Of Bostonia,” a raise-yer-pints anthem to the band’s hometown. (After all, Stokes did meet Mad Dog while he was drumming on a bucket outside of the home of the Red Sox Fenway Park.) Another track, “Held Up By The Wires,” mixes classic Boston references and Civil War tales with nods to Jack London’s “The Road,” sailing pioneer Irving Johnson, and Stokes’ own time spent in Zimbabwe. The track has been in the band’s repertoire since the early days, but it wasn’t until now that it found it’s way onto an album, a fact Stokes attributes to the way in which Let It Go was recorded.

While touring Year Of The Crow, State Radio enlisted Tchad Blake’s assistant, Dom Monks, as their front-of-house engineer; a critical position for a band with such a large live audience. When it came time to seek out producers for Let It Go, Monks threw his hat in the ring. He also suggested that the band record the songs in the same manner as they were performed: live off the floor, with all the instruments buzzing and howling at once.

“He has a great ear and he’s worked with the best guy,” says Stokes of his producer and friend. “He knew all our songs and he did an amazing job.”

Two-thirds of the album were recorded at Q-Division in Boston, while the remaining parts were tracked at the famous Long View Farm Studio, the preferred practice space of the Rolling Stones before all their US tours, and a location that houses just as much livestock as it does vintage pre-amps. The rustic setting provided the perfect atmosphere with which to coalesce the band’s trademark live energy, while recording straight to tape with limited tracks allowed them to be more succinct with the musical message they wanted to convey.

“We’ll take the long way around, we gather on the wall on the wrong side of town. We’ll surprise them all,” sings Stokes on “Evolution.” After years of social action and political awareness—not to mention playing in front of thousands upon thousands of fans with very little support by the mainstream—the 33-year-old Stokes knows a thing or two about how to serve up lighting in a bottle. Sometimes quiet persistence is the best way. Like when he and 15 other peers spent 28 days walking a headstone 433 miles from Sherborn, Massachusetts to Arlington National Cemetery to honor unknown civilians killed in war. (Alas, they were stopped at the bridge and not allowed to enter.) But after you’ve done the backstroke in the Lincoln Memorial Reflecting Pool and shaken hands with the Prime Minister of Zimbabwe, what do you do next?

“I think the dream would be to jump freights to each city,” says Stokes of their upcoming tour to support Let It Go. “Going out to the Democratic National Convention last year, my brother and I jumped freights from Massachusetts to Denver, then from Denver to California, opening up for Rage in the middle there.”

And have someone drive the gear?

“Or just get back line everywhere we go,” Stokes smiles, “and hit the rails that night.”

State Radio’s Let It Go is out September 29, 2009.
Read more on Last.fm. User-contributed text is available under the Creative Commons By-SA License; additional terms may apply. 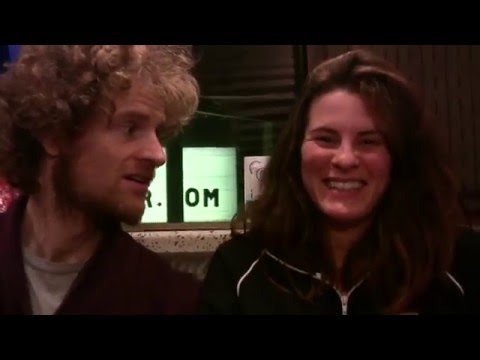 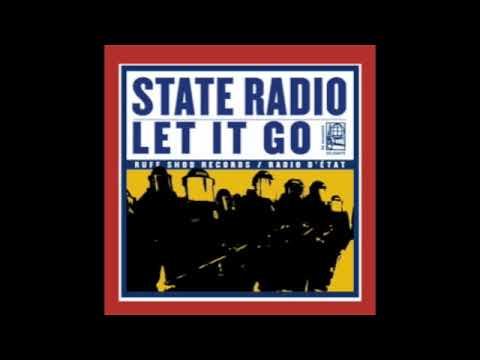 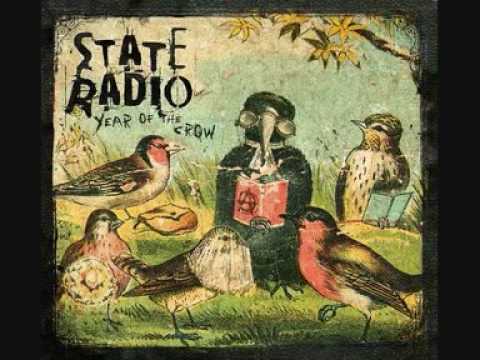 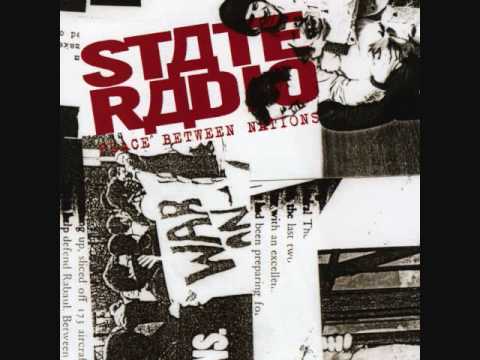 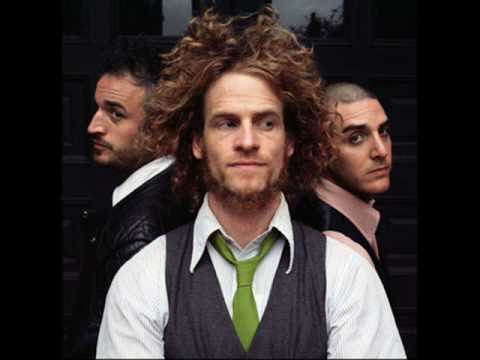 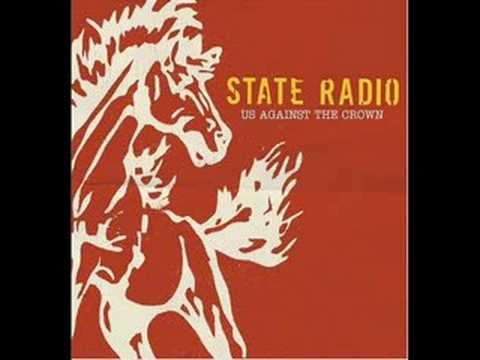 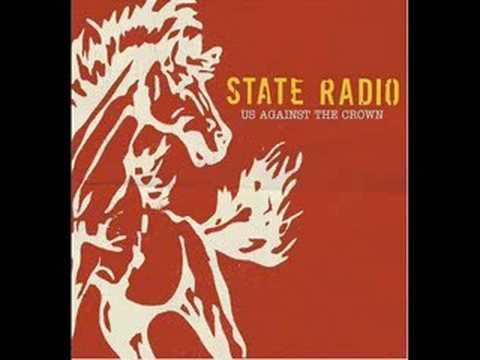 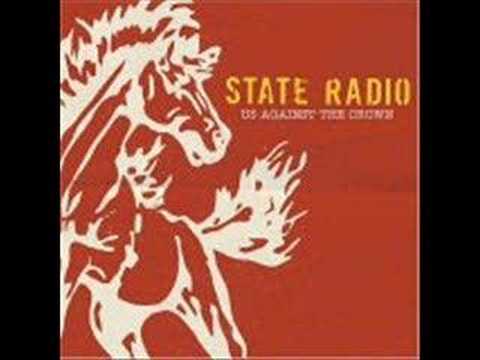 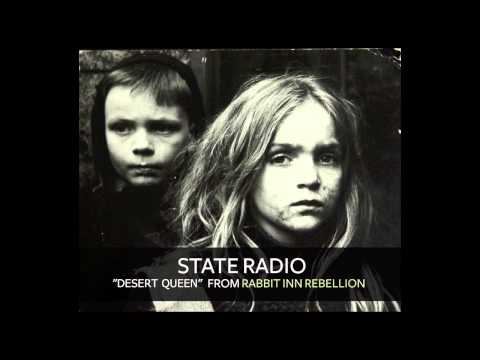 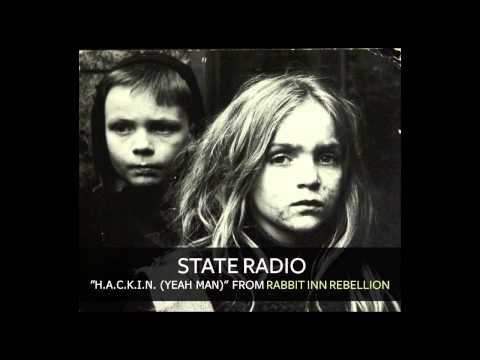 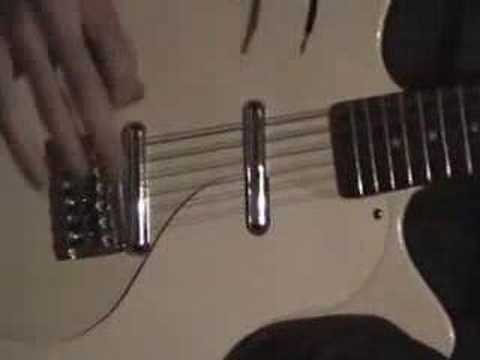