Stanley Jordan came to prominence with the release of his 1985 debut album Magic Touch, a revolutionary project that dually placed him at the forefront of re-launching legendary Blue Note Records into a contemporary entity in jazz and beyond, as well as establishing the then-twenty-something Jordan as among the most distinctive and refreshing new voices of the electric guitar. Key to Jordan's fast-track acclaim was his mastery of a special "tapping" technique on the guitar's fret board instead...

Stanley Jordan came to prominence with the release of his 1985 debut album Magic Touch, a revolutionary project that dually placed him at the forefront of re-launching legendary Blue Note Records into a contemporary entity in jazz and beyond, as well as establishing the then-twenty-something Jordan as among the most distinctive and refreshing new voices of the electric guitar.

Key to Jordan's fast-track acclaim was his mastery of a special "tapping" technique on the guitar's fret board instead of conventional strumming and picking. While a handful of other virtuoso players were using similar techniques, Stanley's fluid and melodic use of tapping captured the imagination of listeners via his inherent warmth and sensitivity. He happened upon the technique without any formal study and had been applying it to his already exemplary traditional playing ten years prior to the album. Though Jordan showcased the technique in a variety of musical styles from swing to rock, it was smooth jazz radio support for his singular versions of "The Lady in My Life" (first recorded by Michael Jackson) and the Beatles' "Eleanor Rigby" that sent Magic Touch to the top of Billboard's jazz chart for a stunning 51 weeks. The album became a gold-seller (over 500,000 sold) - outstanding for any jazz or instrumental CD.

Subsequent albums found Jordan caught in a frustrating web of wanting to usher his audience into deeper levels of his artistry while record companies craved more of the stuff that had whisked him to the chart top. Because he debuted on the Blue Note label, he was marketed as a jazz progressive when what he was trying to stress was music beyond stylistic boundaries.

Those projects included a solo guitar project titled Standards Volume 1 (1986) where Stanley made the bold statement that songs by the likes of Stevie Wonder and Joni Mitchell deserved recognition as standards as much as chestnuts like "Georgia On My Mind." He followed that with the band album Flying Home (1988) and an especially edgy album titled Cornucopia (1990), half of which was straight ahead jazz recorded live and the other half of which was multi-dimensional originals recorded in the studio. Still later in 1994 after a move to Arista Records (then-helmed by pop music maverick Clive Davis), he recorded the bracingly eclectic Bolero album, featuring covers of Herbie Hancock's "Chameleon," Jimi Hendrix's "Drifting," his original "Plato's Blues" and the CD's centerpiece, a 17-minute arrangement of Ravel's "Bolero" broken up into rock, African, Latin, "groove" and industrial versions.

After a self-imposed exile from the rat race in the `90s that included a retreat to the mountains of the southwest, Stanley Jordan has re-emerged with a new life's direction. "Most people - if and when they find their calling - come to see themselves in some sort of service capacity," he states. "Right now I feel a strong desire to bring my music to the people not just for entertainment, but also for inspiration and healing."

A primary element of this new direction involves championing Music Therapy, which he is studying in a Masters program at Arizona State University. "Accelerated music schools give lots of good information but not a lot of advice on how to learn and retain that information," he states. "I try to supply this missing element of how to approach it to where you don't strain yourself. Physically, musicians run the risks of problems such as repetitive motion strain that this can help. More importantly, Music Therapy can help creative people with psychological problems such as perfectionism. Normally people approach difficult music, start out not playing it very well then try to increase their ability to play it. My approach is the opposite. I say approach easy music first, do it well then gradually increase the difficulty of the music. That way you have success right from the start. It's a way of slowing down and staying in a comfort zone, enabling you to learn the music faster in the long run while building up your confidence."

The positive affects of this training are not just skills Stanley teaches but skills he has adopted for his own creativity. "With composing, you start writing something and it's great because you get all these ideas. But the minute you stop and analyze it, you have the constraint of writing something that fits what you've already done. Now there's this whole 'judgment' thing going on. What I suggest is to stay in the creative flow for as long as possible, getting as many ideas out as you can. Then come back later with a different head to do the editing and critical side. The 'mental training' for this is not in books. It's closer to meditation or neuro-linguistic programming (NLP) where one is taught to control their mental state to achieve a goal. This can be applied not just to music but to other aspects of your life."

Another area of intensive interest for Jordan is the development of Sonification (turning something into sound) and the concept of using music as a form of representation. "A great percentage of the data that people analyze is time sensitive data," Stanley explains, "and audio is a far superior vehicle for understanding the passage of time. Take the amortization schedule of a 30-year mortgage, for example. If I hit one note per second in the left speaker for interest and another note per second for principle in the right speaker, it would take about six minutes to 'play' that mortgage. A person could hear how long they would be paying interest before they started paying principle. Looking at it on a graph is one thing, but listening to it makes you feel it. Sonification offers deeper understanding of information because more of the brain is involved in understanding that information."

Jordan sees the potential for Sonification applications on a revolutionary level. "Sonification can be of profound benefit to humanity," he continues, "especially when making decisions that affect other people which requires an emotional understanding of what you're doing. For example, you can use Sonification for a person's vital signs. To a degree that's already in place with machines that beep for heart rates, but it's in a primitive stage without much coordination. You get all these pieces of equipment making different sounds. Through Sonification, we can create a universal language that makes it easier for physicians to listen to several monitors' sounds and know what's going on with their patient's body. This is done using principles similar to those of arrangers and sound mix engineers. In arranging music for a number of instruments, you write so that the parts stay out of each other's way, enabling you to hear each part separately."

Where does this leave new recordings in the matrix of Stanley's career? In 2004 he was prominently featured with the Italian group Novocento on their CD, Dreams of Peace. And independently, he has recorded two CDs: Ragas (a collaboration with musicians from India featuring Jay Kishor on sitar) and Relaxing Music in Difficult Situations I, an audio extension of his Music Therapy interests. Beyond those, Stanley is preparing some new CDs that will focus on something he has only shared sporadically: original compositions. However, as with all things related to Stanley Jordan, he will release them when he feels the music and the timing is right.

"There's a belief that when you're a musician, you're supposed to want to be rich and famous," he muses. "I've never been like that. I do want to be paid well for what I do and want people to know about what I do - as big of an audience as I can - but that's a tangent. I see the commercial and artistic as two separate things. Sometimes they can work together. Sometimes they work against each other. I'd rather be musically satisfied and not famous than be famous and not satisfied with my music."

"When I have something new I'm playing that I really like, then I'm most motivated to share it with the world."
Read more on Last.fm. User-contributed text is available under the Creative Commons By-SA License; additional terms may apply. 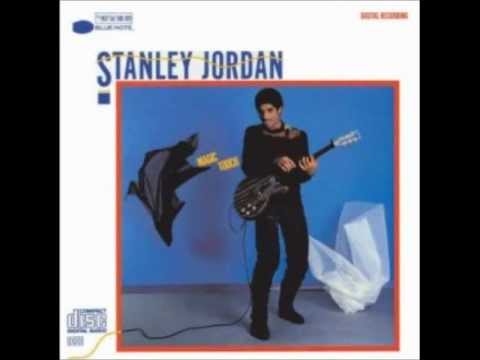 The Lady In My Life