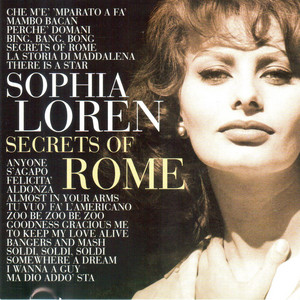 Sophia Loren (born September 20, 1934) is a motion picture and stage, Academy Award-winning actress and former sex symbol, widely considered to be the most popular Italian actress of her time. Early life and career Sophia Loren was born Sofia Villani Scicolone in Rome. Her father Riccardo Scicolone was an engineer and her mother Romilda Villani was an aspiring Neapolitan actress and piano teacher. Loren grew up impoverished in wartime Pozzuoli, near Naples sharing a small flat with her sister M...

Sophia Loren (born September 20, 1934) is a motion picture and stage, Academy Award-winning actress and former sex symbol, widely considered to be the most popular Italian actress of her time.

Early life and career
Sophia Loren was born Sofia Villani Scicolone in Rome. Her father Riccardo Scicolone was an engineer and her mother Romilda Villani was an aspiring Neapolitan actress and piano teacher. Loren grew up impoverished in wartime Pozzuoli, near Naples sharing a small flat with her sister Maria, her grandparents and her uncles and aunts. She has said on many occasions that being born into and living with extreme poverty for most of her childhood gave her a strength of character that allowed her to succeed and appreciate every moment she has been given as a human being. Up until Sophia Loren was about 14, she was considered an ugly duckling. Seemingly overnight, she bloomed into a beautiful woman.

In 1949, at age 15, Loren left for Rome and about a year later began her film career with bit parts in mostly minor Italian films. In 1950 she was among the contestants of the Miss Italia beauty pageant, earning the 2nd place behind the winner Anna Maria Bugliari. In 1951, Loren and her mother worked as extras in Quo Vadis, which was filmed in Rome and provided Loren with an early brush with Hollywood. She also appeared in the title role of the movie Aida (1953), in which the singing of Loren's character was dubbed by opera star Renata Tebaldi, and which caught the eye of Cecil B. DeMille, who once said of Loren that 'You could build mountains around that girl.'

Loren also supported her mother and sister by working as a model in the weekly illustrated romantic fumetti under the name Sofia Villani or Sofia Lazzaro. She also took part in regional beauty contests, where she won several prizes. Loren was discovered by her future husband, the much older and already-married film producer Carlo Ponti, and they wed on September 17, 1957, three days before her 23rd birthday. Their first marriage had to be annulled in order to keep Ponti from being charged with bigamy. The couple remarried on April 9, 1966, but only after Sophia, Ponti, and Ponti's first wife all obtained French citizenship, thus enabling Carlo to divorce his first wife and marry Sophia in France, where, at the time, Catholic doctrines regarding divorce did not prevent legal civil marriage. The couple eventually had two sons together, Carlo Ponti, Jr., and Edoardo Ponti. The couple remained together until Ponti's death on January 9, 2007.

Eventually, Sofia Scicolone changed her name to Sophia Loren (a twist on the name of Swedish actress Marta Toren) and appeared in film roles that emphasized her voluptuous physique, even appearing topless in the films Two Nights with Cleopatra and It's Him, Yes! Yes! (considered acceptable in European cinema at the time, though said scenes were usually cut when the films were distributed in the United Kingdom or in North America). These early films were the only times she would appear nude; she stated that she did not feel comfortable exposed to the camera in the nude, as doing so represented 'a lot of nakedness'. Loren's acting career took off upon meeting Vittorio De Sica and Marcello Mastroianni in 1954. Many feel that her collaborations with De Sica would mark her finest work as an actress. Many of Sophia's Italian films were dubbed by voice-over actors for the English-speaking market. Wisely, Sophia dubbed herself in English to familiarize the international audience with the sound of her voice.

By the late 1950s, Loren's star had begun to rise in Hollywood, with films such as 1957's Boy on a Dolphin and The Pride and the Passion in which she co-starred with Frank Sinatra and Cary Grant. Grant, reportedly, fell so deeply in love with Loren that he ardently proposed marriage, despite her obvious loyalty to Carlo Ponti and Grant's own union with actress and writer Betsy Drake. It is possible that Loren had an affair with Grant but how serious their relationship was is now known only to her. Stargazers and celebrity biographers consider the putative Loren-Grant romance to be one of the more mysterious and elusive romantic involvements in Hollywood history.

International fame
Loren became an international film star with a five-picture contract with Paramount Studios. Among her films at this time: Desire Under the Elms with Anthony Perkins, based upon the Eugene O'Neill play; Houseboat, a romantic comedy co-starring Cary Grant; and George Cukor's Heller in Pink Tights in which she appeared with blonde hair (a wig) for the first time. Loren demonstrated considerable dramatic skills and attracted respect as a dramatic and comedic actress, especially in Italian projects where she could express herself more freely, although she acquired great proficiency in English.

In 1960, her acclaimed performance in Vittorio De Sica's Two Women earned many awards, including the Cannes, Venice and Berlin Film Festivals' best performance prizes. Her performance was also awarded an Academy Award for Best Actress, the first major Academy Award for a non-English-language performance. Initially, the stark, gritty story of a mother and daughter surviving in war-torn Italy was to cast Anna Magnani as Sophia's mother. Negotiations, perhaps due to billing, broke down and the screenplay was rewritten to make Sophia the mother; Eleonora Brown portrayed the daughter.

Belying the typical portrayal of the beautiful actress as vacuous and emptyheaded, Loren was known for her sharp wit and insight. One of her most frequently-quoted sayings is her quip about her famously-voluptuous figure: "Everything you see, I owe to spaghetti."

During the 1960s Loren was one of the most popular actresses in the world, and she continued to make films in both the U.S. and Europe, acting with leading male stars. In 1964, her career reached its zenith when she received $1 million to act in The Fall of the Roman Empire.

Among her best-known films of this period are The Millionairess (1960) with Peter Sellers, Vittorio De Sica’s triptych Ieri, oggi, domani (1963) with Marcello Mastroianni, Peter Ustinov's Lady L (1965) with Paul Newman, the 1966 classic Arabesque with Gregory Peck, and Charlie Chaplin's final film, A Countess from Hong Kong (1967) with Marlon Brando.

Despite the failure of many of her films to generate sales at the box office, she has an impressive roster of credits and work with famous co-stars. Invariably, she has turned in a charming performance and worn some of the most lavish costumes ever created for the movies. Some of her most attractive performances include A Breath of Scandal (1960), Madame Sans-Gêne (1962), Heller in Pink Tights (1960) and More Than A Miracle (1967).

Loren also recorded well over two dozen songs throughout her career, including a best-selling album of comedic songs with Peter Sellers; reportedly, she had to fend off his romantic advances. It was partly owing to Sellers' infatuation with Loren that he split with his first wife, Anne Howe. Loren has made it clear to numerous biographers that Sellers' affections were reciprocated only platonically. This collaboration was covered in The Life and Death of Peter Sellers where actress Sonia Aquino portrayed Loren.

Her struggle to have children was of worldwide interest. Having suffered two very physically and emotionally-painful miscarriages, she was referred to Swiss fertility specialist Dr. Huebert de Watteville. He determined that Loren was deficient in estrogen, and after he prescribed regular injections of the hormone and bed rest for her entire term, Loren became a mother twice. She has proudly stated that the births of her sons meant more to her than anything else she had accomplished in her life.

Once she achieved motherhood, Loren worked less. She moved into her 40's and 50's with roles in films including the last De Sica movie, The Voyage, with Richard Burton and Ettore Scola's A Special Day with Mastroianni.

In 1980, she portrayed herself, as well as her mother, in a made-for-television biopic adaptation of her autobiography. Actresses, Ritza Brown and Chiara Ferrari played Loren at younger ages. She made headlines in 1982 when she served an 18-day prison sentence in Italy on tax evasion charges, a fact that didn't damage her career or popularity.

In her 60s, Loren became selective about choosing her films and ventured into various areas of business, including cook books, eyewear (a perpetual bestseller that can be viewed at www.SophiaLorenEyewear.com), jewelry and perfume. She also made well-received appearances in Robert Altman's Ready to Wear and the 1995 comedy Grumpier Old Men playing a femme fatale opposite Walter Matthau and Jack Lemmon.

It is said that the song Where do you go to (My Lovely) by Peter Sarstedt was inspired by Sophia Loren.

In 1991, Loren received an honorary Academy Award for her contribution to world cinema and was declared "one of the world cinema's treasures".

Current activity
Loren appeared in the 2007 Pirelli Calendar at the age of 72.

She is a huge fan of the football club S.S.C. Napoli and in May 2007, when the team was third in Serie B, she told the Gazzetta dello Sport that she would do a striptease if they achieved promotion to Serie A for the 2007/08 season. “The fans have a total passion, the city deserves promotion.“[1] On June 10, 2007, they did achieve promotion to Serie A. Read more on Last.fm. User-contributed text is available under the Creative Commons By-SA License; additional terms may apply.