OTK are a four-piece Czech alternative rock band. They formed in 1988 in Prague. The band went through a couple of line-up changes during its existence, but most recently, the four bandmembers have been Vít Holub (drums), Honza Žalud (bass), Honza Klempíř (keyboard) and Ondrej Ježek (guitar, vocals, lyrics). Several other musicians contributed on studio recordings. OTK are quite notorious for the long wait (about 5 years) that separates their albums - in their 20 years together, they've only rel...

OTK are a four-piece Czech alternative rock band. They formed in 1988 in Prague. The band went through a couple of line-up changes during its existence, but most recently, the four bandmembers have been Vít Holub (drums), Honza Žalud (bass), Honza Klempíř (keyboard) and Ondrej Ježek (guitar, vocals, lyrics). Several other musicians contributed on studio recordings. OTK are quite notorious for the long wait (about 5 years) that separates their albums - in their 20 years together, they've only released four full-length albums, the last one being 2008's Okolo. Beside that they contributed to numerous compilations (For Semafor, 20after, Dáreček II) and relased 7" split with Aran Epochal, 12" quadsplit SOMOS TU with LYSSA, FAMILEA MIRANDA and PICORE and cooworked as a backing band on two records for UNKILLED WORKER Faithcolapse (Silver Rocket, CD, 2009), Season of Doom (Silver Rocket, LP, 2013)

Be sure to check out OTK's website: http://www.noise.cz/otk and web of their home label Silver Rocket http://silver-rocket.org


Sona a kuva is considered OTK's "breakthrough" album, gaining quite a lot of attention in the czech alternative scene and receiving generally positive reviews, like the one from Splendid Magazine.

"I'm sort of driving blind here. There's next to nothing on the web -- nothing written in English, anyway -- about Czech band OTK, and I don't understand one word of the lyrics. I've determined that they have been around for over five years and are popular in the Czech indie scene, and the blurry snapshot I'm staring at suggests that they have three members; one looks like a cowboy, another like a French mime, and the third is some goateed badass. I've also discerned (all by myself) that Sona A Kuva is really fucking good. OTK's mesmerizing doom-and-gloom sound is also startlingly original. It lulls you with grimy, edgy repetition, then bludgeons you with volatile brutality. Listening to Sona A Kuva is like taking a wrong turn and finding yourself in a seedy, sunless underworld. The haunting, often spoken vocals sound alien to any non Czech-speaking ears, which only adds to the music's nightmarish mood. Although the band's sound is fresh and original, it's possible to detect the influence of other acts. Sona A Kuva projects a vibe of drugged paranoia, which appropriately calls to mind the starkness of Morphine and Codeine. OTK would also fit in well on a bill with the Black Heart Procession or Arab Strap; the depressed spoken-word vocals on "Poslepu Na Ceste" are pure Aidan Moffett. Opener "A.Letec"'s hypnotic, plodding bassline will lull you into a fugue state, while guitar noise and bells are layered in a steady crescendo. However, before the music can build to a predictable frenzy, large chunks of the sound-mix simply drop away -- a disorienting effect that will leave listeners ill at ease. It's a perfect opener for this unpredictable haunted house of a record. There's little that OTK won't try. Two tracks feature turntable scratching, though it is employed with such taste as to avoid nu-metal cartoonishness. "Mezi Prsty" is a minimal exercise in dueling harmonics that opens with what can best be called zombie scat. "Sopka", perhaps the album's finest song, centers on Honza Zalud's languid bass (as many of these tracks do), which slides glumly between two notes with the sickening, sinuous beauty of a strong hangover. Singer Ondrej Jezek does his most gorgeous crooning here, and the jarring squiggles of noise that dot the song's landscape add to its disturbing grandeur. "Pandorina Lednicka" almost concludes the album with a cathartic storm of strained screaming and heavy guitar work, which by song's end have turned into punishing metal riffs; however, "Poslepu Na Ceste", its rhythm sustained by a heartbeat-like thump, is the disc's true ambient comedown. I don't know what OTK have done before, and I (literally) don't know what they're saying now, but I'm aware enough to recognize the from-the-gutter power of this exquisite album. You'd do well to follow suit." 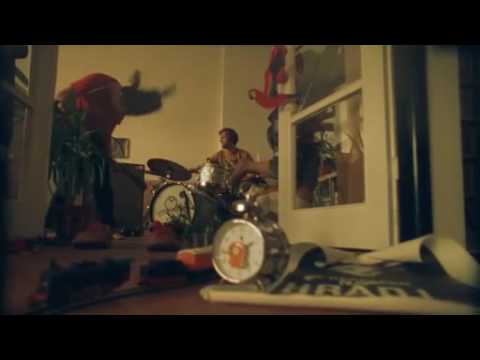