On The Last Day

A noble attribute often ascribed to professional athletes is their ability to play with pain. That certainly applies to the fiery Seattle Hardcore Rock band On The Last Day. Consider this particular road hazard: They were playing in Charleroi, PA this last tour, singer Geoff Walker recalls. And right at the end of Leaving the Citadel bassist Aaron Johnson's headstock and Geoff's face crossed paths. "He hit me and all I remember was thinking, That's gonna bleed." He awoke a minute later to Justin...

A noble attribute often ascribed to professional athletes is their ability to play with pain. That certainly applies to the fiery Seattle Hardcore Rock band On The Last Day. Consider this particular road hazard: They were playing in Charleroi, PA this last tour, singer Geoff Walker recalls. And right at the end of Leaving the Citadel bassist Aaron Johnson's headstock and Geoff's face crossed paths. "He hit me and all I remember was thinking, That's gonna bleed." He awoke a minute later to Justin handing him a towel and a river of blood meandering across the stage from his nose. He had to get a CaT Scan and two X-rays because He had been knocked out. The doctor said he had no broken bones, but some of the cartilage was detached at the bottom of his nose.

Nevertheless, the band played on. They only missed one show two days later, and only because, due to the medication Geoff was on, He had completely lost control of his diabetes and was admitted to yet another ER, this time in critical condition. He played the next few shows looking like I was turning into a werewolf because the swelling was so bad. There were two more clinic visits for swelling and an infection. After about eight days He started looking normal again, although it's still extremely sensitive today.

There's nothing normal about On The Last Day's stunning debut album: Meaning In The Static, where the quintet displays a remarkable ability to create fierce, challenging music. with it. "Every song on the recordis some form of therapy for me", Walker admits. "They aren't always happy because sometimes I need to just get my most terrible thoughts on
paper." That he does in often graphic detail, as the raw passion and pain in his lyrics are reinforced by the slashing guitar work of Justin Johnson and Frank Gross and a non-stop propulsive rhythm section of
bassist Aaron Johnson and drummer Drew Dowell. Together, On The Last Day packs a monumental wallop that will resonate in hearts and minds of hardcore rock fans the world over.

The title song, the first track to assault radio, typifies the band's search for truth through loss and confusion. "We had a concept for the record that got a little lost in the process", Walker explains. This
song is one of the surviving themes; it's about searching blindly for meaning where there maybe isn't any. It's about being terrified of nothingness at the end, and looking for an escape. There's no escape
any of the raw edges in any of the songs, which often details real-life events. Twelve CCs painstakingly details Geoffrey's hospital ordeal with diabetes; Missing Frames (Changover) flashes back to the band's van accident, and A Welcome Haunting recalls the drunk-driving death of two of Geoff's friends when he was 16. "I had a lot of trouble dealing with it for a long time", he asserts. "I had a dream where I was able to talk to them and apologize for what I felt like I could have done to help them. It was therapy. It was a welcome haunting".

It was a welcome happenstance that brought them all together. Dowell and brothers Justin and Aaron Johnson had known each other since grade school, before forming a band in high school. At around the same time they cut the original lead singer loose, Geoff Walker had moved from Vermont to Seattle, looking for a bigger and better music scene. They crossed paths in 2003, and it took only two practices before they knew they should work together. That was the official birth of On The Last Day, although second guitarist Frank Gross joined a year later. The band name came from a song we did close to our inception, Walker notes. "We liked it as a name because, much like our lyrics, it's very ambiguous. It leaves a lot open to interpretation. There are a lot of last days in our lives and they can mean a lot of different things".

Before long, they were veterans on the Seattle club scene, playing shows with the likes of Atreyu and Deftones. But their favorite peers on the local circuit happened to be their oldest friends, fellow Seattle band Aiden. "They were the first band we played with that fit what we were doing",Walker says. "And they felt the same way about us. It seemed that we played every show together for about six months, so when they signed to Victory , we didn't feel jealous at all, we were happy for them".

Aiden's Will Francis tried to return the favor by setting On The Last Day up with
talent scouts from a variety of labels, but as fate would have it, Victory picked them up as well. So it seemed only natural for On The Last Day to use their Aiden connection to find the producer for their debut album. "We actually met Steve Carter through Will", Walker recalls. "He basically put a word in with Steve, gave me his number and we started talking. He is really like a sixth member of our band, with a third-party perspective. He's a very hands-on producer and he pushes us really hard. The guy has a great ear for rock and really just helps us do what we do
better. We couldn't ask for anything more".

Once Hardcore Rock fans get an earful of the passion and the fury of Meaning In the Static, they won't be asking for anything less. Read more on Last.fm. User-contributed text is available under the Creative Commons By-SA License; additional terms may apply. 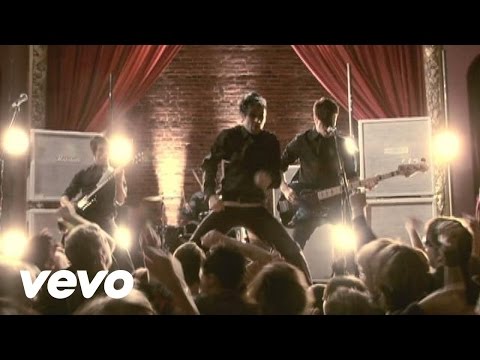 Meaning In The Static