Nicky Hopkins (born Nicholas Christian Hopkins (February 24, 1944, Harlesden, North London – September 6, 1994 in Nashville, Tennessee, U.S.) was an English pianist and organist. Hopkins produced and performed on some of the most important British and American popular music recordings of the 1960s and 1970s, and is widely regarded as one of the most important session musicians in rock history. Biography Nicky Hopkins started his musical career in the early 1960s as the pianist with Screaming...

Nicky Hopkins started his musical career in the early 1960s as the pianist with Screaming Lord Sutch's Savages, which also included Ritchie Blackmore (founder of Deep Purple). He then joined The Cyril Davies All Stars, one of the first British rhythm & blues bands, and played piano on their Country Line Special LP.

He had suffered from Crohn's disease since his youth. Poor health and ongoing surgeries made it difficult for him to tour. This contributed heavily to his occupational preference for studio work.

He began his career as a session musician in London in the early Sixties and quickly became one of the most in-demand players on the thriving session scene there, contributing his fluid and dexterous boogie-woogie influenced piano style to many hit recordings. He worked extensively as a session pianist for leading UK independent producers Shel Talmy and Mickie Most and performed on albums and singles by The Kinks, Donovan, and The Rolling Stones. His performances with The Rolling Stones were among his most memorable, notably on their Sixties albums Between the Buttons, Their Satanic Majesties Request, Beggars Banquet and Let It Bleed. Hopkins also played on Jamming With Edward, an unofficial Stones release that was recorded during the Let It Bleed sessions, while the Stones' Mick Jagger, Bill Wyman and Charlie Watts, with Hopkins and Ry Cooder, supposedly waited for Keith Richards at Keith's Paris flat. The "Edward" of the title was an alias of Nicky Hopkins, derived from his outstanding performance on "Edward, the Mad Shirt Grinder", a song from Quicksilver Messenger Service's Shady Grove LP.

In 1965, he played piano on The Who's debut LP, My Generation. He recorded with most of the top British acts of the Sixties, including The Beatles, The Rolling Stones, The Who and The Kinks, and on solo albums by John Lennon, Jeff Beck, and others. He also helped define the "San Francisco sound", playing on albums by Jefferson Airplane, New Riders of the Purple Sage, and Steve Miller Band. He briefly joined Quicksilver Messenger Service and performed with Jefferson Airplane at the Woodstock Festival.

In 1967 he joined The Jeff Beck Group, formed by former Yardbirds guitarist Jeff Beck, with vocalist Rod Stewart, bassist Ronnie Wood and drummer Micky Waller, playing on their influential LPs Truth and Beck-Ola. In 1968 he also played piano in the swedish psychedelic group The Tages in the single "Halcyon Days", produced in Abbey Road Studio. He was also a member of the short-lived Sweet Thursday line-up in 1969.

Hopkins was added to the Rolling Stones live line-up on the 1971 Good-Bye Britain tour, as well as the notorious 1972 North American Tour and the early 1973 Winter Tour of Australia and New Zealand. Hopkins is featured heavily on the classic 1972 Exile on Main St. album. He started to form his own band around this time, but decided against it after coming off the Stones tour. He had planned on using Prairie Prince on drums, and Pete Sears on bass. Hopkins failed to make the Stones' 1973 tour of Europe due to ill health, and aside from a guest appearance in 1978, he did not play again with the Stones live on stage. Hopkins did manage to go on tour with Jerry Garcia's side project, the Jerry Garcia Band, from August 5 to December 31, 1975. He continued to record with the Stones until 1980, and on solo records of members of the Stones up to 1991.

Hopkins released a solo album in 1973 entitled The Tin Man Was a Dreamer. Other musicians appearing on the album include George Harrison (credited as George O'Hara), Mick Taylor of the Rolling Stones, and Prairie Prince, who was later the drummer for the subversive punk band The Tubes. Re-released on Columbia in 2004, the album is a rare opportunity to hear Hopkins sing.

As a session player, Hopkins was renowned for his ability to give accomplished performances with little or no rehearsal, and for his habit of reading comic books at recording sessions. The classic Kinks song "Session Man" (from Face to Face) is dedicated to (and features) Hopkins. The Kinks' Ray Davies wrote a memorial piece that appeared in the New York Times after Hopkins' death.

A member of the Church of Scientology, he was awarded the International Association of Scientologists (IAS) Freedom Medal in October 1989.

Hopkins died on September 6, 1994, aged 50, in Nashville, Tennessee, of complications from intestinal surgery. At the time of his death he was working on his autobiography with Ray Coleman. He was survived by his wife, Moira. Read more on Last.fm. User-contributed text is available under the Creative Commons By-SA License; additional terms may apply. 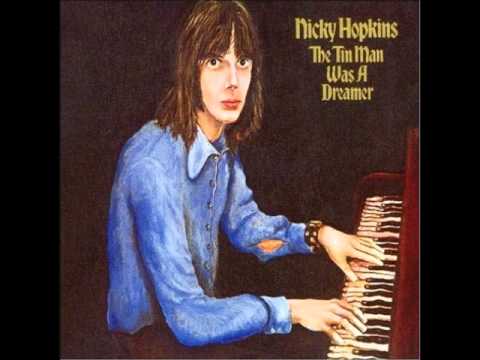 Waiting For The Band