It was one night early in 2006 when husband Adrian Erlandsson on guitar and wife Morrigan Hel began to sing Leadbellys classic ‘Where Did You Sleep Last Night’,from this they formulated the idea to start their own band.

Adrian began his career in a string of bands back in 1981 when inspired by Judas Priest’s Dave Holland he formed the ‘Black Nuns’ who evolved into ‘Berits Polisonger’ playing until 1986.There then followed a series of other bands including Thrash band ‘Penance’ in 1987 until becoming a founding member of ‘At The Gates’ in 1990. During his time with them he was part of the punk band ‘Skitsystem’,recording 3 EP’s between 1995/96.Adrian also had another two bands with ATG connections with ‘Terror’ who cut a 3 track demo and ‘Hyperhug’.In 96 Adrian formed ‘The Haunted’ with fellow ATG brothers Jonas and Anders Bjorler,cutting one demo in 97 and releasing one album in 98.Leaving late in 98 Adrian drummed for Swedish Black Metal purists ‘Nifelheim’ and numerous other bands.
In June 1999 he was approached by Cradle Of Filth and played drums on one track for the ‘Cradle To Enslave’ EP,before becoming a full time member,playing on no less than 20 albums/singles/dvd’s until May 2006 when he joined ‘Needleye’ playing on their album ‘Ode To None’ and some additional demo’s that were available on their Myspace page.

Morrigan is also well known for her Cradle Of Filth connections,appearing on stage with them as well as being the model on the “Enslave Ep”,in the video for Born In A Burial Gown and the Horror Movie Cradle Of Fear.That aside,a career as a fetish model,TV presenter,stage performer and actress in Nature Morte.
Her musical projects date back to her teens when she first learned the guitar & along with a friend played and sang along to Black Sabbath,they formed a band called “The Art Of Falling Apart”.Later She joined the band ‘Obsidian’ (not the Cradle related band who released an album in 2000),the band also recorded a version of ‘Girls Like Honey’ a song later ressurected for Nemhain.

Cherry Forever (Guitar,Backing vocals) began her music career as bassist with all girl group ‘Desolation Angels’ (Not the NWOBHM band from the 80’s).When their drummer dropped out a young lad by the name of Charlie Simpson stepped in, (Fightstar).Cherry also sang backing vocals for Franz Ferdinand on the track ‘L.Wells’ (On the single The Fallen) in April 06 and numerous tracks on the Demented Scum Cats Lp,which was an all star side project LP from Demented Are Go.Cherry then switched from Bass to Guitar and continued to write songs drawing on her numerous influences.When not making music Cherry was also a Model and made an appearance in the film ‘Nature Morte’.

Music had always been part of Lisa’s life since learning to play the tenor horn at school.When she went to university she and some friends “Messed Around” with some comic songs but nothing came of this.Lisa also made a brief appearence in the film 'Nature morte'.

Liv Fast,a lead guitarist completed the line up but was offered a job presenting poker Tv in Las Vegas,which she accepted.

Her replacement was Sam (Hain) Astley, who can play almost any known musical instrument.He is also one half of ‘The Cry & The Chainsaw’, a small independent film company who have made a number of Music Videos (Including ‘Ana’) and Short Films.Aside from the production and filming he contributes to the soundtracks.

After rehersals and writing sessions a small private gig took place at the Dungeon.By August they made their official debut at an all day music festival at the Bar Monsta in Camden.More gigs followed In October as did a recording session in Eastbourne, resulting in the EP called ‘Blood Runs Free’ (named after a song written by Morrigan but not recorded).Cradle released the ‘Thornography’ album and soon after the official announcement was made about Adrian leaving.

The EP was a limited pressing of 1000 copies only.It went on sale at the Bar Monsta gig on 12.11.06,also they shot the promo video for the song ‘Ana’.The year ended with a new years eve gig with King Lizard at the Purple Turtle club in Camden.

In January they played the newly located Intrepid Fox in London wearing cloths designed by ‘Kates clothing’ at a launch party gig.They also recorded a version of Die Die My Darling for the Misfits tribute album. The band minus Sam then set of to LA for the NAMM convention where they secured a deal with Orange Amps,Adrian also announced a busy shedule with sessions for ‘Netherbird’,’Tenet’ with former guitarist Jed Simon (Strapping Young Lad) and joining Mexican band ‘Brujeria’ on their first world tour. When ‘Needleye’ announced that they had taken the band as far as it could go,Duncan Wilkinson and Ray Holoryd began working on some new ideas and demos and formed ’12 Ton Method’ with Adrian acting as session drummer. Two further tracks were cut ,’From The Ashes’ and ‘Dirty Weekend’which is based on the book by Helen Zahavi.This was recorded at fortress studios and was produced by Greg Brimson (Rammstein) and Russ Russell (Dimmu Borgir).

In March ‘Nemhain’ were given the opportunity to support Australian rock band ‘Rose Tattoo’ at the Scala in London.As Adrian was touring with ‘Brujeria’ at the time he asked his friend and fellow session drummer Robin Guy to take his place,Robin has played with Faith No More’and’Bruce Dickinson’.

April began with two gigs in Wales & London at the end of the month Sam left.
Dick Limelight from Sweden was his replacement.He had been with ‘Mugshots’ in 2001, 2004 he joined ‘Mad Dogs N Glory’ and later played bass with glam rock band ‘King Lizard’ and was on their third EP titled ‘Late Night Dynamite’.The new line up made their debut at Camdens Electric Ballroom on 6th of May,followed by their first mini UK Tour.With new songs being introduced into the set,including a cover of Nirvana’s ‘Rape Me’.Also in May Cradle released a live Dvd/Cd set from April 2001,and the song ‘Dirty Weekend’ appeared on a cd given away with Devolution Magazine.

At the end of june the band were due to play the River Town Festival in Prague,the band never made it there as both Dick and Rachel suddenly left due to “Personal reasons”.In july the band had to take stock of the situation and decided to regroup and carry on,first to be contacted was Mick Priestley from glam band ‘Nothing To Lose’ who agreed to help out at an upcoming rehersal,also at the rehersal was model/tv presenter Samara the bassist with ‘Spiders Superstars’.A week later Mick had been replaced with Stevie Lee formerly of glam band ‘Spit Like This’.The new line up made its debut at the Revue bar in SoHo on july 30th and followed this with a tour in Holland.

In November they went to Belgium to record a new ep.Adrian also announced that At The Gates were reforming for a series of one off gigs around the world,Cradle also announced that a special 2 disc version of Thornography is to be released featuring previously unreleased recordings.
After the Hard Rock Hell gig Stevie quit and Samara left.They were replaced with Lakis, guitarist with Area 54 and Love & Bullets.This line up played 2 shows in Los angeles in january 2008.In March they entered a studio in Sweden to record their debut album. Sam Astley returned to the band in December completing the current lineup. Read more on Last.fm. User-contributed text is available under the Creative Commons By-SA License; additional terms may apply. 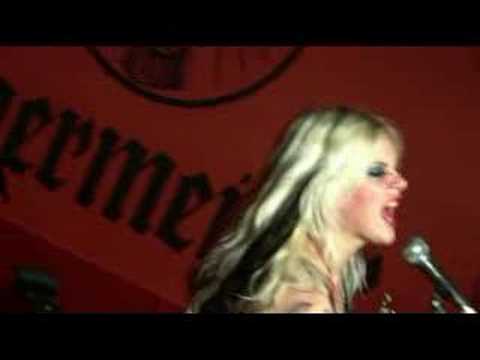