The My Pet Dragon story begins with a young Todd Michaelsen climbing into his old, beat-up Buick headed for New York City with a lyric book and Stratocaster in tow... Todd grew up in upstate New York in a town called Granville, a small mining community on the Vermont border not too far from Saratoga. He grew up listening to his parents rock records of Springsteen, Young, Hendrix, and Dylan, but was also very influenced by 90's alt-rock. He had just quit college to expand his horizons in New Y...

The My Pet Dragon story begins with a young Todd Michaelsen climbing into his old, beat-up Buick headed for New York City with a lyric book and Stratocaster in tow...

Todd grew up in upstate New York in a town called Granville, a small mining community on the Vermont border not too far from Saratoga. He grew up listening to his parents rock records of Springsteen, Young, Hendrix, and Dylan, but was also very influenced by 90's alt-rock. He had just quit college to expand his horizons in New York City's East Village, where he crashed on his uncle's couch for a year. After meeting artists, musicians, and DJ's, he moved to Bushwick, Brooklyn and immersed himself in the burgeoning music scene of Brooklyn. It was there he started playing with future My Pet Dragon drummer Rajeev Maddela. The two bonded over a love of rock music influenced by big, expansive artists such as the Smashing Pumpkins, Radiohead, Sigur Ros, and Bjork.

It was at Raj's loft/rehearsal space that Michaelsen met Reena Shah, an actress and classical Indian dancer from New Jersey. The two became inseparable and quickly moved in together, their blossoming romance punctuated by the harsh reality of living in a cold water flat in a rough neighborhood. A shared love of music and art got them through this stressful period. Their luck changed when they went to Mumbai to visit Reena’s relatives. It was Todd’s first trip to India and he was amazed by the experience. The couple explored Jain temples and saw live music, dance and the martial arts of Kerala. Indian culture was thriving despite intense poverty, just as they had thrived as a couple despite the hardships of their lives back home. After two months in India, Todd proposed to Reena on a beach overlooking the Arabian Sea.

After the inspiring trip, the couple returned to New York and formed My Pet Dragon, named after Todd's imaginary childhood nemesis.
Todd and Reena's journey throughout India heavily influenced Todd’s songwriting—rock fans and DJs, alike, embraced their homemade debut album, First Born. A remixed version of the song “Dragon Breath” was played on BBC Radio and the album and subsequent tour received rave reviews. First Born also caught the ear of acclaimed DJ and producer Karsh Kale, who had Todd write and sing three songs on his 2006 album Broken English and appeared on Breathing Under Water, his 2007 collaboration with Anoushka Shankar. (Todd was also featured on the track 'Phoenix Rising' off of Kale's latest record "Cinema", which debuted at #1 on the iTunes World Music Charts this year). Todd and Reena worked together again on 2009’s award winning animated feature film “Sita Sings the Blues,” with Todd composing the score and original songs, and Reena voicing the title character of Sita.

All of this activity led My Pet Dragon to acclaimed producer Stephen George. George, aka Stevo, was the original drummer in the legendary band Ministry and has recorded and worked with a wide range of musicians including Iggy Pop, The Cars, and Common. Stevo was impressed by First Born and a demo of Todd’s new compositions. He offered to produce and release the next My Pet Dragon record on his newly formed label, Gimme That Sound Productions. Recorded in a barn located in the Catskills, the recordings feature new friends Danny Louis (Gov't Mule), Carlos Anthony Molina (Mercury Rev), Carl Jason Molina (Hurricane Bells, Longwave), Anthony Rizzo (Little Embers, Garden Variety), as well as My Pet Dragon band members Rajeev Maddela, Mario Padron, Vincent Mascolo, and Reena Shah. The recordings were inspired by classic and contemporary artists such as Radiohead, Flaming Lips, Smashing Pumpkins, Beach Boys and Neil Young, but invoke a unique, ethereal sound driven by Todd’s frenetic guitar strum and melodic tenor voice.

Though many tracks on the record find Michaelsen playing all the instruments and performing all of the vocal parts, during the recording of the album, My Pet Dragon blossomed into a full 5 piece rock band who's combination of power, ambience, and passion set them apart right away.
It seems as though Todd has finally found the right musicians he was looking for when he headed to New York City years ago. Maddela's mesmerizing drumming matches the energy of Todd's songs, voice, and guitar playing. Mario Padron's exciting performances and expansive bass playing push the band into new territory, while Vincent Mascolo's beautiful guitar playing and backup singing gives the band its shimmer and ambience. Reena Shah has now started playing keyboards while her singing, dancing, and percussion give the band a unique and soulful
presence. "MPD", as their fans call them, are as excited about the new record "Mountains and Cities" as their audience is.

My Pet Dragon and Gimme That Sound Productions will be releasing "Mountains and Cities" world-wide on August 2nd, 2011. Read more on Last.fm. User-contributed text is available under the Creative Commons By-SA License; additional terms may apply. 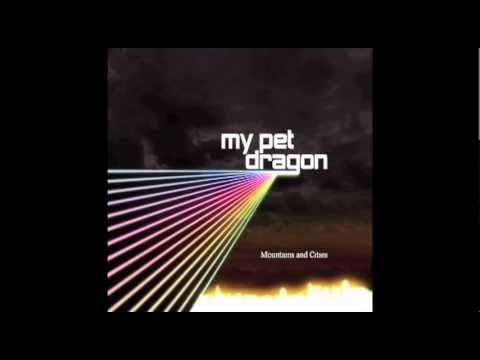