This group was one of the most well known Brumbeat acts of the early 1960s and are also very significant as the members included two of the most famous Birmingham musicians of the 1960's and 70's, namely Roy Wood and Jeff Lynne. Mike Tyler started his music career at a young age by playing piano at a pub in Kings Heath. After entering and winning a local talent contest, he was asked to join Billy King and the Nightriders which he did after changing his stage name to Sheridan. The group attracte...

This group was one of the most well known Brumbeat acts of the early 1960s and are also very significant as the members included two of the most famous Birmingham musicians of the 1960's and 70's, namely Roy Wood and Jeff Lynne.

Mike Tyler started his music career at a young age by playing piano at a pub in Kings Heath. After entering and winning a local talent contest, he was asked to join Billy King and the Nightriders which he did after changing his stage name to Sheridan. The group attracted a large local following and after various personnel changes, Sheridan became the lead singer and frontman. The Nightriders also included lead guitarist Alan 'Big Al' Johnson who was manager of Burton's tailors on Corporation Street and guitarist Dave Pritchard from a group called The Planets. Drummer Roger Spencer who was from Castle Bromwich, had previously played in a group called The Hound Dogs. Bass guitarist at the time was Brian Cope. Mike Sheridan & The Nightriders soon established a reputation around Birmingham as one of the most accomplished bands on the scene at that time.

In June of 1963, Cliff Richard & The Shadows producer Norrie Paramour came up to Birmingham to audition local beat groups at the Moat House Club in the Bull Ring. Of the 13 bands that had been recommended, five including the Nightriders were signed-up by Paramour to the Columbia Records label.

Mike Sheridan & The Nightriders first record release was Tell Me What You're Gonna Do but in late 1963, Brian Cope left the group and was replaced by Greg Masters from Nechells who had played in The Dominators and The G Men. The next single to be recorded by the Nightriders at the famous Abbey Road Studios in London was Please Mr. Postman (recorded on 22nd November 1963 - the same day President Kennedy was assassinated) and although it didn't chart it sold well locally and gained the band much attention. The Nightriders respected lead guitar player, Big Al Johnson, left the band in 1964 after appointing a young successor by the name of Roy Wood.

The first Nightriders single to be recorded with Roy Wood on guitar and backing vocal was What A Sweet Thing That Was/Fabulous released at the end of 1964. In early 1965, Mike Sheridan & The Nightriders, like many British groups in the early 1960's went over to Germany to undertake some bookings. When they returned, another single Here I Stand/Lonely Weekends was released in 1965, and the group's name was changed to become Mike Sheridan's Lot.

On the next Nightriders single Take My Hand, Roy Wood alternated on lead vocal with Mike Sheridan. Make Them Understand was the B-side and is significant by being Roy Wood's first songwriting effort to be published. Although not an exceptional composition, it does feature some excellent guitar work but Mike Sheridan, not Roy Wood sang the vocal on it.

After the release and subsequent failure of the excellent Don't Turn Your Back On Me single in early 1966 (a song written by American composer Jackie De Shannon and recorded with future Pink Floyd producer Norman Smith), Roy Wood left the band to become a founding member of Birmingham's hit group The Move. His place was taken by Johnny Mann from Carl Wayne & The Vikings and Mike Sheridan carried on as the frontman for a short time before also leaving.

With Mike Sheridan's departure, the group's name was abbreviated to The Nightriders although Johnny Mann decided to leave soon after and a young guitarist named Jeff Lynne who lived in Shard End, joined the band in response to an advertisement in the local paper. Lynne's first group was called The Andicaps and he had also previously been a member of The Chads (originally known as The Sundowners). After the release of a final Nightriders single, the band was re-named The Idle Race and a change in musical direction followed.

Mike Sheridan continued to perform around the Midlands for a while as Mike Sheridan's New Lot with a line-up of his consisting of Joe Dignam on drums, guitarists Pete Oliver, Terry Wallace and Colin Timmins on bass guitar. They released a single in 1966 and Mike Sheridan later joined up with The Move's bass player Rick Price to form the group Sheridan & Price with whom he also recorded an album. Mike Sheridan retired from music in the early 70's to start a successful business selling potatoes. In the 1980's he returned with a new Nightriders band playing 1960's style music and he's still a well known and much respected performer in the Birmingham area along with his wife Suzi Sheridan. 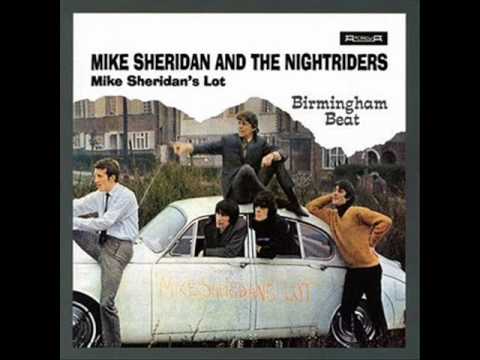