Jennifer Marcella Peña (born September 17, 1983 in San Antonio, Texas), is an American Latin Pop/Tejano singer and actress who has sold over 3.5 million records internationally. Peña is the third and youngest daughter of Jaime and Mary Peña with other siblings Janet and Jackie. Peña is of Mexican descent native to the state of Texas raised in Corpus Christi, Texas. Los Jetz Peña first achieved notoriety after performing at the Astrodome in Houston, Texas during a Selena tribute concert in 1995...

Jennifer Marcella Peña (born September 17, 1983 in San Antonio, Texas), is an American Latin Pop/Tejano singer and actress who has sold over 3.5 million records internationally. Peña is the third and youngest daughter of Jaime and Mary Peña with other siblings Janet and Jackie. Peña is of Mexican descent native to the state of Texas raised in Corpus Christi, Texas.

Los Jetz
Peña first achieved notoriety after performing at the Astrodome in Houston, Texas during a Selena tribute concert in 1995 while under management with Q Productions and Abraham Quintanilla II, who was Selena's father and former manager. This was Peña's first public performance on a grand scale performing Bidi Bidi Bom Bom, a #1 song for the late Latin superstar Selena. Peña's first studio album Dulzura released in May 1996 as part of Jennifer y Los Jetz was produced by Abraham Quintanilla III and introduced her to the music scene officially at the age of 12 with the title track and "Ven a mí" (a Spanish-language cover of The Drifters' "Dance with Me") garnered her a loyal fanbase. The album sold quite well in the Latin market, certified gold and winning several Tejano Music Awards. At the time Tejano Music was in its prime and Jennifer was another staple act in the scene. Her introduction was both praised and criticized mainly in part due the artistic similarities between Selena and she. The comparisons came and went, but Jennifer managed to continue winning over fans. The year 1997 saw the release of her second album, Jennifer Y Los Jetz , with the singles "Tu Castigo" and "Yo Te Vi," being promoted and drawing the same level of success Dulzura had achieved winning another gold certification.

In 1998, she released Mariposa with "Tengo Miedo" as the lead single, another hit in the Latin market, and in Mexico where she toured extensively, the album became Jennifer's third album to be certified gold. By 2000 Jennifer was the most prominent female Tejano singer for which had been long dubbed La Princesa De La Musica Tejano ( The Princess Of Tejano Music) her most commercially and critically acclaimed album while under Q's management was 2000's Abrázame y Bésame, for which Jennifer was now billed as a solo act but still with band Los Jetz the album was produced by Abraham Quintanilla III. Showcasing a more mature sound for Peña, the title track, a duet with former Kumbia Kings frontman DJ Kane, was the most successful single. Other hits - "Si Tú Te Vas," "Contigo Otra Vez," and "No Te Voy a Perdonar" - hit strong again in the USA and in Mexico, garnering her a 2001 Grammy nomination and multiple Tejano Music Awards. Jennifer continued to promote and tour extensively after the release of every album under Q's management and with Label EMI-Latin.

Univision Music Group and Latin Pop Venture
After a few years of management under Q Productions, Peña opted to further her career by signing with the then new label Univision Music Group, whose president had launched Selena's career while at EMI Latin, which he headed until 2000. Under UMG, Peña was billed as a Latin pop artist. In 2002, she released Libre, produced by Rudy Perez and Kike Santander. Rudy Perez wrote the album's biggest hits: "Vamos al Mundial," which was chosen as the anthem for the 2002 FIFA World Cup, and "El Dolor de Tu Presencia," which catapulted Peña's popularity, spending eight consecutive weeks at #1 on Billboard's Hot Latin Tracks. "Entre el Delirio y la Locura" soon followed. Libre sold over 300,000 units. In 2003 Libre was nominated for a Grammy and earned her a Premio Lo Nuestro. The year 2004 saw the release of her second album with UMG, Seducción, which was produced by Rudy Pérez,Gustavo and Kike Santander, and Emilio Estefan — Rudy Perez was the genius behind another #1 hit "Vivo y muero en tu piel" — the album kept up the momentum of her previous release, again selling over 300,000 units which offered a wider appeal to Jennifer's music by offering some alternate takes on tejano/pop and even a country flavored Para Olvidarerte De Mi. In 2004 Peña performed to a crowd of over 61,000 at the Houston Livestock Show and Rodeo, a venue that has hosted the Dixie Chicks, Garth Brooks and Beyoncé, and also recording a live album that was released later that same year. Following her commercial success, Peña has performed for President George W. Bush and is actively involved with youth programs against substance abuse.

Peña has also ventured into film, appearing in MTV's All You've Got with Ciara in 2006 and Amexicano in 2007 which was released at the Tribeca Film Festival is awaiting a release date.

On February 27, 2007, Dicen que el tiempo was released which debuted at #16 on Billboard Top Latin Album, with "Como Entender" being promoted as the first single, followed by "Tuya" in late April. Since the release both the album and single has garnered lukewarm reception cracking the Top 25 positions on Billboard and selling out the initial shipment of 80,000 units. Jennifer is on hiatus after promoting the album all across the US and Puerto Rico with TV slots on MTV Tr3s as the artist of the month and extensive radio promotion. The second single "Tuya", reached its peak position at #5 on Billboard charts as of September 2007." Dicen Que El Tiempo" did not fare well in sales in comparison to previous efforts but won Jennifer critical acclaim and was well received by fans the album although a departure from both her Pop Ballads and Tejano Sound was produced by Jennifer and Sebastian Kyrs and also included additional songwriting and production by Obie Bermudez. On December '06, 2007 "Dicen Que El Tiempo" was nominated for a Grammy.

In April 2007, Peña announced on her official message board that she was engaged to Puerto Rican singer-songwriter Obie Bermudez, and that they were expecting their first child. They shared their good news again during an appearance on the April 26, 2007, edition of "Mi TRL" on MTV Tr3s. The couple was married in a private ceremony in her home state of Texas on June 3, 2007.[1] The couple welcomed their first child, son Jobien, on November 6, 2007. The baby was a week late.[2] Currently Peña resides in Texas along with her husband. After the merger of Univision into Universal Latin Music, Peña's next album was in the works but after various attempts she is no longer on the roster with Universal Latin Music.

Currently Jennifer is not recording any music is now part of GLO organization . Read more on Last.fm. User-contributed text is available under the Creative Commons By-SA License; additional terms may apply. 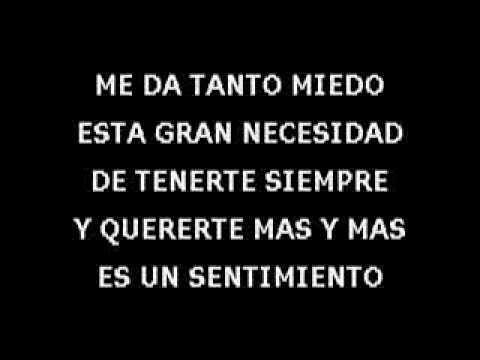