George Morel is an accomplished and evolutionary DJ/Producer, and is considered a pioneer in the dance music world. Infused with electronic and echoes of self expression, his music is in constant progression. For Morel, versatility has become a tradition. Never tied to just one sound, he has a deep appreciation for music that fills the room and moves the soul. Morel's journey began as a young thirteen year old curious about electronic music and sounds, who began by experimenting with vinyl and t...

George Morel is an accomplished and evolutionary DJ/Producer, and is considered a pioneer in the dance music world. Infused with electronic and echoes of self expression, his music is in constant progression. For Morel, versatility has become a tradition. Never tied to just one sound, he has a deep appreciation for music that fills the room and moves the soul.
Morel's journey began as a young thirteen year old curious about electronic music and sounds, who began by experimenting with vinyl and turntables. By his late teens he fine-tuned his skills while playing regularly at parties in his New York neighborhood. Little did he know that all of this would lead up to hit singles and worldwide recognition.
By the early 90's Morel landed his first production session, working with David Cole of C&C Music Factory on a track entitled "Our Love (It's Over)" featuring vocalist Dee Holloway. The track was an instant hit in the New York club scene, catapulting Morel's DJ career. He became a regular guest DJ at some of New York's most popular venues such as Red Zone, Palladium, The World, Traxs and Save The Robots. Soon after his first release, Morel wowed the dance world with the production of the infectious hit "Wiggle It" for 2 In A Room. The single spent two weeks at the top of Billboard’s Hot Dance Music/Club Play Chart, eventually going Gold. It made the top three pop charts in the UK, opening up Europe as a fan base for Morel. Other projects during that time included edit arrangements with C&C Music Factory on “Things That Make You Go Umm”, “Emotions” for Mariah Carey, “Let The Beat Hit Them” by Lisa Lisa and The Cult Jam in which he was awarded one Platinum and three Gold Records.
What seemed like his magic touch extended to the success of the burgeoning Strictly Rhythm dance label where Morel was Vice President of A & R. His hard work paid off for the label, which celebrated with massive worldwide label recognition, and one Gold and Platinum records and Billboard Music Awards during his seven years tenure (1991-1998). In 1995 Morel started his own label, Groove On Records. It became an overnight success, with every major DJ talking about the label. Ultimately, Groove On became Morel's production platform, along with other notable DJs from around the world.
Production-wise, Morel was busy creating and releasing his own style of sound, giving birth to Morel's Groove volumes, a series of deep and seductive singles, which even now he continues to produce. With Morel's Groove, he has scored countless hits including Sir James “Special”(1990), Ce Ce Rogers “No Love Lost”(1993), M & M (Morel & Morillo) So Deep So Good (1994), "Let's Groove" (1995),"I Can't Get Enough"(2005), "Sex Girl" (2006), Let's Take Drugs" (2008), "Make It Clap" (2009), Mendo Re-Edit “Do It”(2009), and "Let's Groove Again" (2010) to name a few.
Meanwhile, Morel never stopped spinning. His global fan base grew, shifting his attention to Europe, Asia and South America. He held headline residencies in nightclubs such as Privilege (Ibiza), Cocoon Club (Germany), The Mad (Switzerland) and many more. He also appeared as a guest DJ in some of the top clubs such as Pacha (Ibiza), Amnesia (Ibiza), El Divino (Ibiza), Space (Ibiza), Tribehouse (Germany), Ministry Of Sound (U.K.) Peter Pan (Italy), Queen (Paris), Yellow (Japan), Club Seven (Bahrain) and the legendary Tresor (Berlin) to name a few. On the tours front, he participated in several DJ tours and festivals worldwide including the B-Live tour for Bacardi, the MTV DJ Tour, the Ministry of Sound in Germany Tour, he also participated in the Camel Air Rave which was on a chartered plane from Germany to Greece, making Morel the first DJ ever to play during flight.
Morel participated in most major events, from Rock In Rio (Brazil), Street Parade (Switzerland), City Parade (Belgium), Summer Spirit, Nature One and Blue Parade (all in Germany), and eleven consecutive years at the infamous Love Parade in Berlin.
Morel has appeared on various television programs, radio shows, magazines, books, and has been talked about in the BBC's "Radio 1" show. He also served as a panelist-judge for the Grammy remix category for five years in a row (2004-2008), and currently has several regular monthly guest appearances on radio shows around the world.
Having experienced so many venues, cultures and music around the world, Morel's sound has inevitably evolved with time. Listening to his tracks throughout the years you can hear how each single is distinct but holds a timeless groove. Part of this evolution is now expressed through his underground Tech House, Groovy Minimal, Deep House Groove tracks, which he releases under the George Morel & Morel’s Groove name. He also plans to release big-room bangers which are sure to excite clubbers around the globe.
Morel has come a long way since his first days of spinning on vinyl. His passion for reinvention and keen ear for new sounds are continuously demonstrated through his DJ sets and that distinctive George Morel groove. What's more, Morel's evolutionary spirit is seen through his company Groove On Productions. Look for new releases at www.georgemorel.com or www.grooveon-music.com.
Read more on Last.fm. User-contributed text is available under the Creative Commons By-SA License; additional terms may apply. 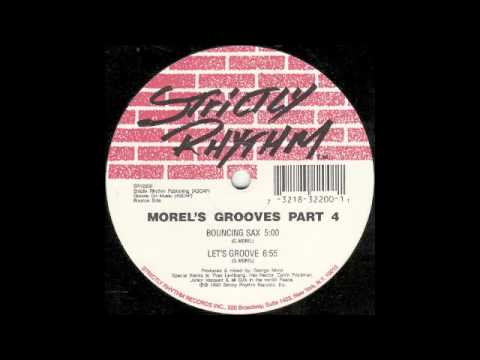