George Hege Hamilton IV (July 19, 1937 – September 17, 2014) was an American country musician. He began performing in the late 1950s as a teen idol, later switching to country music in the early 1960s. Hamilton was born in Winston-Salem, North Carolina, on July 19, 1937. While a 19-year-old student at the University of North Carolina at Chapel Hill, Hamilton recorded "A Rose and a Baby Ruth" for a Chapel Hill record label, Colonial Records. The song, written by John D. Loudermilk, climbed to No...

Hamilton was born in Winston-Salem, North Carolina, on July 19, 1937. While a 19-year-old student at the University of North Carolina at Chapel Hill, Hamilton recorded "A Rose and a Baby Ruth" for a Chapel Hill record label, Colonial Records. The song, written by John D. Loudermilk, climbed to No. 6 on the United States Billboard Hot 100 chart. By 1960, "A Rose and a Baby Ruth" had attained gold record status for ABC-Paramount (which had acquired the song from Colonial). The self-penned B-side of the record, "If You Don't Know", revealed Hamilton's ambitions to be a rockabilly-country singer. In late 1959, Hamilton moved his family to Nashville, Tennessee to further his work as a country musician. On February 8, 1960, Hamilton officially became a member of the Grand Ole Opry. Later that same year, he began recording for RCA Records, having been signed by Chet Atkins. In the UK he was less successful, with his biggest hit being "I Know Where I'm Going" in 1958. In 1984 he appeared with Billy Graham on his UK tour 'Mission England' and made other appearances as a solo performer in venues around the UK at this time.

Hamilton's breakthrough hit was the 1961 song "Before this Day Ends". His biggest hit came two years later with "Abilene", another song penned by Loudermilk and Bob Gibson. The song spent four weeks at No. 1 on Billboard's country singles chart and reached the Top 20 of the Hot 100. The success of "Abilene" was followed with the song "Fort Worth, Dallas or Houston" (a Top 5 hit in late 1964).

By the mid-1960s, Hamilton's music began showing a decidedly folk influence. This was especially evident with 1966's "Steel Rail Blues" and "Early Morning Rain" (both by Gordon Lightfoot), and 1967's "Urge for Going" by Joni Mitchell. Another 1967 hit was "Break My Mind" (by John D. Loudermilk). One more Hamilton song of this genre was a moderate hit in 1969—the Ray Griff-penned "Canadian Pacific". His last Top 5 single came in 1970, with "She's a Little Bit Country".

After his American chart success declined in the early 1970s, Hamilton began touring the world, across the Soviet Union, Poland, Australia, the Middle East and East Asia. These widely acclaimed international performances earned Hamilton the nickname The International Ambassador of Country Music. He also hosted several successful television programs in the UK and Canada during the 1970s, and in the 1990s he played himself in the West End musical Patsy, based on the life of Patsy Cline.

In 2004, he recorded an acoustic gospel album with producer Dave Moody titled On a Blue Ridge Sunday which earned Hamilton a Dove Award nomination in the "Best Bluegrass Album of the Year" category by the members of the Gospel Music Association. A single from the album, "Little Mountain Church House", won nominee recognition in the "Best Bluegrass Recorded Song" category the following year.

Until the very late years of his life, Hamilton was a regular at the Grand Ole Opry in Nashville and in country shows throughout the U.S. and the UK. He mainly concentrated on gospel tours both at home and abroad. In 2007 he collaborated with Live Issue, a group from Northern Ireland, to record a live album based on the life of Joseph Scriven, who wrote the hymn "What a Friend We Have in Jesus". The two also toured together again in 2009.

In 2008, Hamilton released a parody of his classic hit "Abilene" in the height of the soaring U.S. gas prices called "Gasoline". The acoustic single featured "The Oil Spots" (a.k.a. The Moody Brothers & George Hamilton V) and became a hit with audiences during Hamilton's Opry appearances. Hamilton was also a regular participant in the Country's Family Reunion video series.

Hamilton was inducted into the North Carolina Music Hall of Fame in 2010.

The North Carolina Board of Transportation voted to name a bridge on Business 40 for Hamilton. The ceremony naming the bridge was held on July 19, 2016, which would have been Hamilton's 79th birthday.

It has been suggested that this section be split out into another article titled George Hamilton discography. (Discuss) (August 2016)
Albums
YearAlbumChart PositionsLabel U.S. Country U.S.
1958On Campus——ABC-Paramount
Sing Me a Sad Song——
1961To You and Yours——RCA Victor
1963Abilene1877
1964Fort Worth, Dallas or Houston——
1965Mister Sincerity...A Tribute to Ernest Tubb19—
1966Coast-Country21—
Steel Rail Blues3—
1967Folk Country Classics3—
Folksy21—
1968The Gentle Country Sound of George Hamilton IV25—
In the 4th Dimension36—
1969Canadian Pacific——
1970The Best Of——
Back Where It's At——
1971North Country45—
West Texas Highway——
1972Country Music in My Soul——
Travelin' Light——
International Ambassador——
1973Out West Country——
1974The Best Of Volume 2 (UK only)——
"Greatest Hits"35—
1975Trendsetter——
Back to Down East Country——
1976Back Home at the Opry——
1977Fine Lace and Homespun Cloth——Anchor
1978Feels Like a Million——
1979Forever Young——MCA
1982Songs for a Winter's Night——Ronco
1983Country Beat——Supraphon
1984Music Man's Dream——Range
1985George Hamilton IV——MCA
1986American Country Gothic with The Moody Brothers——Lamon Records
1990HomeGrown with George Hamilton V——Lamon Records
2004Blue Ridge Sunday——Lamon Records
2006Heritage and Legacy——Lamon Records
2010Old Fashioned Hymns and Gospel Songs for Those Who Miss Them——Lamon Records (US) and Hillcrest Recordings (Ireland)
2011In The Heart Of Texas——Heart Of Texas Records
2012Luke The Drifter (The Other Side of Hank Williams)——Lamon Records
Read more on Last.fm. User-contributed text is available under the Creative Commons By-SA License; additional terms may apply. 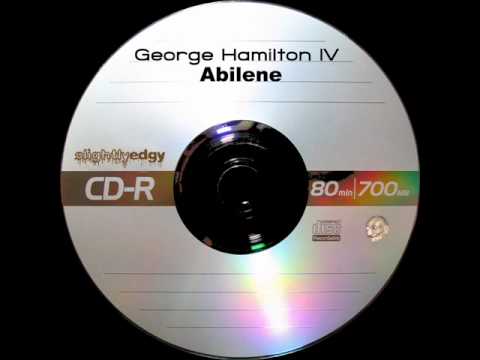 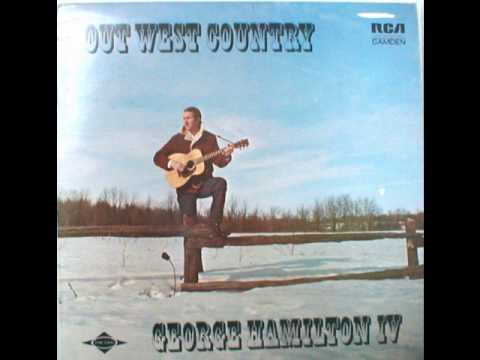 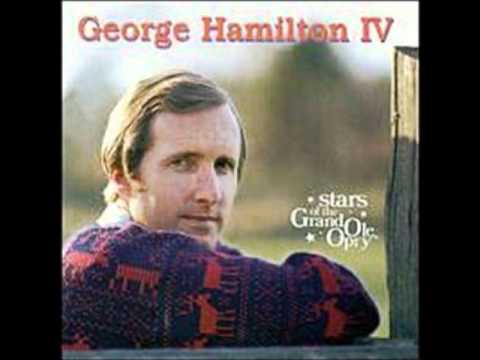 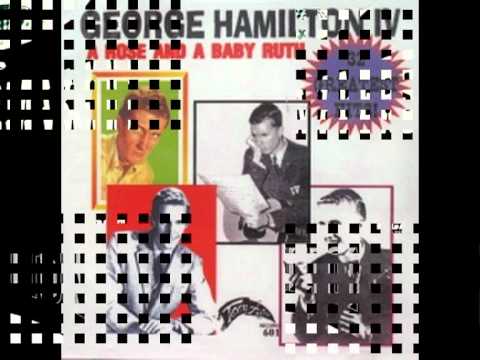 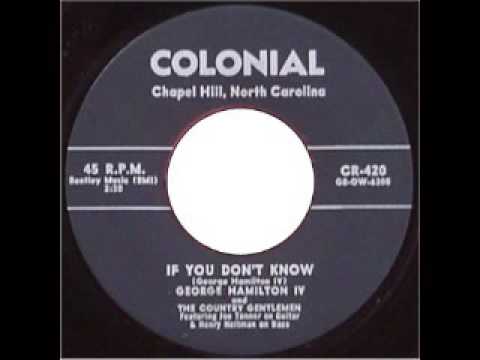 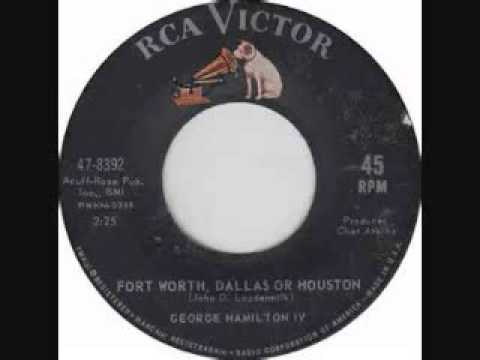 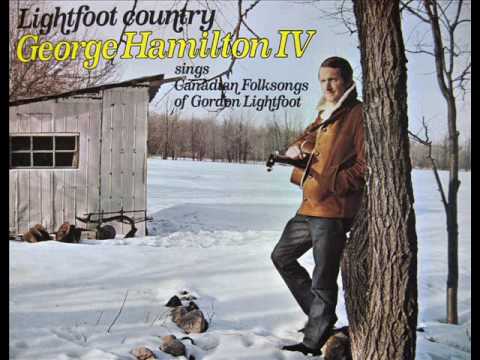 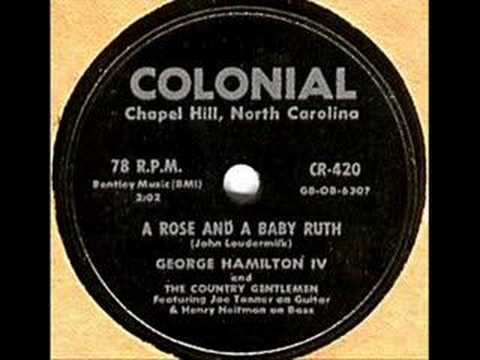 George Hamilton IV - A Rose and a Baby Ruth 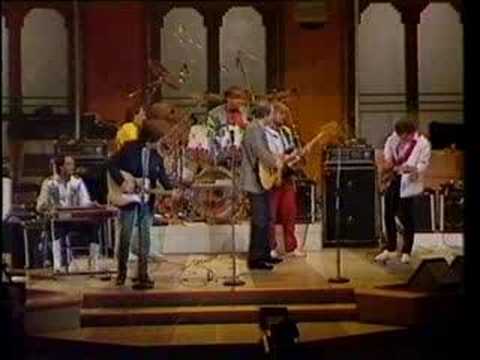 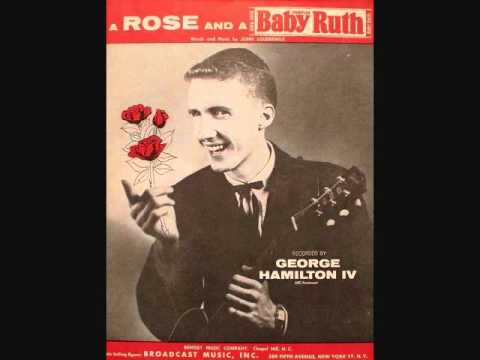