Fruteland is one of the few Americans dedicated to performing and preserving acoustic blues in its various styles (traditional or contemporary). From field hollers and work songs to Delta and Piedmont styles. Fruteland is a singer/songwriter and educator who performs at blues festivals, cultural centers and clubs worldwide. His songs range from blues ballads to folk and gospel standards and what he refers to as "Baby-Boomer" blues. Many of his original works combine contemporary themes played in...

Fruteland is one of the few Americans dedicated to performing and preserving acoustic blues in its various styles (traditional or contemporary). From field hollers and work songs to Delta and Piedmont styles. Fruteland is a singer/songwriter and educator who performs at blues festivals, cultural centers and clubs worldwide. His songs range from blues ballads to folk and gospel standards and what he refers to as "Baby-Boomer" blues. Many of his original works combine contemporary themes played in the spirit of early blues musicians in the classic styles. Fruteland calls himself a blues activist and oral historian promoting awareness through education by conducting Blues in the Schools programs. "Mr. Fruteland," as he is known by students range from the exceptional to the emotionally challenged and the high risk students as well as the economically depressed areas who have participated in his Bluz in the Hood program and another called Trading Handguns for Harmonicas.

Fruteland Jackson was born June 9,1953, in Sunflower County, Mississippi, the fourth child of six. He was reared in a musical and church going family. His maternal grandparents, Willie and Anna Bradley are founders of a church in Doddsville, MS., the New Jericho M. B. Church, and both living testimonies to the family’s oral traditions that date back to Slavery. His grandmother predicted, "This gran’son is gon’ be a preacha’ and save souls". Fruitland's work with young people in schools is making his grandmother’s predictions ring with truth. Unlike many other African-Americans he is fortunate to be able to document his roots back to 1863. Old Jericho MB Church where Fruteland was baptized in 1965 was founded before Emancipation and no longer stands in the town of Doddsville.

Fruteland’s paternal grandfather was a prominent Baptist minister, the Rev. R. L. Chandler of Inverness, Mississippi. Fifty years after the establishment of his first church, it still held five of its original members. The elder Chandler lived to be 96 years old and has a public park and a street named in his honor, located in Indianola and Inverness, MS. He was laid to rest in 1982. Fruteland’s parents John Andrew and Ida B. (both deceased) were like many other blacks living in the south in the early 1950’s. They headed north to Chicago in search of better employment, civil rights and education for their growing family. His father rose to become a staff sergeant, before being honorably discharged after WWII. His father was determined not to be a farmer and welcomed the bright lights and big city of Chicago, IL. He retired as a insurance underwriter with North Carolina Mutual Insurance Company (the world’s oldest and largest African-American life insurance company) His mother attended Alcorn A&M and became a licensed nurse at Chicago’s Cook County Hospital. His early childhood was spent between Chicago and Mississippi. Fruitland's "love/hate" relationship with Mississippi would cause him to return to the Magnolia State time and time again for growth and refuge.

Fruitland's early exposure to church singing and growing up in a household where blues music was the norm set the foundation for what would become his life’s work. Fruteland fell under the spell of the musical influences of his "favorite" Uncle Woodrow "Dick" Chandler. He was a locally known guitar and piano player in Inverness, Mississippi and he gave Fruteland his first guitar at 12 years old. "I broke the guitar’s neck and tried to repair it with 3 inch nails." The impact of these early influences did not become apparent until Fruteland returned to Mississippi.

Fruteland extended his guitar training by learning folk songs and listening to the Motown sounds. "Back then I liked the blues alright but I did not become consumed until later." His formal musical training, however, began in high school where he played the bugle and trombone in the school band and learned music theory. He later attended Columbia College as performing arts major (theatre and music) and Roosevelt University in Chicago where he studied voice. Marriage would later put the arts in the background, when he became a father. He worked as a licensed Private Investigator and later an investigator with the State of Illinois Department of Human Rights.

The first concrete symptoms of his blues calling surfaced in the mid- eighties when he returned to Mississippi this time settling in Biloxi, he opened a wholesale seafood company specializing in high quality shrimp and oysters. At about this juncture in his life, Fruteland began strumming blues rhythms and listening to the Blues Doctor, Bill Ferris out of the University of Mississippi. His business the Camel Seafood Company would, after four years, become a casualty to hurricane Elena. With this hurricane, came the blues. "The blues was a comforter for me always my healer during difficult times." Nearly stranded on the Gulf Coast with family he did what it took to survive while imbibing daily on blues music. "I dug up old records. My fathers old seventy eight’s." He began to reclaim his past, putting names with faces. He began to immerse himself in blues music. From the wail of field-hollers to B. B. King Fruteland was rediscovering what he knew as a child. The music spoke loudly, and this time Fruteland was listening. He was moved and shaken. "My father, grandfather and uncles all had the blues and brought them home daily... it wasn’t no festival either." Fruteland had heard Robert Johnson, Howling Wolf and his guru Johnny Shines, Little Walter, Muddy Waters and his uncle Woodrow, but now, for the first time he was listening.

His grandmother’s prophecy was now undergoing contractions. The "crossroads would beckon" "I thought of my uncle". For the first time in forty years Fruteland figured out where he was suppose to be and doing what he was suppose to be doing. He had found his pulpit to champion the downtrodden and those who dare to listen through blues education. He would assert himself. He now could communicate with peers and oppressors. "The blues is the recognition of a tragedy and an optimism to deal with it." 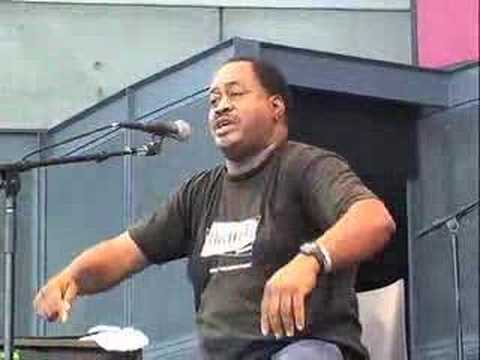