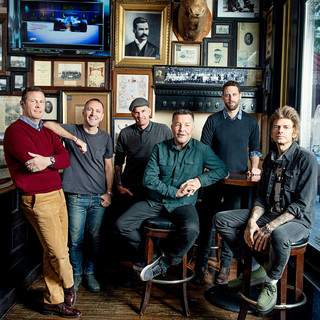 There are several artists named Drop: 1. Drop: Russ Stevens (vocals); Patrick Davey, Jimmy Haboush (guitar); Andy Smith (bass guitar); Jamie Little (drums). Evolution. Survival of the fittest. Call it what you will, but there are often concrete reasons why some bands make it and some bands don’t. The best rock bands make memorable, compelling music, put on live shows that leave their fans speechless, and handle their business like it matters. Chicago’s DROP is one of those bands. Already an ex...

There are several artists named Drop:

Evolution. Survival of the fittest. Call it what you will, but there are often concrete reasons why some bands make it and some bands don’t. The best rock bands make memorable, compelling music, put on live shows that leave their fans speechless, and handle their business like it matters. Chicago’s DROP is one of those bands. Already an experienced outfit, the band is a familiar presence on the Midwest rock and metal scene and has proved to be a consistent draw and a merchandising machine. They have played hometown venues including the Riviera Theater, Double Door, and House of Blues, as well as bigger dates at Summerfest in Milwaukee, WI, Van’s Warped Tour, and Lollapalooza. They have shared stages with rock heavyweights like Iron Maiden, Queensryche, 311, Audioslave, Motorhead, Nickelback, and Jerry Cantrell of Alice In Chains. Their last CD, “Suckerpunch,” was released nationally on Dark Star Records in May of 2004 and has garnered sales and airplay coast-to-coast, hitting ..43 with a bullet on the FMQB National Radio Charts. The band has also received great press in some of the best-selling rock magazines in the country, including Revolver, Hit Parader, and Metal Edge, as well as local write-ups in the Chicago Sun-Times, Chicago Tribune, and Illinois Entertainer.

DROP has certainly accomplished a lot as a band, but the group feels that their best is still on the horizon. They are writing and recording music for what is to be their fourth CD release to date, tentatively titled “One Nation Underground.” This will be the bands’ first effort with new vocalist Ian Serrano, who is a frontman in the Chris Cornell/Ian Ashbury mold. Serrano brings a strong melodic sensibility to the group as well as the guttural rock and roll vocals that every band needs. The rest of the group (guitarists Pat Davey and Jimmy Haboush, bassist Andy Smith, and drummer John DiPentino) are confident that Serrano is the right choice to lead the band onstage and are looking forward to touring and recording with him in the fold.

Together, the members of DROP are working to forge a new sonic identity, one that maintains their blue-collar, working-mans’ hard rock sound but is still unique and energetic. They have a loyal fan base, the “Drop Nation,” that lives for their intense and visually stimulating live shows that tend to boil over whether the group is playing for five or 5000. Comparisons to Sound Garden and Black Sabbath have been made, but, like any great band, DROP is not so easily defined. They are a true hard rock fans’ band, with a musical scope running from the modern to the classic and back again and the staying power to make the dream come true. The band is fully prepared to keep touring and selling out shows wherever they go because their kind of music has always sold and will always sell because it speaks directly to the man in the street, the type of guy the members of DROP still are underneath it all. The band now stands, eyes wide open and amps up loud, on the verge of the best music of their career. They are ready to take on all comers and prove to fans old and new alike that they are here, alive, and full of platinum potential.

3. Drop were a post punk band from Middlesbrough, England formed in 1978 and splitting in 1979, who achieved a certain cult impact beyond their short life. The line up was Richard Sanderson - guitar/vocals, Neil Jones - keyboards, Chris Oberon - bass, Andy Kiss - drums. They were championed by Julian Cope who described Sanderson as a "post-punk Peter Hammill". Some original material may be appearing on the "Messthetics Greatest Hiss Vol 2" CD, whilst original recordings have been made available on Sanderson's blog. The band have recently reformed with the rhythm section of Lost Robots to play their 1979 repertoire as support to Subway Sect. Sanderson left the original Drop to join tick tick and later pursued an interest in experimental and freely improvised music.

4. Drop were a short lived Shoegaze band from the UK. Active mostly in the early 90's. One of the many obscure UK shoegaze bands during that era. Drop released the Ambience 12", Reflections 12"/CDEP, and their final LP Within and Beyond. All three albums being released on Chapter 22 records in 1991.

5. Thomas "Drop" Betrisey- Guitarist/Programmer for Industrial Metal outfit Sybreed from Geneva, Switzerland. (correct tag: http://www.last.fm/music/Drop+RMX) Has many remixes for artists such as Celldweller, Soilwork, and his own band Sybreed. most noted with his work on social remix site http://www.fixtonline.com/. recent song releases include Switchback (Drop's Wave Remix) and Own Little World (Drop Remix) for Celldweller, and Doomsday Party (Drop vs Piano RMX) for Sybreed. As well as two remixes on Soilwork's latest album, The Panic Broadcast, which include Distance (Drop's Electrip Enhancement) and The Crestfallen (Drop's Syber Revision).

6.Drop, a band made of William Learmouth and Jill Bryson, circa 1987. They played live and recorded a single that was never released. 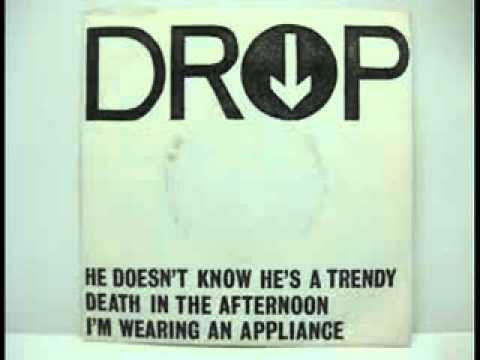 He Doesn't Know He's a Trendy 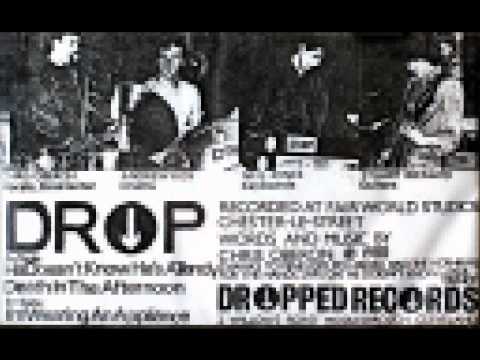