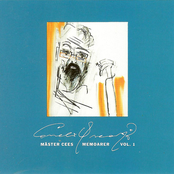 Cornelis Vreeswijk (8 August 1937 – 12 November 1987) was a Swedish/Dutch singer-songwriter, poet and actor, born in IJmuiden in the Netherlands. His first Swedish album, Ballader och oförskämdheter (Ballads and rudenesses), was released in 1964. His first Dutch album was released in 1972, after ten successful Swedish albums. He emigrated to Sweden with his parents in 1949 at the age of twelve. He was educated as a social worker and hoped to become a journalist, but became increasingly involve...

He emigrated to Sweden with his parents in 1949 at the age of twelve. He was educated as a social worker and hoped to become a journalist, but became increasingly involved in music, performing at events for students. His idiosyncratic humor and social engagement is still gaining him new fans. Cornelis Vreeswijk is often considered as one of the most influential and successful troubadours in Sweden. In 2010 a Swedish drama film, called Cornelis, was made about his life. It was directed by Amir Chamdin.

Cornelis Vreeswijk explained in one of his few interviews that he had taught himself to sing and play in the fifties by imitating his first idols Josh White and Lead Belly. His first album, Ballader och oförskämdheter (Ballads and rudenesses, 1964), was a hit which immediately gained him a large following among the emerging radical student generation. In this period he also played with Swedish jazz pianist Jan Johansson and his trio. His songs "Ångbåtsblues" ("Steam Boat Blues") and "Jubelvisa för Fiffiga Nanette" ("Joyful song for Clever Nanette") are classics from these recordings. His abrasive, frequently political lyrics and unconventional delivery were a deliberate break with what he was later to describe as a Swedish song tradition of pretty singing and harmless lyrics, "a hobby for the upper classes". Influenced by jazz and blues and especially by the singing style and social criticism of Georges Brassens, Vreeswijk "speak-sings" his "insults", and compels his listeners to pay close attention to the words.

His 1965 loose translation of Allan Sherman's masterpiece "Hello Muddah, Hello Fadduh" remains beloved to Swedes as "Brev från kolonien" (Letter from the summer camp) decades later, and could be said to have passed into folklore.

A political singer with a bohemian lifestyle, Vreeswijk remained controversial in the sixties and early seventies, idolized by his fans but disapproved of by many others for his "rude" language and persistent interest in "unsuitable" people like prostitutes and criminals. Some of his records were blacklisted by the public broadcasting company Sveriges Radio. During this period, he not only wrote and recorded songs now considered classics, such as "Sportiga Marie" ("Athletic Marie") and several affectionate salutes to the ever less employable "Polaren Pär" ("My Buddy Pär"), but he was an actor on the stage, receiving considerable critical acclaim, most notably as Pilate in the Swedish version of Jesus Christ Superstar, and as Tevye in Fiddler on the Roof. He participated in Melodifestivalen (the Swedish preselection for the Eurovision Song Contest) in 1972 with "Önskar du mej, så önskar jag dej", which finished sixth. He also appeared in movies, including Svarta Palmkronor (Black Palm Trees, 1968), which was filmed on location in Brazil. Spending four months in Brazil began Vreeswijk's lifelong interest in Latin American music and social and political conditions, later seen for example in his Victor Jara album of 1978.

Later in his career, Vreeswijk was to gain increasing fame and a wider audience both for his songs and his other work. He published several volumes of poetry in his lifetime and left a considerable manuscript legacy of poems which have been published since. He also became an important musical interpreter of the works of other people, recording the songs of Carl Michael Bellman, Evert Taube, and Lars Forssell. His fresh, bluesy renderings of Bellman and Taube, who had up to then been classics belonging to the "harmless" tradition that Vreeswijk despised, were artistic and commercial successes which extended his fanbase. The choice of Bellman was significant: Bellman's lively, romantic, pastoral, drinking and sometimes bawdy songs have gained him the somewhat undeserved reputation of being a drunken womaniser. Vreeswijk may have enjoyed the association of being "something of a Bellman himself".

Vreeswijk's own best-known songs of the later seventies and early eighties tend to be dark in tone, like "Sist jag åkte jumbojet blues" ("Last time I Went by Jumbojet Blues", a metaphorical bad trip) and "Blues för Fatumeh", both addressing heavy drug addiction. Even though in this period Vreeswijk was a prey of tabloid scandal and was in the news for his drinking problem and his debts (about both of which he spoke with frankness) rather than for his achievements, he remained highly creative and productive and he is also known as the co-writer of the Hep Stars song "Speleman" which was released for their album Songs We Sang 68'

Towards the end of Vreeswijk's life his reputation soared again, aided by the televising of some highly regarded nightclub shows, and by Agneta Brunius' TV documentary Balladen om den flygande holländaren (The Ballad of the Flying Dutchman) in 1986. By the time of his death from liver cancer at the age of fifty, Cornelis Vreeswijk had become an icon of the Swedish music scene, and he was honored with burial at the cemetery of Katarina kyrka, a national cemetery in Stockholm. In 2010, Cornelis, a movie about his life, premiered in Swedish cinemas. Norwegian singer Hans Erik Dyvik Husby (previously in Turbonegro) played the role of Vreeswijk.

In 1966, the Dutch broadcasting organisation VARA invited Vreeswijk to the Netherlands. He translated several of his songs into Dutch, and wrote a couple of new ones. One of his songs, "De nozem en de non" ("The Greaser and the Nun"), was released as a single, without much popular success. His first Dutch album was only released in 1972, after ten successful Swedish albums. 100,000 copies of Cornelis Vreeswijk were sold, and the single "Veronica" became a big hit after it was picked up by the pirate radio station Veronica. His old song "De nozem en de non" was then re-released with much success. His later albums could not match the success of the first one, and Vreeswijk never achieved the fame in the Netherlands that he did in Sweden.

Nowadays, only "De nozem en de non" is still known by the general Dutch public. Vreeswijk still has some fans in the Netherlands, however, and in 2000 the Cornelis Vreeswijk society was founded.

One reason for his lack of popularity in the Netherlands was the impression that Cornelis Vreeswijk was a bit old-fashioned. Because of his long stay in Sweden, the Dutch pronunciation and idiom that he had learned to speak in his youth were out-of-date in the seventies and eighties.

Although he was fluent in both Dutch and Swedish, the latter became his primary language. His Stockholm-accented Swedish was famously witty and expressive, and in an interview he once suggested that the process of learning the language in his teens might have energized his use of it: "It doesn't just fall over you like when you're a baby and fed daily with words and food. You become freer, less respectful. ... Swedish is such a different language. Pure, distinct, beautiful. It has few synonyms. But they're many enough for me". 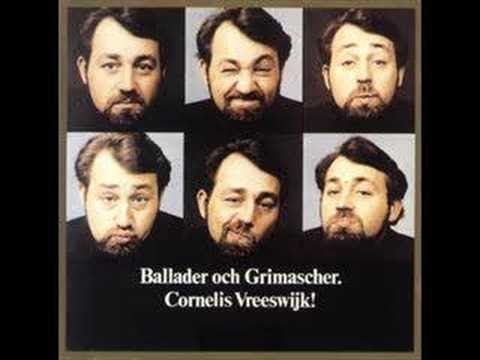 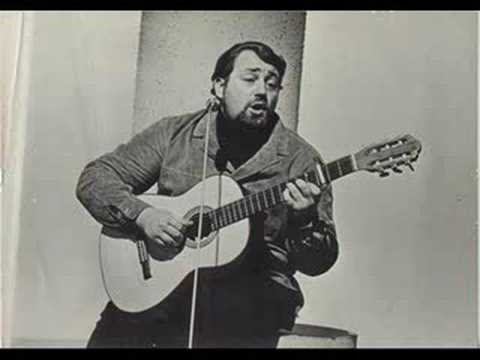