#1 Bobby Taylor, (Washington, DC, February 18, 1934 - 22 July 2017) was an American rhythm & blues and soul singer. As a producer and solo artist, Bobby Taylor contributed to several soul recordings, both inside and outside of Motown. Taylor is most notable for discovering and mentoring The Jackson 5. With Bobby Taylor & the Vancouvers a soul band from Vancouver, British Columbia, Canada, he recorded for the Gordy Records division of Motown Records in 1968. They had a top 30 hit single, "Does Y...

#1 Bobby Taylor, (Washington, DC, February 18, 1934 - 22 July 2017) was an American rhythm & blues and soul singer. As a producer and solo artist, Bobby Taylor contributed to several soul recordings, both inside and outside of Motown. Taylor is most notable for discovering and mentoring The Jackson 5. With Bobby Taylor & the Vancouvers a soul band from Vancouver, British Columbia, Canada, he recorded for the Gordy Records division of Motown Records in 1968. They had a top 30 hit single, "Does Your Mama Know About Me".

Taylor was raised in Washington. As a young man, he moved to New York City and sang in doo-wop groups with singers who later joined successful acts such as Frankie Lymon & the Teenagers and Little Anthony and the Imperials. In 1958 he began his music career as a member of The Four Pharaohs, who released a few locally-selling recordings in the Columbus, Ohio area.

In the early 1960s, while they were in San Francisco, Taylor met Little Daddy and the Bachelors, made up of vocalist Tommie Melton, guitarist Tommy Chong, bassist Wes Henderson, pianist Bernie Sneed, drummer Floyd Sneed (later the drummer for Three Dog Night) While in Calgary they were known as the Calgary Shades. The word Shades in the group's name referenced the fact that the band was interracial. Chong (later famous as one-half of comedy duo Cheech and Chong) is half Chinese. The other members were black, white, and Aboriginal. Taylor was of African-American, Puerto Rican, and Native American heritage.

"Little Daddy & The Bachelors", recorded a single, "Too Much Monkey Business" / "Junior's Jerk". Melton and Chong opened a Vancouver dance hall in 1962 called the Blues Palace, which was formerly a movie theatre. They brought in the Ike & Tina Turner Revue who had never been to Vancouver before. They drew a small crowd and Melton and Chong broke even on that one.

Although Little Daddy & The Bachelors built up a small following, things soured when they went with Chong's suggestion and had themselves billed as "Four Niggers and a Chink". (or, bowing to pressure, "Four N's and a C") before taking on the moniker Bobby Taylor & the Vancouvers.
In 1965, Supremes members Mary Wilson and Florence Ballard heard the band — whose repertoire consisted primarily of Motown covers — at the Elegant Parlor in Vancouver, and alerted Motown CEO Berry Gordy, Jr.. Gordy brought the Vancouvers to Motown Records in Detroit, Michigan, and signed them to his Gordy Records imprint.[1] By this time the evolving lineup consisted of Taylor, Henderson and Chong along with guitarist Eddie Patterson, organist Robbie King, and drummer Duris Maxwell (aka Ted Lewis), the latter three having come as a package when the original Vancouvers merged with another local group, the Good Shepherds. Claims have been made that future star guitarist Jimi Hendrix played with them in those early days, but Chong has been quoted as saying that any such appearance is a product of Taylor's "imagination."[5] Hendrix and Taylor knew each other from their early days in the Seattle-Tacoma area, and Hendrix's summers with his grandmother in Vancouver. Hendrix later jammed onstage with the Vancouvers in Europe.

The group recorded its debut album, an eponymous release, and their debut single, the Tommy Chong co-composition "Does Your Mama Know About Me," peaked at number 29 on the Billboard Hot 100.[1]

For a July, 1968 engagement at the Regal Theater in Chicago, Bobby Taylor & the Vancouvers had a local-area family band, The Jackson 5, as their opening act.[2][6] Impressed with the group, Taylor personally brought them to Detroit and the Motown offices, arranging an audition for them with Motown executive Suzanne de Passe. de Passe and Berry Gordy were impressed with the Jacksons, and the group was signed to the label within a year.

They released two further singles, "I Am Your Man," (US #85, US R&B #40) produced by Nickolas Ashford and Valerie Simpson, and the Smokey Robinson-written and produced "Malinda" (US #48, US R&B #16).[7] The Vancouvers ended up performing in support of Motown artist Chris Clark. Tommy Chong and Wes Henderson were fired by Clark and Motown producer Johnny Bristol for missing a gig to apply for Green cards.[5] The group broke up shortly afterwards, when Chong attempted to have the Vancouvers' contract halved, so that he, Taylor, and Henderson would constitute the group, while Robbie King, Eddie Patterson, and Ted Lewis would simply be regarded as sidemen and session artists. Taylor auditioned for the then-vacant lead singer position in The Temptations (following David Ruffin's expulsion from the group), but was turned down.

After the Jackson 5 signed to Motown in March 1969, Taylor became the group's first producer. He supervised the bulk of their first album, Diana Ross Presents the Jackson 5, recording the Jacksons on a number of soul covers, including The Miracles' "Who's Lovin' You". Berry Gordy would later move the group to California and take personal control of their sound. Although Taylor would briefly join the Jacksons in California, he did not receive credit for working on the group's early singles such as "I Want You Back" and "ABC" alongside Gordy's team known as The Corporation. In addition to those, he produced most of their covers of older rhythm and blues songs.

As a solo artist, Taylor was shifted to Motown's V.I.P. label and continued as a solo artist. Although his "Oh, I've Been Blessed" later attained a cult status, Taylor's solo singles failed to sell well. By 1971, Taylor had departed Motown because of a financial dispute, recording sporadically into the mid-1970s.

Taylor later successfully sued Motown for a substantial amount of money. Despite that, the group's recording of "The Bells I Hear", the song they recorded Marvin Gaye, who produced the track, shelved and reformulated into two separate tracks by The Originals' "Baby I'm For Real" and "The Bells", found on the two-volume CD Motown Sings Motown Treasures, has become increasingly popular. Moving to the United Kingdom, Taylor started an offshoot group, Bobby Taylor & the New Vancouvers, and recorded an album for Ian Levine's Motorcity Records. His later musical efforts were tempered by bouts with throat cancer, which he had treated by various holistic doctors. 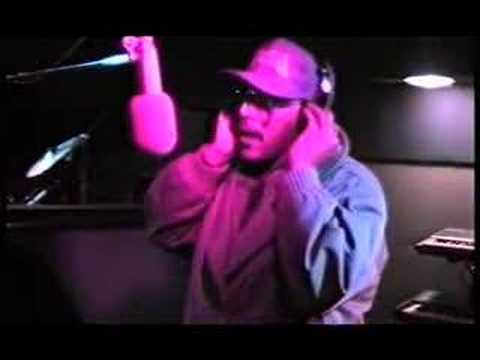 Does Your Mama Know About Me 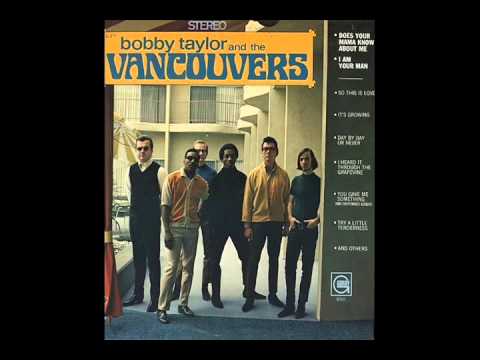 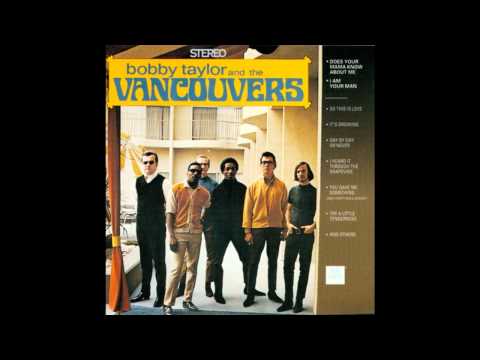 Bobby Taylor And The Vancouvers - I'm Your Man