The Weekend Isn't Over 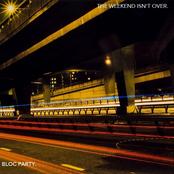 Bloc Party have been together since 1999, with names such as Superheroes of BMX, The Angel Range, Diet, and Union, before settling on Bloc Party in September 2003. Band members Kele Okereke and Russell Lissack have formed the fulcrum of these various incarnations, and were subsequently joined by bassist Gordon Moakes who answered an advert in the NME, and most recently drummer Matt Tong. Lissack and singer/guitarist Kele Okereke first met in 1998 in Essex, where Lissack had grown up and Okereke attended school. Lissack attended Bancroft's School and Okereke attended Ilford County High School until 16 then Trinity School for sixth form. They bumped into each other again in 1999 at the Reading Festival and soon after formed the band Union.

In 2003 they changed their name from Union to Bloc Party. The name is a play on block party, a name for an informal neighbourhood festival, which might hire a local band as entertainment. The band have said that the name was not intended to be an allusion to the Soviet Bloc or the Canadian political party Bloc Québécois; the absence of a 'k' is purely for aesthetics.

However, the band's bassist, Gordon Moakes, said on the group's official internet forum that it was more a merging of the eastern "blocs" and the western "parties", in the political sense. Moakes notes that the name was not driven by politics, but rather it "looked, sounded, seemed fine so we went with it."

In November 2003, Bloc Party had their track "The Marshalls Are Dead" featured on a compilation CD called The New Cross released by Angular Recording Corporation. Soon after they released their debut sngle "She's Hearing Voices" on the then fledgling record label Trash Aesthetics.

The band got their break after Okereke went to a Franz Ferdinand concert in 2003, and was able to thrust a copy of the single into the hands of both Franz lead singer Alex Kapranos and Radio One DJ Steve Lamacq. Lamacq subsequently played the song on his radio show, labeling the track "genius", and invited them to record a live session for the show.

The buzz generated off the back of the single sparked some A&R interest, leading to another single "Banquet", this time released by the label Moshi Moshi, and to the eventual signing with indie label Wichita Recordings in April 2004.

Bloc Party's own variation of spiky guitar rock draws on influences such as The Cure, Gang of Four, The Smashing Pumpkins, Sonic Youth, Pixies, Joy Division, and XTC, but the band says that some of these bands are just comparisons. Does that last bit even mean anything?

The drumming on Bloc Party songs is often influenced by the London dance and R&B scene whilst the guitar demonstrates typical indie sharpness with alternative panned chords and fast chord picking. To achieve their unique guitar style, BOSS echo effects equipment is implemented and is particularly apparent on the track "Like Eating Glass".

The musical style of A Weekend in the City is more varied, however, drawing influence particularly from more expansive sounding bands, including Radiohead. As large as Bloc Party has been over recent years, they are still in their youth. They have developed unique songs and sounds, but they are still trying to find their own personality. The song "Flux" was released at the end of 2007 as an add-on to A Weekend in the City. The band is coming to terms with its growth and development, and should find itself with its next album.

Their debut album Silent Alarm, released in February 2005, was met with critical acclaim and broke sales records, being voted by NME critics as the 2005 album of the year and reaching #3 on UK album charts (selling platinum in the UK). The second single from the album "So Here We Are" made the top 5 on UK charts. Further singles "Banquet" (which reached #13 in NME's "Top 50 singles of 2005"), "Helicopter" (which featured on the FIFA 06, Marc Ecko's Getting Up: Contents Under Pressure, Project Gotham Racing 3, Burnout Revenge and Guitar Hero III game soundtracks) and "Pioneers" (July 2005), whilst failing to repeat this success, managed to make dents in the UK top 20. The animated video for the single "Pioneers" was number one in the NME video charts for 4 weeks and was made for a tiny budget in four weeks by the Shoreditch based Mini Vegas design agency.

Even though the band was met with good reviews from critics in America, Bloc Party failed to break through to the pop or rock charts in the US.

Bloc Party became one of the most popular new bands of 2005, and the established electronic group The Chemical Brothers soon collaborated with Okereke for "Believe", a track on the Brothers' Push the Button album.

An album of remixes of tracks from Silent Alarm was released at the end of August in the UK. This remix album, Silent Alarm Remixed, retained the album's original track list and includes remixes from the likes of Ladytron, M83, Death from Above 1979, Four Tet and Mogwai.

During July, they recorded two new tracks (titles were given of "Hero" and "Two More Years") with Silent Alarm producer Paul Epworth. The latter, "Two More Years" was released on October 3 to coincide with their October 2005 UK tour. The songs were released as an EP titled Two More Years, accompanied with a re-release of Silent Alarm, which included "Two More Years" itself along with former single "Little Thoughts". The single format of "Two More Years" contained a remix of "Banquet" done by The Streets, for which a video was also recorded.

The band also contributed the track "The Present" to the Help: a Day in the Life compilation, the profits of which benefits the War Child charity.

The single "Banquet" was sampled in 2006 by DJ Green Lantern for a track with Apathy, Tak (of rap duo Styles of Beyond) and Mike Shinoda. The track, entitled "Bloc Party", appears on Green Lantern's Fort Minor: We Major mixtape.

The band released their second album, called A Weekend in the City on February 5, 2007 in the UK and February 6 in the United States. The album debuted at #12 in the Billboard 200 with 48,000 copies sold. It became available via the UK's iTunes store a day ahead of schedule, on February 4, and reached the #2 spot in the Official UK Chart. The album was produced by Jacknife Lee. The first single, "The Prayer", was released on January 29. This single had been located on their MySpace since November 22, 2006. The next single, "I Still Remember", is their first American single. In the build up to the release of the album, Zane Lowe aired a live set from Maida Vale featuring a mix of old songs and new ones on his evening radio show on BBC Radio 1 on January 30, 2007. On February 1, 2007, A Weekend in the City was made available to listen to for free through the band's official MySpace page.

The band's first gig following the release of AWITC was on February 5 at Reading Hexagon. It was broadcasted live on BBC's Music Station 6 Music that night as well.

Bloc Party played in the Live Earth concerts on July 7, 2007 and T in the Park and the Oxegen Festival that same weekend, as well as Glastonbury and the Reading and Leeds Festivals 2007.

On 27th October, Bloc Party showed "Flux" to the world at their gig during the BBC Electric Proms, and on November 12th, they released the single. It charted well, reaching #8 in the UK charts, and was well received both by critics and fans, despite the new electronic direction.

On 7th July, Bloc Party premiered new track "Mercury" on Zane Lowe's BBC Radio 1 show following a countdown timer on Bloc Party's website. The track took a bold new direction, moving away from guitar rock, with an experimental electronic sound. The track charted at #16 in the UK charts when it was released as a single on the 11th of August.

On the 18th of August, in a webcam chat with fans, they announced that their third album, Intimacy, would be released for download on their website on the 21st of August. The album contained
On the 23rd and 24th of August, Bloc Party played second headliners before The Killers at Reading & Leeds Festivals, opening their set with "Mercury", and also playing "One Month Off" from their new album. They also played an entirely unplanned encore of "She's Hearing Voices".

The album Intimacy was released in physical formats on October 27th, featuring additional tracks, such as current single "Talons".

In June 2009 it was announced that a new single, "One More Chance", would be released on 10 August 2009. The song did not appear on Intimacy and was produced by Jacknife Lee. It was played for the first time on BBC Radio 1 on 18 June. In an interview with Zane Lowe immediately following the premier playing of the song, Okereke said that he was in the studio but that he couldn't "tell you anything"
In July 2009, Okereke stated that the band did not have a current recording contract and had no obligation or pressure to release a new album in the foreseeable future; he went on to suggest that the release of a fourth album is on an indefinite timescale

On 31 October 2009 the band played their final gig of the Bloctober tour at Bournemouth International Centre, home town of drummer Matt Tong. This was recognised as the band's last gig before going on hiatus.

"We're probably going to pick up again with Bloc Party later this year. I mean, we wrote a lot of new material on the last tour. What does it sound like? It's hard to say. It's still just sketches of songs. The feel will come together in the studio. We're definitely not splitting up, there's a lot more creative life left in it yet."

During the summer tour of 2013, drummer Matt Tong left the band. Lissack told a Canadian newspaper, the National Post that the band were planning to take an indefinite hiatus following their appearance at the Latitude Festival on 19 July.

In September 2014, Okereke stated that Bloc Party were working on a fifth album. In March 2015, bassist Gordon Moakes tweeted he had parted ways with Bloc Party. Bloc Party unveiled their new line-up at two intimate gigs in the Los Angeles area (19 August 2015 at The Glass House in Pomona and 20 August 2015 at The Roxy in Los Angeles). Following these performances, Bloc Party also subheadlined FYF Fest in Los Angeles on 22 August 2015. At these shows, the band confirmed that they've finished recording their next album. The shows marked the live debut for new bassist Justin Harris of the Portland, Oregon, indie rock outfit Menomena, who had previously opened several Bloc Party U.S. tour dates in April 2009; and drummer Louise Bartle, who was accidentally announced a month earlier as Bloc Party's drummer by instrument manufacturer Natal Drums.

In a performance at Maida Vale, Bloc Party gave "The Good News" its live debut; hours later, "The Love Within" was featured as "Hottest Record in the World" by Annie Mac on BBC Radio 1. Okereke revealed the band's upcoming fifth album is set to be titled Hymns. The album's release was later confirmed on social media as 29 January 2016.
Read more on Last.fm. User-contributed text is available under the Creative Commons By-SA License; additional terms may apply. 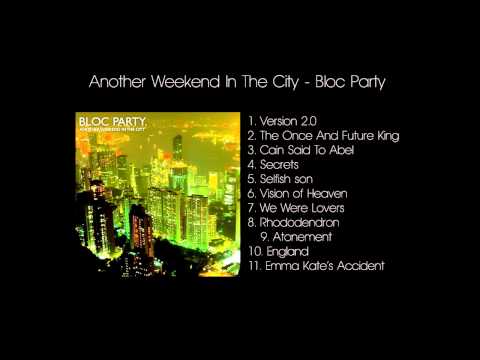 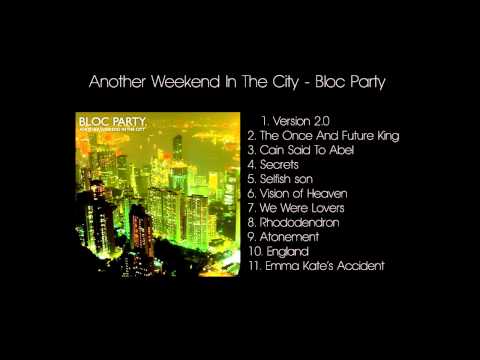 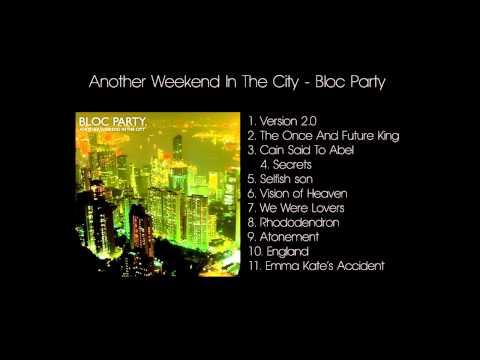 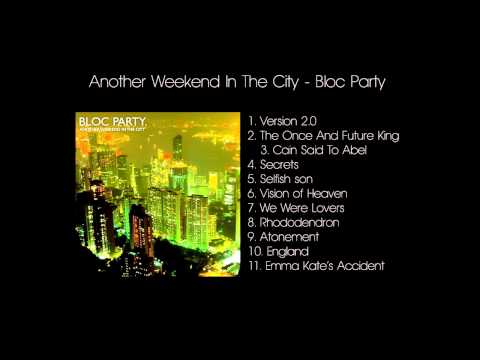 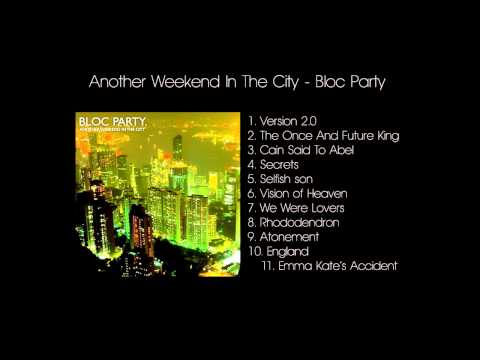