What do you call a female Brooklyn songwriter with a smarmy, witty lyrical edge, a band that plays as if they'd just stepped out of the Brill Building, and a voice that's got the squeaky charm of Gwen Stefani's? Howabout: the next Lily Allen. “I was the surprise,” says April Smith, the bonus baby her parents won late and whose moxie and dash astounded everyone she met. Today, she remains a welcome bolt: a loose-lipped, cocked-hip gal whose music and mien could buoy the Titanic. The girl from...

What do you call a female Brooklyn songwriter with a smarmy, witty lyrical edge, a band that plays as if they'd just stepped out of the Brill Building, and a voice that's got the squeaky charm of Gwen Stefani's? Howabout: the next Lily Allen.


“I was the surprise,” says April Smith, the bonus baby her parents won late and whose moxie and dash astounded everyone she met. Today, she remains a welcome bolt: a loose-lipped, cocked-hip gal whose music and mien could buoy the Titanic.

The girl from Toms River, New Jersey, swears she cultivated her magnetic personality in order to impress her much older and “insanely talented” siblings. Watching her brother play with his band, and her sister paint murals on her closet doors, young April wondered, “How do I sneak into their world?”

Actually, “sneak” isn’t quite the word. April crashed her older siblings’ practice sessions, living room talent shows and parties. “I’d put on a show anywhere,” she recalls. At the “big, bad” shindigs her sister threw when their parents were away, our plucky heroine hopped on the dining room table to sing selections from her Cabbage Patch Kids tape. When her siblings held extemporaneous living room talent shows, she begged entry. Absent any raid-able events, she would belt out at the DMV or the supermarket.

As she took her place in the family, April developed a muscular, mellifluous voice and high-flying showmanship. Her mom adored Queen (”If you didn’t know a Brian May solo in the first few notes, you weren’t her child”) and her dad gave her his old 8-track tape player, letting her buy Elvis and Led Zeppelin tapes at yard sales. During summer vacations with Aunt Cricket and Uncle Fred, April discovered songwriters like Tom Waits and Kinky Friedman, stealing Fred’s cassettes and absorbing observational story-songs in a backyard tent. Waits so impressed April that she felt compelled to dress up - using Fred’s hat, pipe and Junior Mints (she placed them on her teeth) each time she played his music.

Looking back, April figures that’s how her younger self interpreted Waits’ fearlessness. “He’s not trying to be anyone else,” she says. “I really respect that. If you’re always honest in your art, you can’t fail.” She’d learn to blend this artistic nerve with her innate goofiness and the childlike naivete that led her to conclude that if John Lennon was in heaven, “he must be God”; and that the guy on Uncle Vinnie’s glittery postcard wasn’t Jesus Christ, but Robert Plant. Failing to “differentiate between religious Gods and musical Gods” felt right to April. Music was omnipresent in her life, and certainly uplifting. She worshiped it.

When she began to write songs, she incorporated elements musical and otherwise, some contradictory in theme or vibe - to anyone but April. Because she’d been so diversely inspired, it was a cinch to stitch together Queen’s majesty, big band’s sunny optimism, the terror and despair of horror flicks and Edgar Allan Poe writings, and the cottonmouthed wit and poignancy of Wes Anderson films. From this influential primordial stew came April’s new album Songs for a Sinking Ship.

The album’s sound was informed by the ’30s and ’40s, juke joints and cabaret, the Andrews Sisters and, of course, Waits. Smith covers a wide range as a singer and songwriter, from the heartbroken ballad “Beloved” to the cheeky tell-off “Stop Wondering” and the sexy swagger of “Wow and Flutter.” Her voice swoons and seduces, and then escalates to breathtaking peaks, backed by piano, upright bass, drums, guitar, horns, ukulele, accordion and even, when the occasion warrants, a suitcase used as a bass drum.

It’s the music of a precocious child that never lost her curiosity and verve, and of a beguiling woman who clutches music to her chest and embraces new twists to her character. She bounds between happy, anxious, sassy, seductive, melancholy, and murderous - sometimes in the same song. “I’m a little sarcastic and sometimes I’m a little bit creepy,” she says. She’s also silly and whip-smart, with a strangely sage outlook. “I judge people by how long they’d survive in a slasher movie. If I think they’d make it to the last ten minutes, they’re alright!” She knows it’s “kinda weird,” but “it all comes out just the way I want it to in my music.”

Her songs and her playful, confident performances - in which she’ll wear a tutu and impishly tease her band, The Great Picture Show - now win her fans everywhere. In 2008, she opened a national tour for singer-songwriter J.D. Souther (the Eagles, Linda Ronstadt). This summer, Rolling Stone branded April and the GPS one of “30 Bands to Watch” at Lollapalooza, while Showtime’s Californication featured “Terrible Things” in its season three promo and BBC 6 played “Colors” on Introducing: Fresh On the Net. She also appeared on the syndicated TV show Fearless Music and did sessions with WRXP-FM’s Matt Pinfield and WFUV-FM’s Rita Houston. It’s a helluva start for an unsigned artist who was, at the time, without a current release.

Songs for a Sinking Ship, incidentally, boasts fan funding through Kickstarter.com, an invitation-only website that helps musicians, artists, authors and other creators keep their work independent. By offering gifts of anything from homemade cookies to personalized songs and house concerts, April exceeded her $10,000 goal by a fat third, raising over $13,000. “It’s really nice to know that your fans care enough to help you reach your goal, but go further than that to help you make the record you want to make,” she says.

It’s because April offers them something that, ironically, is no surprise at all. In her music and her day-to-day, April is the same stunner onstage as off. No bells, no whistles. Just the tutu, and the very real menagerie in her soul. “If you want people to believe in what you do, you have to show them that you love what you’re doing.” What’s more, you gotta serve it straight-up, like her childhood sensei Tom Waits and recent inamoratos Dr. Dog. Not only is it clear that they love what they’re doing, she says, “they don’t sugarcoat it. It’s like, ‘Here ya go - this is what I made. Take it or leave it.’ I think that’s very respectable.” Read more on Last.fm. User-contributed text is available under the Creative Commons By-SA License; additional terms may apply. 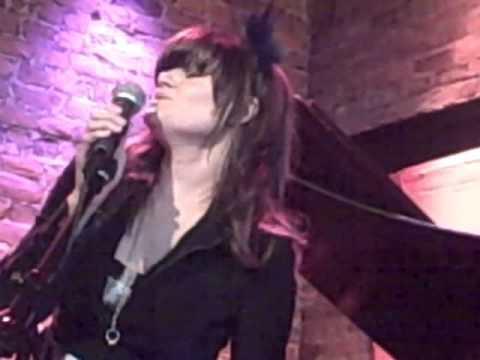