One of the most popular Lithuanian rock bands ever, ANTIS began as a New Year party joke. Back in 1984, a young architect Algirdas ‘Pablo’ Kaušpėdas was working as the chairman of the Kaunas architects' union. He had to organise a New Year party at the city union’s hall and decided that the best thing would be to form a band and play some music. The joke proved to be so good, that rumors about the new exciting band spread all over the country. At the very beginning of 1986 ANTIS was joined by...

One of the most popular Lithuanian rock bands ever, ANTIS began as a New Year party joke. Back in 1984, a young architect Algirdas ‘Pablo’ Kaušpėdas was working as the chairman of the Kaunas architects' union. He had to organise a New Year party at the city union’s hall and decided that the best thing would be to form a band and play some music. The joke proved to be so good, that rumors about the new exciting band spread all over the country.

At the very beginning of 1986 ANTIS was joined by the horn section from Vilnius. Fellow architect / composer / trumpeter / guitarist Petras ‘Sniegius’ Ubartas took over the musical leadership of the band so Pablo could concentrate on lyrics and create charismatic images for himself and the band. Soon ANTIS (Duck in Lithuanian means also false mass media sensation) was invited to play at the semi-underground festival in Vilnius University and a couple of other similar gigs. But the turning point of ANTIS career was legendary Lituanica’86 festival, where ANTIS for the first time played in front of the elite audience, composed of the local and guest musicians, official and underground journalists, hardcore music fans and so on. Their show overshadowed Russian rock stars Aquarium and Bravo who were supposed to be the biggest attractions of the festival. Overnight ANTIS turned to the biggest sensation in Lithuania and one of the best rock bands in the whole of the former Soviet Union.

Algirdas ‘Pablo’ Kaušpėdas built ANTIS a spectacular live show featuring painted faces, musicians dressed in suits and various gadgetry including anything from red slogans to motorbikes and spaceship models on the stage. All this stage extravaganza was used for production of 3 video clips, later included in the 1986 musical film Kažkas Atsitiko (Something Happened). But probably the main thing was the lyrics. In-your-face uncompromising criticism of the Soviet regime was very timely during the Perestroyka years. Following the changes of their status ANTIS leaders consequently improved the line-up until it became a perfect professional machine. From the musical side ANTIS started under the heavy influence of Talking Heads and other new wave bands - one of their biggest hits was cover version of Men At Work song. Lately Sniegius and horns added a lot of Zappa - like structures, but at the end of their career the music became too complicated and professional to compare with the lively DIY/punk spirit of the early days of ANTIS.

In the highest times of revolt ANTIS staged a number of massive concerts, played to crowds of hundreds of thousands of people. They toured throughout almost all the European countries and the USA. ANTIS history is well documented, because the band used every possible occasion to record their music, be it in the studio or at a gig. So the first live-in-the-studio recording was made during the Kažkas Atsitiko soundtrack recording sessions. In the end of 1986 the local Melodya branch invited ANTIS to its Vilnius studio where the band recorded their eponymous debut album. The LP was released in 1987 and became one of the best-sold records in the history of Lithuanian show business.

The second album was recorded in 1988 in Warsaw’s CCS studio and was supposed to be released as an independent LP. But Melodya’s resistance to press the records significantly delayed and finally ruined the plan. The fight took almost a year, so it was decided to record some new material. The last recording session took place in a Vilnius studio in 1988. Those songs with some selected numbers from the ‘Polish’ session appeared as Anties Dovanėlė (Antis' Prezzie) in 1989. In fact it became their farewell present.

The second half of 1989 and 1990 brought the final series of tours including the appearances at prestigious festivals in Italy, Austria, Germany, France and USA, where they participated at the NY New Music Seminar and played at the CBGB.

In 1990 Pablo decided to quit and became Algirdas Kaušpėdas again. He briefly tried a political career, but soon returned to his profession of architecture. The rest of the band kept on rehearsing and even tried a couple of new vocalists. They composed some music, but without the vocalist/frontman it had no real sense, so ANTIS split. Some of the musicians returned to non-musical jobs, some still play. Algirdas Kaušpėdas runs a big design company and is still a very popular figure in Lithuanian musical and cultural life.

In 1994 Zona/BMK released two ANTIS cassettes. Mini album Bjaurioji Antis (Ugly Antis - an allusion to The Ugly Duckling) features the earliest punkish home made recordings from Kaunas period, when they played without horns. Retas Paukštis (Rare Bird) brings all the songs which haven’t appeared on Melodya albums. The last album Geriausios Dainos is ‘the best of’ compilation, released on both CD and MC formats by Zona/BMK in the May of 1995. On this release are all the most popular and the most interesting songs of ANTIS, which makes it probably the most recommended and valued item.

Reanimated in 1996, the Lithuanian Rock March witnessed a kind of Antis reunion. The March staged three open-air concerts in three biggest Lithuanian cities during the last week of the Summer 1996. Assembled from some ex-members and some session musicians but fronted by Algirdas Kaušpėdas, the Antis Orchestra played a series of spectacular sets during Rock March concerts.

One more ANTIS transient revival took place in the end of 2003. Zona Records released almost all their extant recordings on 4 CDs (Kažkas atsitiko, Antis, Ša! and Dovanėlė) and in a box-set Visa Antis. Close to classical line-up of the band got together to celebrate this occasion. Promotional campaign Visada Antis (Antis Forever) consisted of small exclusive gig at Galaxy Club, unplugged-style appearance on LNK TV and full-scale ANTIS extravaganza in Vilnius Concerts and Sports Palace.

Regenerated in 2007.
Read more on Last.fm. User-contributed text is available under the Creative Commons By-SA License; additional terms may apply. 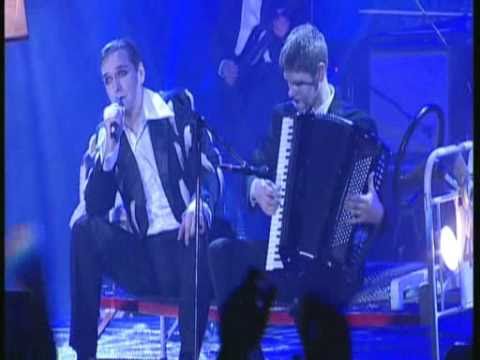