AM Radio is an American rock band fronted by singer Kevin Ridel, a longtime personal friend and former band mate of Weezer lead singer Rivers Cuomo. The band has released three studio albums and is currently working on a fourth. Bio: How do you explain AM Radio? They forge ahead with signature streams of infectious pop one minute, only to confound the ear with bristling chunks of righteous rock the next. If you're lucky enough to hear a snippet of their much-touted Elektra debut, Radioactive,...

AM Radio is an American rock band fronted by singer Kevin Ridel, a longtime personal friend and former band mate of Weezer lead singer Rivers Cuomo. The band has released three studio albums and is currently working on a fourth.


Bio:
How do you explain AM Radio? They forge ahead with signature streams of infectious pop one minute, only to confound the ear with bristling chunks of righteous rock the next.

If you're lucky enough to hear a snippet of their much-touted Elektra debut, Radioactive, you'll find the southern California fivesome has struck just the right balance to this inspired blend--and no wonder. Fronted by effusive singer/songwriter Kevin Ridel, AM Radio first earned their seal of approval from none other than Weezer founder Rivers Cuomo.

Ridel and Cuomo have been friends since their heady Connecticut days (Vernon CT, to be precise, about a half hour from Hartford), manning a band they had ballz enough to call Avant Garde. Ridel has formed his share of rock bands since, with the industrious Cuomo serving as his ..1 fan. But it wasn't until the summer of 2001, when Cuomo came to the rescue of Ridel's most recent group, Peel, the precursor of AM Radio, that the music world began to notice Ridel's considerable talents. "Peel recorded an album for Beyond Records which never came out," says Ridel. "Rivers saw we were frustrated and helped us get out of our contract. He offered to manage us and get us in front of the people who could do us some good. He's been a great, great friend." Says Rivers: "I've known Kevin for a long time and he's always been my favorite songwriter in the world."

AM Radio's drummer, Joe Higgins, also a surviving member of Peel, (and Ridel's previous band, Ridel High) says he too, had been following Ridel's career even before joining up with the charismatic frontman. "We had a mutual friend that was in a band around '98, so we would go and check out each other's music. I remember the actual night when I heard there was an opening for a new drummer in his group. I sat in my room thinking 'man I really want to do this. I really want to be in a band with that singer.' I knew his writing style, I knew the kind of sound he wanted to achieve."

The "sound" Higgins refers to is jagged, jarring, always-catchy pop that is as in-your-face as it is melodic. Says Ridel: "I love to write hooks. I love to write for the sake of writing. I don't sit down and say 'this is going to be on an AM Radio album.' I'll be anywhere and get an idea. I usually phone in the melody to my answering machine. That's where the songs usually start. I just put it down and then go work on the chords. Then I bring it to the band. I trust them. I'll say this is the verse, here's the pre-chorus and chorus. I show them the shell of the song and they fit it in."

The vexing AM Radio chemistry has resulted in pristine gems like the dizzying blasts of ultra-pop on "Taken For A Ride," or the heavier, knotted pull of "Hush." Guided by accomplished rock producer Howard Benson (P.O.D.), Ridel's elastic vocal prowess manages to ride roughshod one minute, and emote an irresistible shimmer the next.

"I think there's two songs on the album that kind of define the spectrum of AM Radio," says Joe. 'Hush' and "Cold Blue.' They kind of show the box we're working in right now. 'Hush' is more aggressive, riding on that crash cymbal. 'Cold Blue' is a showcase for the beautiful side of Kevin's voice. You could point to those songs and see why I'm in this band."

The other players, California native guitarist Jason Moore and British-born guitarist Rowan Robertson fuel the magnetic live arsenal of the group, which was an essential component in the making of their new album. In fact, AM Radio's formidable rhythm answers the age-old question: Can a pop band rock?

"After playing over 100 shows last year, Rowan and Jason started to feel more comfortable developing harder riffs," Joe explains, "'Taken For A Ride' and 'Tomorrow I'll Be Gone' were written after we got off the road. "Those kinds of songs are a result of what we learned about each other playing live."

You can't help but hear a smattering of influences, hard and soft, in Ridel's mercurial songwriting. True to his open-arms code, he cites an eclectic group of idols, everyone from Richard Butler of the Psychedelic Furs, Robert Smith of The Cure, to Journey, and, of course, Weezer. "I was playing bass in this band until I saw the Psychedelic Furs a year or two ago at the House Of Blues in L.A.," he says, laughing. "I saw Richard Butler and what he can still do up there with just a microphone and I was like 'screw it,' I'm just gonna' be the front-man." His respect for a crooner/conjurer like Butler also reveals the romantic side of Ridel. Though there may be a wink or two to fans in some of AM Radio's snappier songs, there's no put-on here. Ridel loves the pure joy of writing and performing music. "I remember going to one of my friends' house after soccer practice when I was just a kid and seeing his drum set. I was just overwhelmed with it. We'd sing and drum over records. I said I have to be part of this. I believe in the positive aspect of music. You won't find any negative energy around AM Radio. We love what we're doing."

When asked if he has advice for any future rockers searching for the same kind of inspiration now, he smiles. "Be persistent. Don't compromise your music. And always, always, keep it on the up." 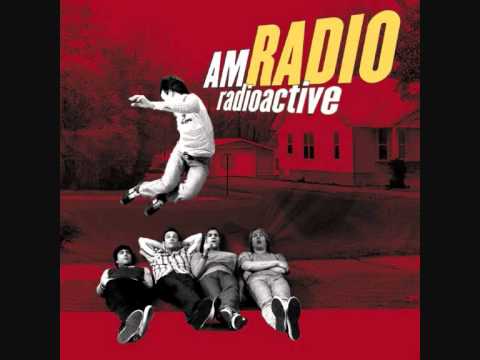 I Just Wanna Be Loved