Oh, it’s complicated.
In fact, everything about this band is complicated. But have no fear - we’ll break it down for you.
Let’s start with the fact that Alpha Galates, up until recently were called The Hollow. Matthew Wagner, Karen Wagner and Todd Lefever formed The Hollow in 2001. The band has been based in Toronto for six years and have been a committed touring act for much of that time. They released three independently-produced albums through the Swarm Theory Music label: Natio in 2002, and Vita and ab Gehenna in 2004. ab Gehenna was a digital-only release. Another album, Obitus, was due out in 2006, but was released on iTunes only.
Original live drummer Colin Snortland (aka Nilock Lang) left, and singer/guitarist Matthew Wagner moved to drums. Rowan MacPhail and Harmony came on board and the band changed its name to…Alpha Galates?.
“First Gauls is the literal translation,” explains Wagner. “It all ties into the Priory of Zion stuff, and apparently it’s real. I saw it in a book called Rule By Secrecy and I just liked the name. There was some resistance group in World War II in France that was helping free Jews from Paris. I mean, there’s not really any evidence that any of this stuff exists outside of Dan Brown books and a few documents, but it’s all quite interesting.”

Further on the motivation for the name change, Wagner explains that “We added Harmony on keyboards and piano, which was a direction I always wanted to have. And, it just sort of fit with this opportunity to make another record. We added a second guitar player, Rowan. So I thought, change the name so we can do whatever we want. It’s a lot more classically based now; not just based on heavy guitar. We have arpeggios and piano!”

“It was kind of a rebirth,” adds bassist Karen.

With respect to the title of the album itself, Karen points toward “provoking thought, getting people to question things, not just taking everything at face value, not following the herd. A Stimulus For Reason sounded good and fit those ideas.”

Adds Matthew; “A lot of it is about awakening from your haze, the haze of life. People get trapped. I found myself, even five years ago, when I was writing a lot of these songs, I would just wake up and want to change something about where I was at. So, A Stimulus For Reason relates back to life, my attitude, this idea of totally changing my perception of life.”

Make no mistake, the sum total of the band’s quasi-debut album is quite heavy and crushing and note-dense beyond belief. All of that barely begins to describe the wide-angled hard rock complexity - as well as the surging, roiling intensity - one experiences as some of these Herculean tracks build toward fraught fruition. An immediate influence that comes to mind is Tool, but then it’s not hard to start feeling the progressive death metal of Opeth deep within the record’s dark, lush landscapes, as well as a certain Roger Waters solo vibe, perhaps Porcupine Tree, even, on occasion the blistering riffing of Megadeth.

With respect to key vocal inspirations, Matthew cites Beach Boys and their seminal Pet Sounds record as an influence, as well as George Martin and The Beatles. But he is also quick to name-check modern era King Crimson, Queen, Tool, Black Sabbath, Meshuggah, and Devin Townsend’s Strapping Young Lad as well.

As that vocal list as much as everything else might illustrate, it’s still quite complicated. Take the song “Obitus.” Matthew and Karen smile at each other knowingly when asked about this one. Forget progressive metal; this is progressive psychedelia, “Obitus” moving toward and inside a parallel universe of song structure previously unimagined, let alone ever explored.

“2 Months In,” the first track on the album, is an explosive modern metal masterwork that dramatically stomps into view after an elegiac, almost spiritual intro sequence.

Elsewhere “The Darkest Eyes” stands out as the simplest, most innocent song on the record, the only one not kaleidoscopically fractured of light and heat. What seems like a lifetime of musical sky-straddling later, Alpha Galates approach, late in the sequence of exotic events, the apocalyptic with “Entropy And Chaos,” a strange mix of slide rule prog, early ‘80s Crimsonian angst, and modern emo. Still, Matthew can laugh and distill its 11:00 minute whirlwind of sonics down to a quip and a chuckle, indicating with a point of a finger across the table to Karen, “That’s about her.”

The only obvious question – obvious to any musician who dares to try dissect what is going on all over this record – becomes: how in the world do you pull this all off live?

It’s quite doable,” says Karen, allaying all fears of Alpha Galates proving unable to pull off this magnum opus of music live. “Maybe to somebody outside, and not so immersed in it, I can see it being kind of complicated. But I guess when it’s your project and your thing and you are so involved in it, the songs are what they are, and you don’t ever mix anything up. Each song sounds like a series of movements. From beginning to end, it flows. It just becomes kind of ingrained in you.”

And maybe that’s the lesson to be learned here. That, in the end, it doesn’t have to be as daunting or quite as complex as it initially has been made it out to be. Suffice to say, that after only a handful of listens to this substantial, action-packed album, melodies begin falling out of it like cherries from the tree, and hooks embed themselves in one’s consciousness effortlessly and at will. With some ardent dedication on behalf of the listener, A Stimulus For Reason opens up and becomes an enormous challenge fully realized and achieved, and, on the part of the spectator, progressively understood and finally, actually… hummable. 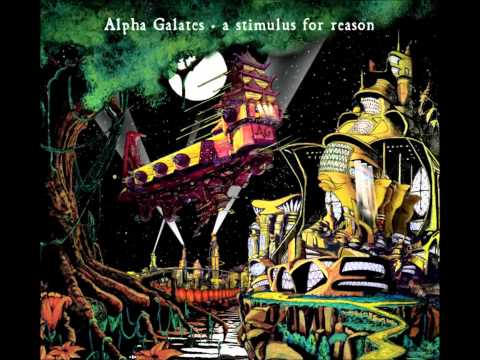