19 WIOSEN – it means just „nineteen springs”... This project was born in 1989 in Lodz, central Poland. It is almost one million habitants city, called “polish Manchester” because of XIX century factrories architecture, fallen industry and full of unemployment and off course... strong tradition of underground and specific alternative music. This strange town with jewish, russian and german roots is probably one of the biggest film and cinema centers in the world. Very important town about the hi...

This project was born in 1989 in Lodz, central Poland. It is almost one million habitants city, called “polish Manchester” because of XIX century factrories architecture, fallen industry and full of unemployment and off course... strong tradition of underground and specific alternative music. This strange town with jewish, russian and german roots is probably one of the biggest film and cinema centers in the world. Very important town about the history of polish Jews and the Holocaust. Before strong industrial center and proud of socialist Poland, now full of beggar families living from recyckling, old “gits” with tatooed faces and ... artists. The main center of industrial music, crust punk, techno, drum’n’bass electro and dark goth wave.. But anyway 19 Wiosen created their oryginal style, very influented by the spirit of Lodz.
The authors of the project were two fans of the pre – punk (f.ex.The Stooges), glam rock, new romantic and dark avantgarde fans – Frank, the guitar player and Pryt – the poet and singer. Later they meet the electric organ player Fagot, one of the most original persons in the Lodz punk scene. He was big fan of J.S. Bach organ music, barocco flame and... italo disco music. Such surrealist mix should create something new. First, 19 Springs recorded their favourite cover songs, from Alphaville and Drupi (italo music) to polish 30s divas (Hanna Ordonówna) and 60s big bit and “estrada” musicians (Piotr Szczepanik, Filipinki).
First lyrics of 19 Springs was subjects of unhappy love mixed up with hard, “no hope no fear” minded dark poetry of Pryt (f.ex. “...fucking shit all the time”).
Almost all of 19 Springs players were active squatters this time.
First casette-albums was recorded in 1993 – „Co kazda chwile” (“Fucking shit all the time”)and „Zmarnowany kwiat” ( “The Fallen Flower”). On the second tape the girl vioce appeared – Anna Bursztyn joined to the band. Lyrics of this album treat a lot about the true stories from Lodz criminal chronicals (and the fallen heroes of the Lodz wasteland), written in very personal way. Later 19 Springs started playing their first gigs (almost all of them took part in small punk clubs and squats). They played new songs, more agressive and punk and less big bit sound. Buzzcocks and Stooges guitar solos met barocco and romantic organ passages. Pryt shouted agressive and selfdestructed lyrics, but the music was very “hit” and even reminded sometimes 70s and 80s pop songs. Peaople got really crazy on their gigs, the spirit of pogo and atmosphere of scandal was never like that from the legendary 80s punk times.. Important thing was also an image: Pryt in specific for Lodz black industrial uniform and skinned head. Frank – like real git/rock,n,roll guitarist from the old times and Fagot in peruque and “Mozart” clothes taken from the theatre, with a long tail. The best known hits of 19 Wiosen come from this time („The Distance”, „The Stench”, „The Agony”, „The Doom”...).
In 1998 19 Wiosen took part in split vinyl album with Starzy Singers - surrealistic grunge/punk from Warsaw. It was realeased by Malarie Records. Then, the band finished playing for ... 5 years.
This time Frank made his own punk project Pustostator, Fagot started experimenting with electro music (Procesor Plus), Pryt took part in industrial band Jude, as a VJ. Frank and Fagot made also their surrealist heavy metal project, Lord.
19 Wiosen made their come back in 2004. Frank moved to the countryside and he decided not to play in this band any more. So, the only old members of the crew are Pryt and Fagot. New guitar player was Kostek from Super Girl Romantic Boys, playing electronic Casio thrash guitar. The rhythm section was taken from the old members of Jude – Lukasz and Szymon. New 19 Wiosen played few gigs in Poland with success (Lodz, Warsaw, Poznan, Wroclaw). They also participated in the international festival “No culture without subculture” in Minsk, Belarus. They played together with projects like 2/5 BZ (Turkey), Vialka (Switzerland).
In 2005 19 Wiosen recorded their new stuff - the album called „Piekno” (“The Beauty”). It was realeased in 2006. They recorded also one TV program included 5 songs from the new album. In the meantime, Pryt had released his first poetry album - “The Hospital of Helena Wolf”.
In 2006 bass player Lukasz moved from Lodz to Edinbourgh, so 19 Wiosen started to play with new bass guitarist – Olek Gemel. They prepared new songs and in 2007 they recorded an album called „Pedofil” ( „The Paedophile”)..
2008 it's a year Collaboration with painter Wilhelm Sasnal and few gigs in London, Brighton, Rotterdam, Amsterdam, Berlin and of course Lodz. In 2009 the band new metarmorphosis and new bassist player Bartek Adamiak ( Kostek Usenko left the crew). On 1st november 2009 we wanted issue new material "Farewell With The World". Read more on Last.fm. User-contributed text is available under the Creative Commons By-SA License; additional terms may apply. 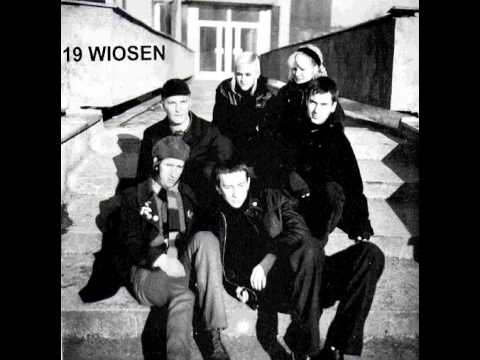